This little poem comes from a book my father kept on the ledge above his desk. When he was out I would often read it.
I enjoyed the shape and size of the book,and its binding. The pages are gilt-edged,it is covered in dark green cloth, the corners of the covers are rounded and the spine has a delicately traced floral design in gold. I would guess at an end-of-the-nineteenth century date.
It fits comfortably into the hand: I have always liked small books.
The title? 'American Humorous Verse'.
This is the poem I liked best. I would read it out loud to myself, trying to speak like a Dutchman,and laugh as I imagined the action! I shall copy the spellings exactly. 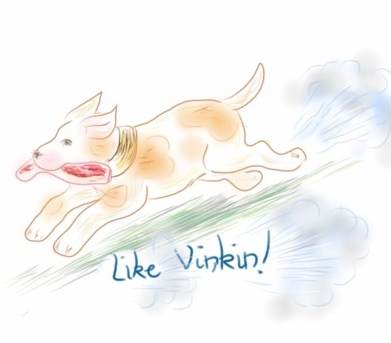 DER MORAL
Der moral is, dont interfere
Vhen droubles is aroundt;
Der man dot's in der fighting crowd
Vhill get hurt I'll be pound.
Mind your own peesness, dot is pest,
In life she vhill be found.
Yaw! Yaw! schoost so,
I pet you.
< PrevNext >