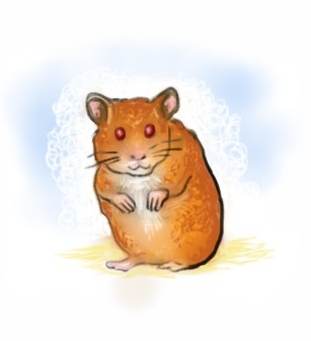 During the ten years I was teaching in Corpus Christi, a Catholic Junior High School in Leytonstone, I was able to set up an Animal Club. No doubt this would be subject to all kinds of health and safety restrictions today, but we were able then to be creative and use our initiative,and I was very happy in that school. In time I will tell you many stories about this popular club, but let's begin at the beginning.

First of all we had two hamsters. One,a female,was a beautiful creamy beige. The other, a male, was golden-brown with a white band like a wide collar round his neck and shoulders. We named the male Milk and the female Biscuit, for obvious reasons.

One wonderful morning I arrived to find four tiny,pink baby hamsters snuggled up in a heap in the cage. Milk was immediately moved out of the marital home, and Biscuit nursed her little ones in comparative peace. They grew rapidly, and as soon as they were self-sufficient were given homes of their own.

There was much discussion about suitable names for the new arrivals. I drew out a pedigree form and it was pinned to the wall. I explained that racehorses were often named after their parents,and that physical characteristics could affect the choice of a name. This is what we finally decided:

One of the babies was exactly like his father,white collar and all;

we called him Little Marvel (Marvel was the name of a brand of dried milk).

One of the babies was like her mother, beige with black eyes.

We gave her a Biscuit name, Petit Buerre.

The third was a chocolate- brown.

She was called Gypsy Cream,after my favourite Biscuit.

The last baby won a breeders' prize for us at a show. He was technically known as a cinnamon hamster, and had beautiful ruby-red eyes.

He was called Ginger Nut.

Several of the parents became very interested in our hamsters. They gave us special black- and-white carrying cages,and on occasional weekends I would go with a small group of children to a show. Ginger Nut won a rosette for us,which was proudly displayed on the notice-board.

Later we had other creatures: two terrapins, Gilbert & Sullivan, a grass-snake called Elvis,and a rescued baby hedgehog (which I took home and eventually released) called Milligan. And for a while we had a number of snails who raced for Charity. But that is another story.....

Oh,and we were given a pure white hamster with pale pink eyes,called Lily the Pink.

And there is a story about her,too...