Many years ago I found a scarab ring in a charity shop. I was delighted,because my young sister was at the time deeply interested in Ancient Egypt. At my first opportunity I visited the British Museum and was able to speak to someone in the Egyptian Antiquities Department,who tactfully but very kindly broke the news that the ring was a worthless piece of 'jewellery' produced for tourists. I was mortified, but soon forgot all about it and moved on.

Imagine my surprise when,a month or so later,I received a letter from the Museum, informing me that there was shortly to be a sale of Ancient Egyptian artefacts at Sotheby's, and that lot no. 127 might be of interest to me,as it was a mixed lot containing ushabti figures and scarabs. I first used my dictionary,as I had no idea what ushabti figures were,and found that they were small faience figures ,often wrapped in mummy-cloths,used to protect or serve the mummy in the afterlife.

The next problem was, could I afford this lot? I was only earning £5 a week as a new teacher,and my husband earned about the same. This did not leave much spare for luxuries,and I presumed that ushabti figures would not be cheap. Out of our joint income we set aside £5 a month for a clothing allowance,and the tin contained £14,(at that time a small fortune!), so it was settled that I would attend the sale and bid for Lot 127.

I put great thought into what I should wear,and decided to go for a 'middle-class Country Look'. My wardrobe was not extensive,but I needed to look (I felt) worthy and respectable. I wore a tweed skirt, sensible brown shoes, a hand-knitted warm jumper and a mock sheepskin jacket,and carried a traditional wicker basket; I felt I looked fit for the fray! My cousin worked in Bond Street at the time, and one of her male workmates offered to accompany me(I had no idea where Sotheby's was).

I had heard that at an auction one should neither move nor speak,as it was possible to purchase expensive items without even realising it,simply by scratching one's nose. This was not good news,as I have never been either still or silent for more than five minutes at a time! When I arrived at the Auction-house, I was tense and nervous. My £14,£2 of which was in small change,was in a cloth bag in my wicker basket,and did not feel adequate for its task.

There was a large room,with heavy furniture around the edge and a long,highly polished table in the centre. At this table were seated a score of serious,important-looking gentlemen(apparently representing Foyles and other interested groups). The auctioneer stood at a tall lectern. The room was crowded ,and we found a place at the back. Now I had to be silent and still until Lot 127!

However hard I tried, I could not see anybody bid.

What if I couldn't even BID?

The first lot was a wooden headrest,and went for several HUNDRED pounds! I clutched my little bag of money and began to lose hope as lot after lot was sold for more money than I could ever hope to earn.

Still nobody spoke or moved. How were they bidding? I braced myself, as Lot 120 went for £250.

I put up a tentative hand.

Who had bid? I had seen nothing.

I prayed, and put up my hand, trying not to make it look like a five-pound bid.

I stood in silence. I had reached my limit.I only had my pound or so of housekeeping in my purse. Could I risk that?

The room was silent and still.

" Against you at the back,madam," he said.

This was my last chance!

"Can I say fifteen?"

Everyone turned round,even the important men at the long table,to look at this strange middle-class woman in her mock sheepskin coat,who had SPOKEN!

"Certainly,madam," said the auctioneer. He was gently smiling.

There were no more bids,and I won the lot!

At the end of the auction we went to collect our goods.Everyone else paid by cheque. I tipped out my loose change and in front of a long queue it was all counted.. 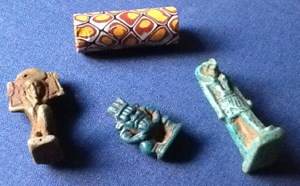 When I got home,I examined my winnings. I had several ushabti figures, and some small faience gods - Horus, with the sun-disc on his head, Thoth, the god of wisdom, a hippopotamus-god of fertility, and Bes,a dwarf god of music and mirth. There was a broken pottery figure and a group of tubular venetian glass beads, and finally, two scarabs! I was triumphant. I phoned the Brirish Museum and made an appointment to meet an expert who would tell me more about the different objects.

When I finally met him, he was (as before)very kind and tactful. He told me that I had done very well to get so much for £15. The small faience gods were 500 BC, the beads were used to pay the local egyptian workers who helped to dig or carry articles from the tombs. The pottery figure was the oldest artefact of all.

He left the scarabs till last.

They were both fakes!