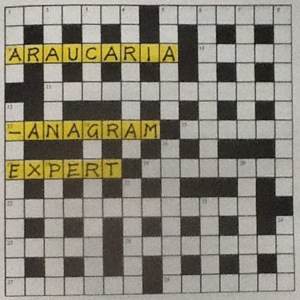 My father completed the Telegraph Crossword every day. Even at the age of 88 he would,each morning,take the special clipboard he had made,fold his paper neatly,and set out to solve the puzzle. Occasionally, through the years, we might be asked to tackle a word which had escaped him; but this was a rare opportunity.

During the week he died, when I was in the 'Front Room' tidying up before the funeral, I caught sight of a copy of the Telegraph on the chesterfield. Almost without thinking I picked it up. It was open at the crossword page. Two words were incomplete,and I finished them. Immediately I felt a pang of fear and guilt,thinking to myself,"Dad will be cross!", and then, directly,"Oh,no, he won't, he's dead!"

My sister and I follow in our Father's footsteps. She completes several of the Sunday paper crosswords and uses his clipboard. I buy books of cryptic crosswords - The Guardian, The Times, The Telegraph - and always keep one by my bed, in case of sleeplessness.

Of all the compilers, Araucaria is my favourite. His anagrams are truly amazing.

Here are two of his best clues:

At the time the crossword was printed,Lord Archer lived in Keats' house in Grantchester and was lying low after a well- publicised law suit!

Perhaps the best of all his crossword clues is:

The boy's descent which lifted up the world.

The entire clue is an anagram of

While shepherds watched their flocks by night

All seated on the ground.