Pudding in a Pillowcase

One wonderful weekend in the 1960s, while I was enjoying time with my special group of girls at Plashet School, I took them camping. A great deal of preparation was necessary. We made lots of lists, I remember; lists for packing, menu lists,' how to put up a tent' lists,lists of food supplies.
The girls were wildly excited;most of them had never been camping betore ( my young daughter,who came with us,was an old hand!) When the great day arrived,we gathered outside the school.
We were booked at the Debden site for two full days and nights, and intended to spend Friday and Saturday nights there, under canvas, with our meals cooked over an open fire(by ME!). There were18 pupils(one was to join us each day), my daughter,and three resident grown-ups. Several other staff planned to join us(they weren't going to miss the fun!) and George was to bring our two dogs down on the Sunday. 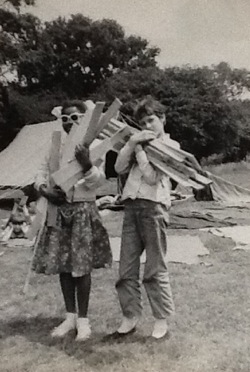 Several other groups were on the site when we arrived. One particular bunch of boy scouts obviously doubted our ability to survive-we were girls,of course! They stood some way away,watching us as we erected tents and made a fire,and making derisory comments.
We rose to the occasion with faked aplomb; I delegated,sending two of the girls off to collect firewood,working with a few to make a brick fire base and surround,setting two groups to lay out canvas &poles on the grass and begin to erect our tents,and others to gather the suitcases,cooking utensils and supplies.
Little by little order rose out of chaos,and our critics went away disappointed. We were lucky with the weather. In an hour or so we had a roaring fire,our tents were up and standing,suitcases were on bedrolls,dinner was cooking(sausage,mash and beans)and everyone was in a circle with a warm drink,singing.
It was getting dark,the forest smelt green and the moon was rising(something these young Eastenders had maybe never smelt or seen before) and we were all beginning a great adventure together. As for my daughter,I hardly ever saw her;she was one of the group,and slept and ate with them. They took her to themselves...
The girls all went willingly to bed,although not to sleep! Torches were lit,talking went on until quite late,and there was a lot of giggling. Mrs. Horwood,my trusty support, wrapped in protective clothing, tipped up her camp bed,and was stuck with her feet pointing to the tent roof. We were helpless with laughter-no example to our charges-and it was some time before I got her level again.
During the night there was a dramatic moment. I heard a scratching on our tent(no knocker) and a little voice whispered,"Mrs. Deal"! In came one of the girls,obviously worried. She said,"Marian(not her real name) is bleeding,and she's crying"... These were 12yr-old girls, and one of them,having been told nothing about 'the facts of life,' was terrified because she had begun menstruation!
I had prepared for bad weather,cuts and bruises,and cooking for 20 on a fire,but not for this! I told the messenger to brng Marian to me. She was a frightened little girl. I sat with her on my bed and gave her the good news that she was growing up fast,and this was only a beginning. I did my best,and she went to bed comforted and sorted,I hope. Eventually I got to sleep. It had been a busy day! 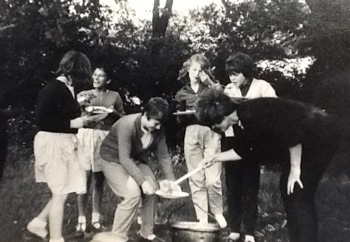 The next day was bright and sunny. I made up the fire, and cooked them a big dixie-ful of porridge. The girls lined up with their bowls,and I felt like Mrs.Bumble! We had toast and marmalade ,and everyone was excited and happy.
We discussed a duty rota. Two would be responsible for wood collection,washing-up would be done by two different girls each time,each tent would be responsible for tidiness,two would prepare vegetables,and so on. As the whole thing was play,nobody minded. The showers and toilets were in a separate building,so that was easy.
We were to have stew for midday,followed by treacle roly-poly(all menus were chosen by the class).
During the morning several staff turned up,and there was an expedition into the forest. The girls came back with all kinds of small treasures-bark,and stones,and pretty leaves- which probably did not reach home. They had been running down a big slope,and sitting on a fallen tree -for them, a forest was a wonderful place,with smells and sights completely foreign to a London child . 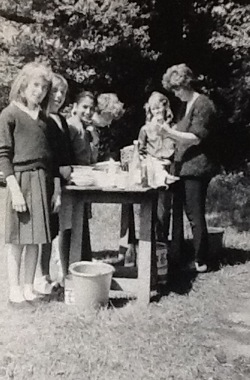 I had made a large,long roly-poly pudding,enough for 25 people. I had no pudding-cloth large enough, so I cooked it in a pillowcase,which just fitted into the big dixie! The girls were hungry after their adventures, and tucked in heartily. The stew,full of lamb and vegetables,soon disappeared; but the pudding, the pudding!
It was so admired by everyone,and it was HUGE! I was told, "Oh, Miss,you are a really good cooker!" There was a period of rest after dinner;some lay in the sun,some read or talked together. Washing-up over, we played a game of rounders. Later,we sat in a ctrcle and played singing games. 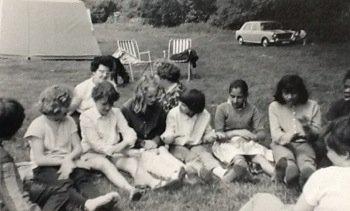 When it grew dark,we gathered round the fire for songs and stories,each with a mug of warm chocolate to drink. We were thoughtful,because this was our last evening together under the stars.
Bedtime was calmer-they were experienced campers now-and they slept almost at once.
The next day we had many visitors-George with the two boxer dogs, Mrs.Seakins with her Airedale,and a few more staff. The day was spent in talk & play,eating and exploration in the forest,and at four we sadly had to pack everything for the homeward journey.
Perhaps our greatest triumph was when the leader of the scout group came over and congratulated us on our little camp.It had been a lovely weekend,and for the girls an exciting new experience.
I still consider the pillowcase pudding one of my greatest culinary achievements!
Maybe, my brave attempt at rounders was an achievement too! 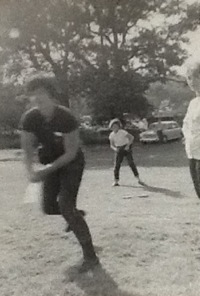