Where are they now? Sweet Memories

When I was a little girl, I spent my pocketmoney very,very carefully.
At eight I was given 3d a week,a 'threepenny joey',and there was considerable choice,even for such a small coin.
Some of my favourite sweets have completely vanished,so I thought I would describe some of them; it would be a pity if they were lost for ever.
There was not so much packaging then: sweets were sold by weight, for children usually 2 ounces,and put into paper bags. Boiled sweets were sticky,and became glued to the bag in one's pocket,and like most children I usually consumed a proportion of damp paper with the last few sweets.
In the sweetshop the heavy glass sweetjars stood on shelves,and I would stand for some time surveying the display before making my selection. Most of the boiled sweets are still available; rhubarb and custard, sherbet lemons,humbugs,satin cushions,bulls'-eyes and pear drops can still be bought,albeit in plastic packs and much larger quantities. But some sweets have disappeared.

My absolute favourite sweetmeat was rock candy, which I have not seen for sixty years. When I went shopping for my Mum,she would let me spend 1d in the Coop Bakery and Sweetshop, and there I spent it all on Rock Candy. 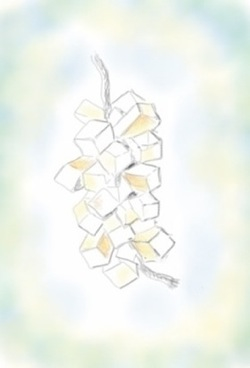 Rock Candy was not like other sweets. It was chunky and heavy. It was,simply,crystallised sugar formed by hanging a soft white cotton wick in a heavily over- saturated solution of sugar-water. It was beautiful to look at, because the crystals were large and ranged in colour from brown to ice-clear.
The shop assistant had a little hammer, and would tap the candy(which looked like a thick,crystalline glass candle) so that it cracked across. Then she took a pair of sharp scissors and cut the soft white 'wick',and put my prize into a paper bag.
The best thing of all was,that it was not easy to judge accurately how long each pennyworth should be, and I often got more than I had paid for.
I would hold the wick, suspend the chunk of crystals over my open mouth, and slowly lower it until my teeth could crunch a piece off. Nothing in the sweet world could beat that experience,except waiting for a sherbet lemon to release its fizzy acid over my expectant tongue! Sadly,rock candy seems to have gone for ever; sherbet lemons remain,although they used to be made with a thinner sugar shell and a more generous amount of fizz. 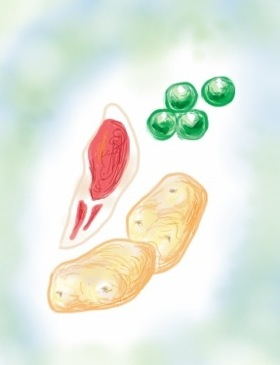 Another preferred sweet treat was known as 'Chops,Peas and Potatoes'.
The three ingredients were made of dolly-mixture materials;the chops were of soft fondant,and the peas(which were over-large) and potatoes(which were not peeled) were more sugary and hard.
It was a matter of luck whether you got enough chops in your twopennyworth to make balanced dinners for all the invited guests. I was always happy with the potatoes,which were good for sucking or crunching.
Because I lived in Brighton, there were local specialities. Broken rock was rolled in a copper drum with sugar, and ended up a soft and delicious higgledy-piggledy mixture,which was also very good value.And there was a 'pebble mixture',which looked exactly as described - there were large and small sweets,in subtle colours and smooth curved shapes. I found it hard to eat them because they looked so beautiful,and would eat the small ones first.

Another bargain was the 'christmas pudding,' made of the same stuff that 'bananas' and 'prawns' are made of today. I could buy four for a penny(they were a farthing each!)and they were just like a white pudding-basin with a dark brown pudding inside,and a tiny sprig of holly (made of cloth,I think) on top. I remember these little sweetmeats very fondly,and have never seen them anywhere except in the shop round the corner when I was a little girl. 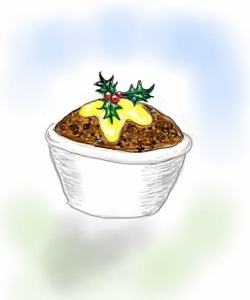 The last of my sweet memories is,I think,an unusual one.
I could buy two of these for a penny. They were called 'sweet and sour sticks'. They were dark brown, hard and shiny,and had to be sucked, like barley-sugar.
At first they were sweet,tasting a bit like burnt sugar; but as you sucked them to a point, they began to be sour, like vinegar almost; just as you began to slow down,little by little the sweet toffee flavour returned.
So it went on, a taste adventure, a roller-coaster of ups and downs, sweet and sour. I loved them,and thought they were very grownup sweets.
Some of the old-fashioned sweets remain,but many favourites have been changed. There was a time when we sucked the sherbet in our Sherbet Fountains through the hole in the liquorice stick,which was strong and tall. There was a time when Walnut Whips had half a walnut inside,sitting on the chocolate floor under the cream.
But Cadbury's Nut Milk Chocolate is still resplendent in whole hazelnuts,and Dime bars have a special nutty taste and crisp texture-both hard to beat. So I must not spoil today by wanting things that no longer exist!
< PrevNext >