As Esmeralda sat and wept, she thought hard about her situation, which she now knew was her own fault. Who could possibly help her?
Then, at last, she thought of little Tommy. He was a fisherman's son; every night at closing-time he trundled up the hill with Esmeralda's rations of cockles and seaweed in a soap-box cart, and each night while she ate he would sweep up and wipe the glass before he locked up and trundled home.
He thought she was better than a flying saucer, and he hated to see her cry;so that when Esmeralda pleaded with him to help her to the beach, he sat down on his haunches and considered.
If 'Erbert ever found him out, Tommy would get a thrashing;so first of all he broke the lock as if there had been burglars. Then he helped Esmeralda into the fish-cart and covered her with her dinner,and they crouched breathless in the shadows until the thunder of the local policeman's feet had faded, and it was safe to go. 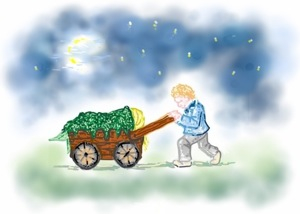 Soon there was a creak-creak of rusty pram-wheels as the soap-box rattled down the slope towards the promenade. Muffled giggles came from the heap of seaweed, and Tommy looked anxiously behind him every now and then: but no-one stopped them,and they wobbled on towards the beach beneath a fairyland of coloured lights.

When they were a long way out on the dark,damp sand, with its lamp-lit pools of water like scarlet satin patches on a soft black cloak, Esmeralda threw off the seaweed and sat up, munching cockles.
She squealed as she dipped the tip of her tail into the icy sea:then she gave Tommy a cold, salted kiss and was off, leaving him to sniff a little and wander sadly home.

Much later,far out to sea, Esmeralda rested in the darkness, paddling her tail and looking back at the sparkling strings of light. She felt a little droopy, thinking of Tommy and 'Erbert( who had meant well, after all);but when she remembered the cruel tank she gave a chuckle of joy and dived.
Down,down,down she plummeted,until she could see the hills and valleys of her sandy home flying up to meet her, and with a twist and a twirl she landed plump! beside her own front door. She was so glad to be back that she quite forgot that she had left her magazine behind.

But I dont think she would have wanted it- do you?
< PrevNext >