Cows in the City

Some years ago,when my daughter was working in the city,we met to have lunch together.
Afterwards we strolled in the sunshine-we were near Leadenhall Market-and took a short cut through an archway into a two-storey shopping arcade,where to my surprise we were confronted by a herd of painted cows! 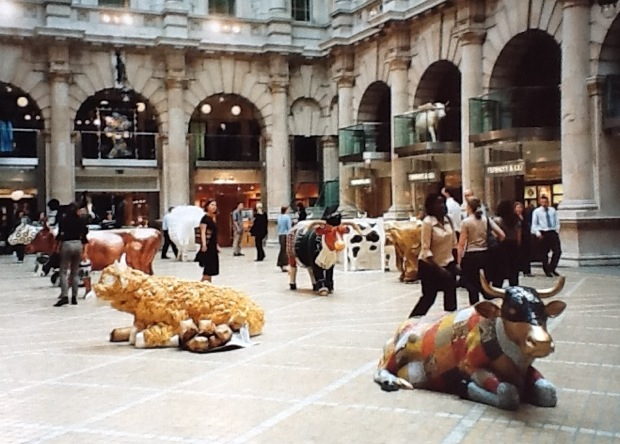 The idea of public displays of painted fibreglass animals has been steadily growing since the time when,in Zurich in 1996, a number of lions,the symbol of the city, were decorated and displayed.

In 1998 Walter Knapp conceived the idea of the first 'Cow Parade',and since then many cities have taken up the idea,using a variety of animals.

In summer 2008 Bath chose pigs; for Liverpool in 2009 it was penguins,& in 2010 there were dragons in Newport, Wales.
In Bristol last year there were gorillas! 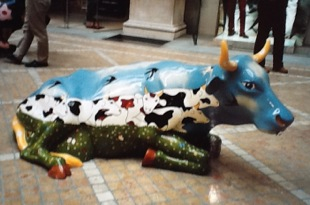 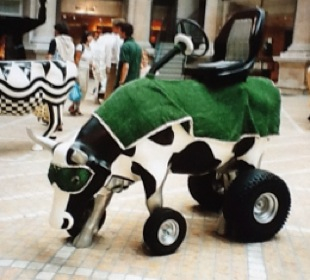 Cows have always been the most popular choice, and now CowParade is a flourishing Corporation; millions of people have seen the exhibitions they have supplied with 'cowcanvasses'. After each exhibition the cows are auctioned,and the money goes to charities; large amounts have been raised in this way.

Oprah Winfrey, Ringo Starr and Elton John have all bought a cow at one of these auctions.
Vivienne Westwood and Ronnie Wood (Rolling Stones) have actually painted cows. 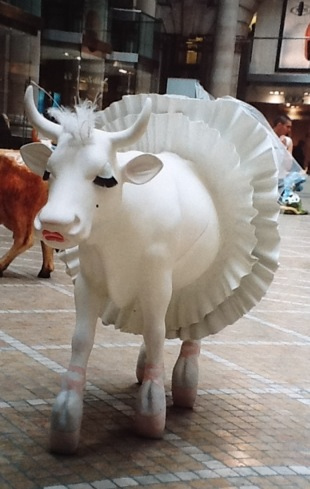 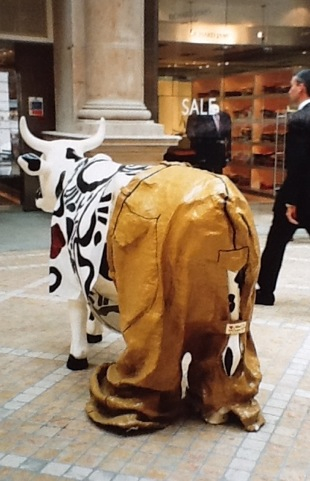 The fibreglass figures in the herd of cows we found were either standing with head up, grazing or lying down,and the artists had displayed great imagination in the way they had decorated them.
Perhaps my favourite was the ballet-dancer,with her long eyelashes, but the cow with baggy trousers amused me too.

Some artists were content to decorate the surface of the cow; hence the stylish lady with flowers on a shiny black 'patent-leather' surface,and in contrast one with a sparkly jewel-encrusted patchwork all-in-one suit. 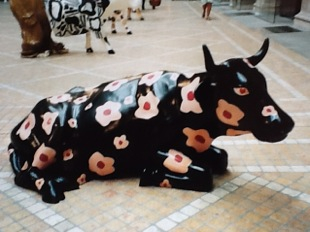 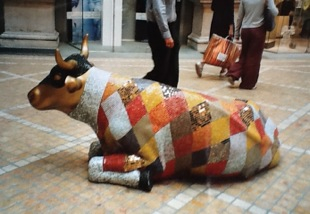 My 'most original' award goes to the battered cow and chips; Mind the Gap cow comes a close second,I think.
The finishing detail on all the cows was absolutely perfect.
I would love to have a cow of my own to paint; I would choose a dark green and cover it with buttercups and daisy-chains. 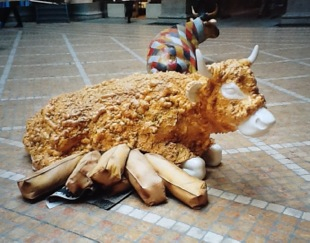 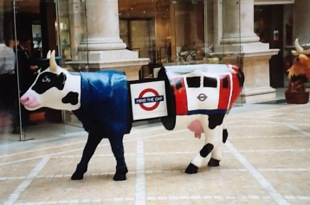 Finally, two cows with ladies in attendance. The copper-coloured one was covered in two pence pieces,and Mary posed as a milkmaid. The shiny black cow was used as a perch by a rather bored and languorous showgirl with Betty Boop lips. 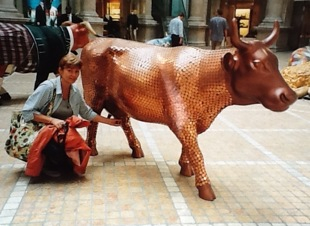 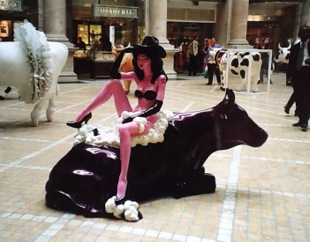 It is possible to buy small china versions of these decorated cows.
I have one,dressed in the uniform of a yeoman warder. It was given me by one of my Sunday-school pupils, who lived in the Tower of London, and I treasure it.
There are many,many different designs. 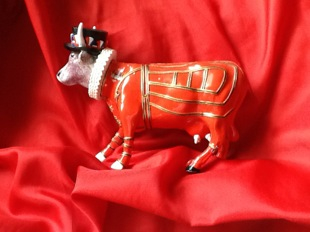 I would SO love to have a painted cow in my garden!
< PrevNext >