I was at Infant School in the early 1930s.
I loved school so much that by eight o'clock I was standing by the front door, waiting for my mother to give me permission to go. The school was only a few hundred yards away, down a steep hill,and I was always very early.

In those days children drank milk at breaktime,but it was not free. It was a halfpenny a day, twopence halfpenny a week.
My father said I did not need milk at school, there was milk at home, so I was not given the required twopence-halfpenny on Monday mornings.
I accepted this without protest; children were not expected to express opinions.

The milk came in small bottles (perhaps a third of a pint?),and the crate was set by the radiator to warm.
In those days they did not have foil tops; instead,they had a waxed,round,cream card lid which fitted snugly into the top of the bottle. A small circle was stamped centrally into the cardboard,so that it was easy to push it open with one's thumb, like a tiny porthole, and insert the straw.
We used to collect the lids,wash them, and make woolly pom-poms with them.

Straws then were REAL straw - yes, sterilised lengths of straw packed into grey cardboard boxes with red lettering. The milk monitor had the job of opening the 'portholes' and pushing in the straws.
Because I did not have milk like the others, I was made milk monitor, which pleased me greatly. It was an EXCELLENT job.

Milk was not homogenised in those days,so a layer of thin cream sat at the top of each bottle.
I would push my thumb into the porthole with my right hand, and while I slipped the straw in with my left I would suck the cream off my thumb.
I had over 30 sucks of cream a day!
To this day I have always loved milk, and I know why! 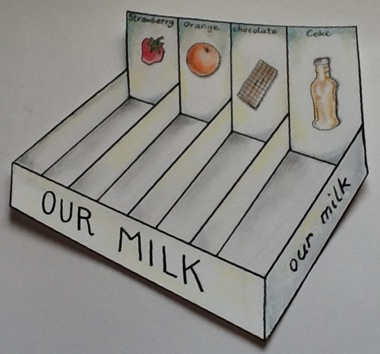 When, much later, I became a teacher, milk was a free gift in primary schools.
I was trained as a senior teacher, but for three years chose to go into the primary sector because I needed to find out why many children were entering senior school unable to read fluently.

I found that many little children in my new class did not like milk; one or two positively hated it.
I had to find a way of making milk seem special, even exciting. I have never believed in forcing children to drink or eat something they do not like.

From a grocery store I obtained a strong white display carton with four sections, big enough to take 36 small milk-bottles.

I asked the children which were their favourite drink flavours (one little boy said 'beer!').
They chose strawberry, chocolate, orange and coke.
I drew a picture for each flavour and wrote the name, and next day took in the new milk carton.
When the milk came, the bottles were taken out of the crate and put into the 4 different sections.

Now the milk was different; it was flavoured,and everyone could choose a flavour.
The day before this we had all saved our red foil tops and they had been washed. This was our milk money.

The children queued for their milk, chose a flavour,paid for the bottle with a red coin, and went back to their seats to drink.

The scheme was a huge success.
Everyone enjoyed the milk they had chosen.
Perhaps the most interesting thing that happened was this; if the strawberry flavour ran out, the monitor would take a bottle from another section and put it into the strawberry one.
The customer would happily accept it once it had been transferred!

Imagination is a wonderful thing....
< PrevNext >