When I was little girl, I liked being ill.
In spite of the sore throat,the headache and the shivery heat, there were very pleasant elements in sickness.

One of my earliest memories is of standing up in my cot(I can remember the blue linoleum beneath me), and trying to call my mother.
No sound came out of my mouth; I was ill with croup.
Finally someone came: I was carried downstairs to the kitchen,and sat on my mother's lap in my cream winceyette nightie before a warm fire while she rubbed my chest with camphorated oil.

Grownups were much kinder when you were ill: they spoke differently,and you became important.
When you were ill there was a fire in the tiny grate in the bedroom.
Usually there was only a faded frill of coloured crepe paper.
Bedrooms had no heating,and in winter there would be ferny ice patterns on the inside of the windowpanes.
Although the fire did little to warm the temperature of the room, it was a comforting sight,and at night the flames made moving lightshows on the ceiling.
As I was always afraid of the dark, I slept happily in the glow. 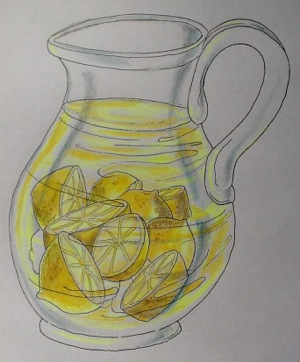 Another benefit was lemonade.

This was only made when body temperatures were high,and it was wonderful!
I am not entirely sure of the recipe,but I know fresh lemons were sliced,skin and all,and put in a big jug with sugar: boiling water was poured over all, and the mixture stirred from time to time as it cooled.
There was no ice(no refrigerators then) but it was the most refreshing drink I ever tasted.

When I was about six, I went on a Sunday-school outing and came back with wobbly legs and a sore throat.
It was lovely.
I sat on the little chair Grandad made,in front of the fire,with a mug of warm milk. I had contracted mumps.
As usual, the discomfort was worth it.
I could hear the coals being shovelled into the hod. There would be a fire!

I can only remember three kinds of medicine.
One was pink,one was brown,and one was white.
If you had measles or chickenpox or mumps,you had pink medicine( I think it was mainly aspirin, and it wasnt nice).
If you had any kind of stomach upset, you had the white medicine. It was thick and peppermint-flavoured,and very pleasant.
If you had a chesty cough,you had the best medicine, the brown one. I am quite sure it contained chlorodyne,and I loved it! Very addictive! 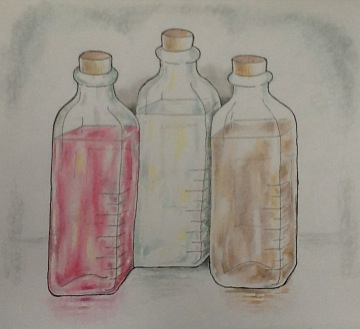 The Doctor rarely visited, because he was expensive.
Medicine-bottles were made with moulded measurements down the side,and adults took great care to be absolutely accurate when dosing.
When I was very little, the chemist would wrap the bottle in white paper and seal the top with red wax.

Diphtheria and scarlet fever were killers of many children in those days,and an ambulance would take the little patient to the fever hospital.
If we saw an ambulance,we would protect ourselves in one of a number of ways: by turning round three times,touching ones lapel, or spitting.
I wasnt allowed to spit, but luckily I survived.

Nowadays, I dont enjoy being ill at all. Lemsip is no substitute for my mum's delicious lemonade!
< PrevNext >