Motorbikes we have Known

The first ever motorbike was a great shock to me,and had completely the opposite effect to the one intended.
George and I were within a few weeks of our first meeting at the East Ham Dramatic Society,and were already becoming romantically connected,although no words had been spoken.
After the rehearsal George said, "Come outside. I've got something to show you." What could he mean?

I went out with him into the darkness, completely unprepared for what followed.
An ancient motorbike was leaning against the wall.
How was I supposed to react?
I hated it, and was terrified of the idea of hurtling along on this rickety contraption (I found,later,that George had spent £40, all his demob.money, on what was a very old machine- so old that it had a gear-change operated by foot, and he had been told it was adapted for a handicapped rider!) 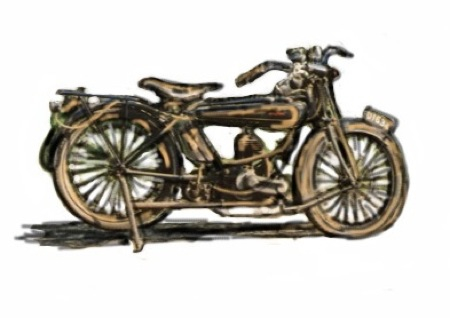 Little did George know that it was at that moment he nearly lost me!
Very luckily, I conquered my fear and climbed on the pillion seat.
Immediately I liked it better; I had to put my arms round his waist quite tightly and hang on!
We rode rather slowly up and down the street,and I gained confidence.

For some weeks I believed,in my ignorance, that if George leaned one way I should lean the other,for balance!
When I observed that other couples were leaning in unison, I began to do the same; George remarked that the bike was going really well!
As I grew braver, we went further afield,to Southend and even Dover.
George and I would sing as we drove through the night;
" I'm tired,and footsore, and weary,
I ache from my head to my toes;
This world seems to be
Mighty weary to me,
Where I'll end my journey, Lordy knows!"

Where this came from, I'll never know; but our voices would rise in the moonlit air as we chugged through village and copse on our way.
We had invested in airforce protective suits from the Army and Navy Stores, and were zipped in,so we did not feel the cold.
We had no money for lodgings, so slept under haystacks(George kept a tyre-lever handy to protect me!) or in shelters at the seaside.

A bad thing about bike number one was that it leaked oil,and once ,on a Clacton run,ruined one of my new blue suede shoes by disgorging thick black goo all over it. I had spent £5,a whole weeks wages,on those shoes, and could not afford any more for some months. I truly mourned the loss of that beautiful blue shoe.... 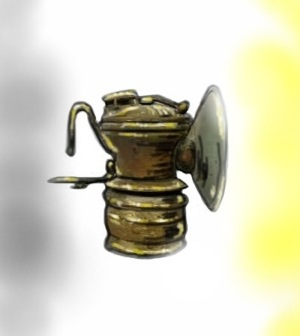 An even WORSE thing was that the bike did not have electric lamps,it was so old; inside it had some kind of white crystals,(it was an acetylene lamp) and water; the water, plus the crystals, produced gas.
There was a reflector which projected the light of the flame.
The useful thing about this was, that it produced WARMTH!

Once, after a night in a field on the way back from Southend, my feet were so cold that George lit the lamp, knelt down in front of me and directed the warmth at my ankles( I pulled my trousers up a bit to accommodate this).
Passing lorrydrivers hooted at us,no doubt thinking George was proposing marriage!

Bike number two was an ex-WD bike. It was not in perfect condition, but had more modern lamps and was more powerful than number one. We painted it (it was rusty here and there) using Woolworths dark green paint, and named it Lassie because it often broke down and DIDN'T come home!

I painted Lassie's head on the petrol tank.

Lassie went much farther afield than our first bike; one wet day we travelled from Brighton, where we had been visiting my parents, to Blackpool.
Mum packed salmon sandwiches,and we sat at the roadside munching in the rain.
We had decided to stay in a HOTEL for the night,and I was looking forward to a warm,dry bed.
By the time we got to Blackpool we were thoroughly soaked and bedraggled. I stood just inside the mahogany doors, dripping, and watched George approach the reception desk.
Handsome though he was, he was not impeccably dressed; I could see the expression on the face of the male receptionist.
I could not hear what George said, but I saw the questioning glance over his head to a stout man (bouncer?) in the corner,who responded by slowly,deliberately shaking his head. We were obviously not going to be welcome!
George returned,to tell me that the hotel was full. I did not disillusion him,and we found ourselves a bed & breakfast place. The breakfast sausages were black, but at least we were welcome! 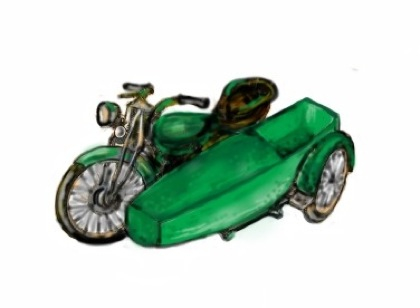 By the time we reached motorbike number three I was pregnant.
George was not happy with me riding pillion, so he bought a sidecar chassis.
We couldn't afford a sidecar, but as always he had a BRIGHT IDEA.
He would make me a wooden box.
The box was, it must be said, a bit like a coffin.
It was painted the traditional Woolworths dark green, and it was well padded.

Although it had a sort of bench, it was more comfortable to lie down in it.
He made a wooden lid which fitted over two-thirds of the box, and once I had climbed in the lid would be tacked down.
We had to take a hammer with us. And a lever!
There are no photographs of this wonderful contraption, but in fact it was quite comfortable, and we continued to visit our favourite places, although Blackpool or Brighton were no longer on the menu.
When we were responsible for a baby,it would be time to buy our first car.
Until then, I travelled, hidden from the public, in my own handmade wooden box.

Once,quite unintentionally, we almost gave a carpark attendant at Southend a heart attack.
It happened like this:
One cold winter evening we decided to go for a bike-ride to Southend.
The lights were on along the front, and we were looking forward to a stroll by the sea and some fish and chips.
When we arrived at the carpark by the Kursaal it was dark, and there were very few cars.
George parked the bike and began to lever off the lid. At a distance the attendant stood, observing him.
He was not aware of my existence.

As the lid was removed, I rose like a ghost from the long green box.
The effect upon the poor man can be imagined!
Luckily he had a strong heart!
< PrevNext >