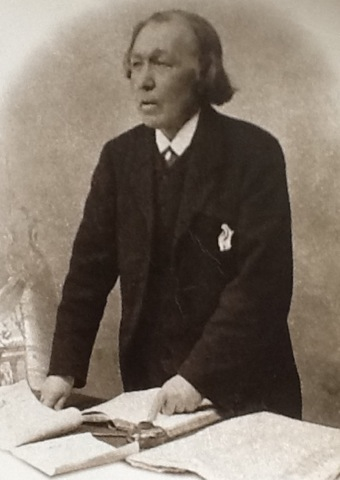 If you have never read the poems of William McGonagall, please do not delay!

He believed himself to be divinely inspired, and in spite of mockery, insult and regular bombardment with rotten fruit, fish and vegetables, and being banned from performing by the authorities, he maintained his self-satisfaction to the end.

It is difficult to sort fact from fiction in the accounts we have of his origins and early life. He maintained that he was born in Scotland, but his parents were Irish immigrants.
His father was a weaver, and he was apprenticed in the craft.
He was married in 1846, and as a skilled worker was not short of work. In the evenings he studied Shakespeare, and committed several plays to memory.

Perhaps the first sign of his eccentricity came when his workmaster was persuaded to pay a substantial amount to a local impresario so that William could, for one night only, take the lead in a professional production of Macbeth.

William took it into his head that the cast were jealous of his talent, and when the time came, at the end, for Macduff to fight and kill him, he refused to die......
Macduff was badly beaten up, and Macbeth was carried out of the theatre in triumph, having completely changed the ending of the play. 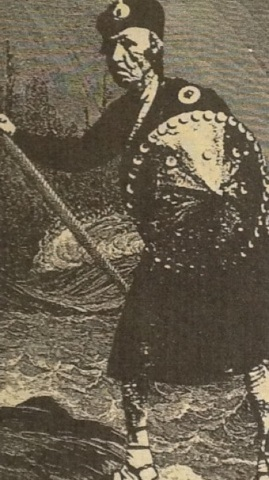 In 1877 William experienced a strange and dramatic Poetic Calling.

He describes how he danced, and walked to and fro, trying to shake off the desire to write,and how a pen was thrust into his right hand, and a voice was crying," Write! Write!"
He even wrote to Queen Victiria, and travelled to visit her,although he was not received.

I will tell more stories about his strange life in later articles, but for now, here is one of his most famous declamatory poems,written when the Tay Bridge collapsed in 1879, with a sad loss of many lives. (William often wrote about the death of the famous, and great events, no doubt because local papers might be persuaded to publish his poems, which were excruciatingly BAD!) 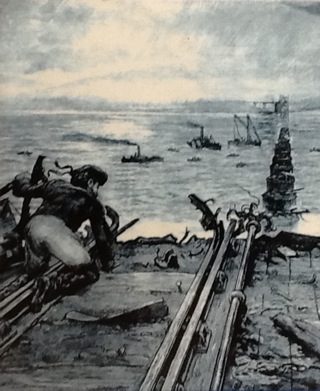 Beautiful Railway Bridge of the Silv'ry Tay!
Alas! I am very sorry to say
That ninety lives have been taken away
On the last Sabbath day of 1879,
Which will be remember'd for a very long time.
'Twas about seven o'clock at night,
And the wind it blew with all its might,
And the rain came pouring down,
And the dark clouds seem'd to frown,
And the Demon of the air seem'd to say -
"I'll blow down the Bridge of Tay."

When the train left Edinburgh
The passengers' hearts were light and felt no sorrow,
But Boreas blew a terrific gale,
Which made their hearts for to quail,
And many of the passengers with fear did say -
"I hope God will send us safe across the Bridge of Tay."
But when the train came near to Wormit Bay,
Boreas he did loud and angry bray,
And shook the central girders of the Bridge of Tay
On the last Sabbath day of 1879,
Which will be remember'd for a very long time.

So the train sped on with all its might,
And Bonny Dundee soon hove in sight,
And the passengers' hearts felt light,
Thinking they would enjoy themselves on the New Year,
With their friends at home they lov'd most dear,
And wish them all a happy New Year.
So the train moved slowly along the Bridge of Tay,
Until it was about midway,
Then the central girders with a crash gave way,
And down went the train and passengers into the Tay!
The Storm Fiend did loudly bray,
Because ninety lives had been taken away,
On the last Sabbath day of 1879,
Which will be remember'd for a very long time.

As soon as the catastrophe came to be known
The alarm from mouth to mouth was blown,
And the cry rang out all o'er the town,
Good Heavens! the Tay Bridge is blown down,
And a passenger train from Edinburgh,
Which filled all the people's hearts with sorrow,
And made them for to turn pale,
Because none of the passengers were sav'd to tell the tale
How the disaster happen'd on the last day of 1879,
Which will be remember'd for a very long time.

It must have been an awful sight,
To witness in the dusky moonlight,
While the Storm Fiend did laugh, and angry did bray,
Along the Railway Bridge of the Silv'ry Tay,
Oh! ill-fated Bridge of the Silv'ry Tay,
I must now conclude my lay
By telling the world fearlessly without the least dismay,
That your central girders would not have given way,
At least many sensible men do say,
Had they been supported on each side with buttresses,
At least many sensible men confesses,
For the stronger we our houses do build,
The less chance we have of being killed. 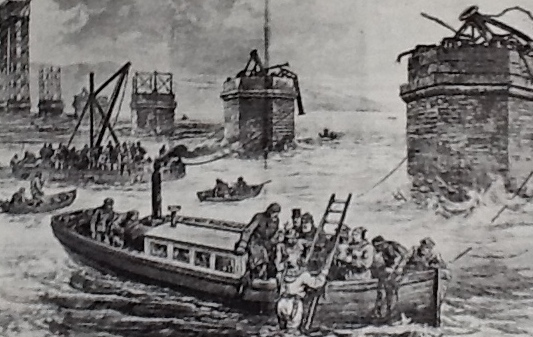 Sometimes I think that William's poetry was so bad that he must have been joking: yet everything in his personal writing seems to confirm that he was serious in his belief that he was a great dramatic poet who was strangely misunderstood by the rest of the world.

What do you think?
< PrevNext >