Many years ago I had a Knitting-machine, and for some time used the fairisle punchcards, which meant I could employ two colours and knit a long scarf in an hour or two.
After a while I was knitting all kinds of things - dressing-gowns,pleated skirts,cardigans and warm jumpers.
But I was not happy with the punchcards provided.
I began to design my own; it was not difficult. Where I punched a hole, one colour would be used: where I did not, the other colour would be used.

The pattern was made thus: the carriage moved over the needles twice for each pattern row.
From right to left,the red stitches would be knitted: from left to right, black stitches would be selected.(Obviously,colours were optional). All I had to do was buy some squared paper and design a repeat pattern.
I would make a two-colour pattern,using the little squares on the paper.
I would colour some squares black and leave some white.
Then I would buy a plain punchcard from the manufacturers.
I had a special punch.
I transferred my design from the paper to the card by punching out a hole where there was a black square,and leaving the card blank where the paper square was white.
I did one row at a time.

Now I could have my own designs!
I could work out people's names,or copy images.
Scarves were very easy.
We had a Bazaar at Church, and I made lots of scarves, some using the official punchcards,and some in my own designs.
I designed a Kit Kat scarf with brown tassels, a Batman scarf, a Blockbusters scarf,a Liquorice allsorts scarf,and one with christmas trees. They sold very well. In the photos you can see some of the patterns I designed. I knew someone who used to sell the Morning Star, and I made him a scarf to wear on cold mornings.
I made myself a green scarf to promote Esperanto(the international language),and my grandson, not to be outdone,made one with polo mints.

I dont use a machine now: knitting by hand is much easier and more relaxing for me.
I shall show you later how you can work out patterns in hand knitting.

But first of all I want to show you the scarf I made for a bet.
I was teaching at Corpus Christi school in Leytonstone at the time.
It was the fashion then to wear very long, narrow scarves with big tassels,and I said I could make one that evening and wear it to school the next day! Nobody believed me..... At the time we had two boxers, both white,called China and Clay.
They were brothers. China was the biggest of the litter, and Clay the smallest.
We had bought both of them while on holiday.( If we had not bought them,they might well have been put down, because the Kennel Club did not recognise white boxers.)

Their names were special. China and Clay, because we bought them in the West Country, in the china clay district.
Clay, after Cassius Clay, another boxer.
China, after the cockney for mate, 'china plate'. Here are photos of them. 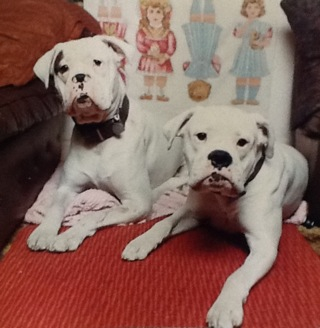 I had already made a punchcard design of our two dogs,and so that evening I knitted a long,long scarf with China and Clay on it.
It took about two hours.
Proudly I wore it to school, and I won my bet!