For a number of years we had a dear little Bluebird caravan.
We put it on a site at Steeple Bay,and spent many happy weeks there; we could take the two dogs,Mary could bring a friend, family would visit, and troubles seemed to disappear.

The site was next to a tidal river,and although the land was flat the salty air which shook the long dry grasses was fresh and invigorating. 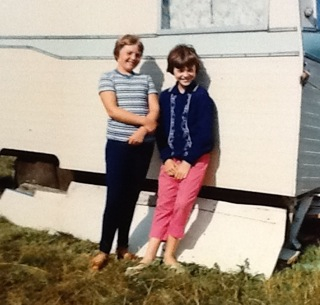 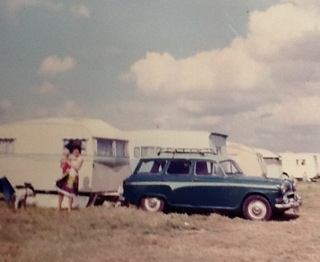 But nothing lasts for ever: the rent rose alarmingly, and choices had to be made.
We decided that the cost outweighed the benefits.
It seemed inevitable that the caravan would be sold.
Yet we were reluctant to lose it; we had enjoyed it so.

There was nowhere to park it in Dagenham; we lived in a small terraced house in a main road,and only had a tiny front garden.
So it would have to be sold. 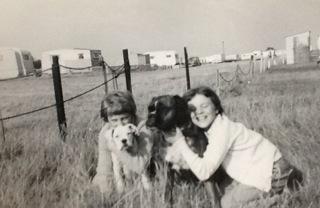 Then George had a GREAT IDEA.

Some would have thought it a stupid,impossible or dangerous idea,but George's ideas were always worth consideration.

He suggested bringing the caravan home,
CUTTING IT IN HALF,
CARRYING THE PIECES THROUGH THE HOUSE,
and MAKING IT COLLAPSIBLE.

Then, if we wanted to go touring, we could pack everything into the bottom half,fold the walls over it,and go!
When we arrived each night at our chosen destination, we would pull up the walls,put a tarpaulin roof(which I would make using my sewing machine,and which would be stretched over a framework of sweeps' canes) over all,and hey presto!

A caravan to cook and sleep in! And no rent to pay! 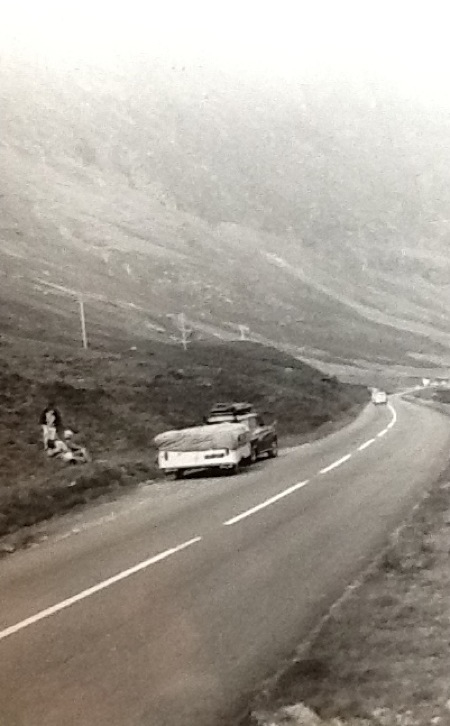 We had great faith in George, and it all worked well.
I stitched away at the tarpaulin roof,using binding strips to slide the canes into,and George hinged the top half of the walls so that they folded neatly over the base.

In the pictures you can see George and my father raising the walls, and the roof sitting neatly on top of all.
We still had glass windows with little curtains, and the caravan didn't look very different from the others. 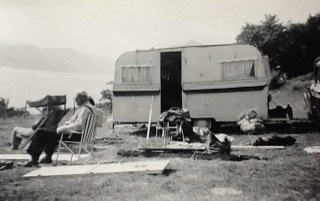 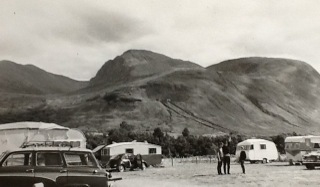 In 1965 we took our collapsible caravan to Scotland.
We were a party of five: my mother & father, George and Mary and me.
Plus,of course the two boxer dogs!
I cooked on a little tin oven,and we ate well,with full cooked breakfasts and evening meals with puddings,(I even managed a pineapple and cherry upside-down pudding!).

My father put on a stone in weight!
We had many adventures,even climbing Ben Nevis(more of those stories later). 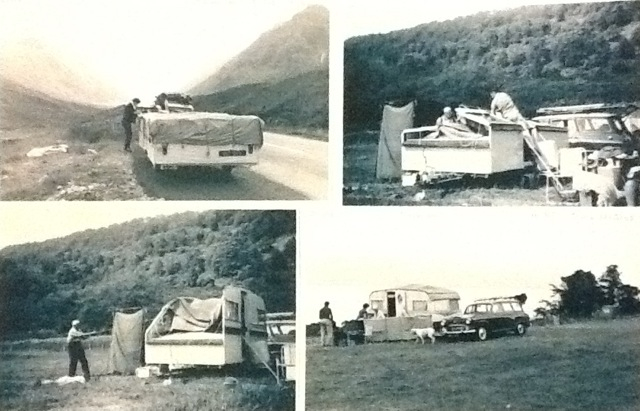 I have included some pictures showing the caravan when flat-packed for the journey, when being erected, and when completely set up at a new site.

If you look carefully, you can see the slightly raised roof,supported by the springy sweeps' canes: I think you will agree that George's idea really worked!
< PrevNext >