During the time when I was teaching at Corpus Christi Junior High School in Leytonstone, we heard about a National Trust holiday site in the West Country, near Falmouth.
It sounded absolutely right for us: we would stay in what had been a coastguard's cottage, the two dogs could come, we would cook for ourselves, and all the beauties of Cornwall would be on the doorstep.

Better still, it really WAS absolutely right for us.
I was so happy there that when we left after our second stay I am ashamed to say I cried; It was as if I knew that we would not go again.
I have only a few photographs, but they may perhaps give you a glimpse of the beauty and peace of the place.

I shall try to describe it for you. 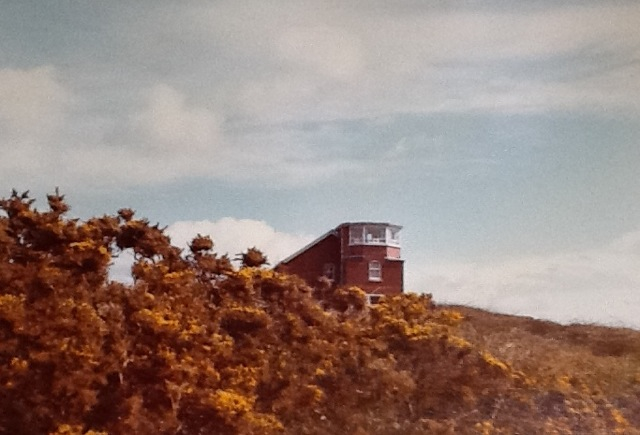 The cottage was on a gorse-covered hill, fronting the sea: beyond the garden wall was the coastal walk which follows the edge of Cornwall and leads to Land's End.
Further down, and not visible from the outlook windows, was a group of cottages which could also be rented, and then a small lighthouse; otherwise, all around was space, sea and sky.
Falmouth was just visible in the far east.
We were, to all intents and purposes, alone; for me,after a life spent between neighbours, the space around me was a gift: I felt free, and time itself seemed to change its pace.

Days there were twice as long; each one was a necklace of peaceful hours. 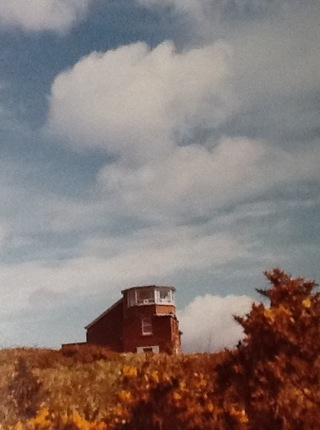 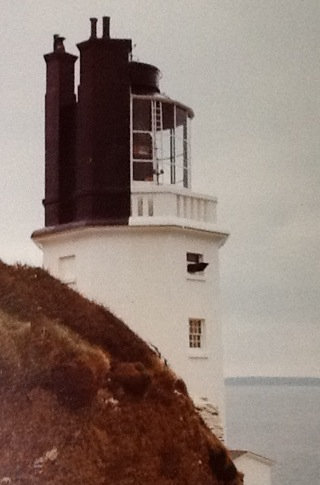 The Lookout was a red-brick three-storey building rather like a lighthouse.
The kitchen and living-space filled the bottom floor:a spiral staircase with a rope handrail led up to the bedroom on the second floor.There were twin beds, which we lashed together under the mattress as we always slept together,and a shower-room.

The staircase continued until we reached the best room of all, the Lookout itself.
This room was equipped with large viewing windows, and the sun poured in from all sides.
There were comfortable chairs on which we could lounge while we read or drank tea or simply looked out at the shining sea.

Ships would go to and fro, clouds would move across our sky, across the water Falmouth would stretch out in the sun.

There was no need to do anything urgently... 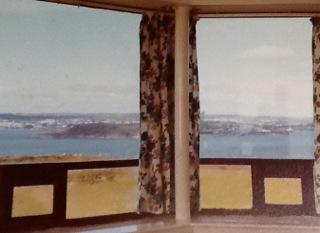 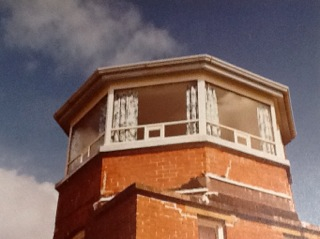 Of course,we did leave the cottage and visit the rest of the world.
There was a tiny village nearby with a long beach and a shop which offered a few souvenirs and basic groceries.
It was here that I bought my first piece of rice-grain porcelain, a blue-and white bowl.
The shop-owner told me that it was made by pressing rice-grains into the wet clay; when the article was fired, the rice disintegrated and left a transparent gap.

I absolutely believed that this was true, and have told many people about it since, but apparently the porcelain is pierced before firing, and the glaze fills the holes and results in the 'windows' which let the light through.
I much prefer my original idea, but can no longer believe in it! 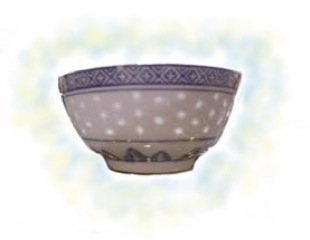 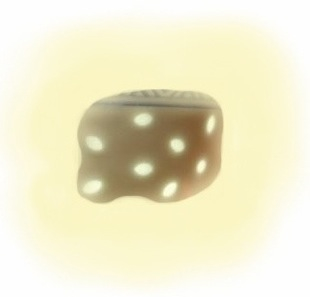 The second, and last time we visited the lookout began with a small disaster.
Everything was packed, the alarm was set, and I was about to go to bed when George (always a cautious and protective husband) thought it best to bring the suitcases into the house overnight,for safety.
They were safe in the bedroom the next morning when we set off for the long drive across London...

This was always the most tedious part of our journey, and it was with great relief that we left the city behind and began to feel free as we reached the first of our country roads.
In the back of my mind was the idea that something was not as it should have been,and as I looked back at the two sleeping dogs I suddenly realised what it was.
They had too much room. We had left all our clothes behind!

We were united in thinking that we would NOT turn back.
We had dogmeat supplies and toiletries, and would have to buy basic clothing in Cornwall.
As it happened, we were able to buy everything we needed in Woolworths in Falmouth(where is that wonderful store now?!?!)

I had red corduroy trousers and gymn-shoes,and George got a flashy T-shirt, and we were perfectly equipped,if a little over-casual! The lovely lady who was in charge of arrangements had as usual set out a brand-new tea-towel and pot-scourer, milk was on the doorstep,and days of peace and pleasure stretched ahead of us. 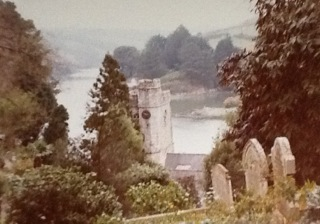 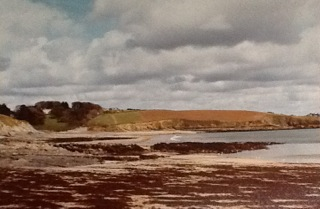 We were always there in April, the first customers of the year,and at the end of that holiday it snowed!
I was looking out over Falmouth and noticed a creamy-yellow tinge in the sky. I could feel and see that snow was coming.
Imagine standing high up over the sea, and watching the weather move across in shades of grey and gold.
I took photos, but they cannot really do such beauty justice.
The snow fell, grey and light,covering the fields,and the whole world was lit from above. 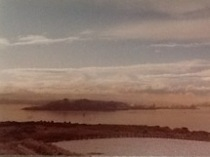 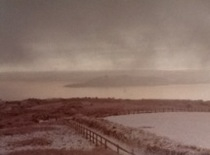 I really did not want to leave that place behind; I suppose I never actually did...
Those holidays were heaven,and all for eighteen pounds a week!
< PrevNext >