Bethlehem in a heatwave

After an excellent breakfast, and much haggling with the taxi-drivers,we set off to Bethlehem.
I had not realised it was so near to Jerusalem - only about five miles.
We met with a kind welcome in this small town (so different from Nazareth); Bethlehem has a distinguished biblical history.

We are told that David spent his childhood here,herding the flocks on the wild hillsides of Judah,and the ancient church jealously preserves within its walls the birthplace of Our Lord.

Hadrian, in an attempt to erase the tradition, profaned the original cave-site of Jesus' birth by erecting his Temple to Adonis over it,much as he did in Jerusalem on the sites of the Crucifixion and Resurrection,with a Temple to Venus & a statue of Jupiter; at the same time he ensured ( quite unintentionally) that the locations were preserved and confirmed for posterity! 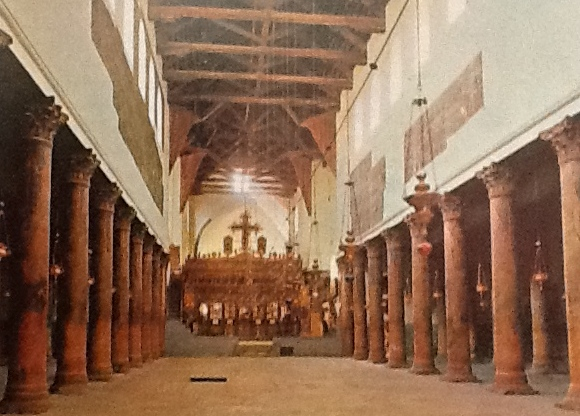 The present Church of the Nativity is a great, barn-like building , with Byzantine pillars of red native stone and huge 'christmas-tree' bauble-like decorative lamps strung from the rafters.
The Greek Orthodox choir-stall is in hand-carved cedarwood from Lebanon.
This site has been the target of looting and burning through the centuries.
In 614, when the Persians invaded the Holy Land and destroyed churches and convents everywhere, they spared this building because it contained a huge wall-mosaic of the Three Wise Men(still in situ), in Persian costume! 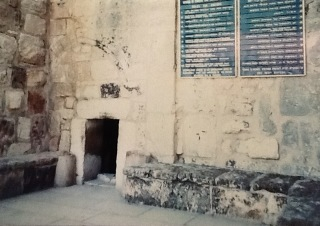 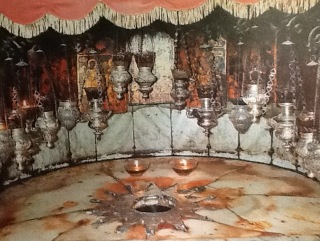 The low entrance, beneath an original high arch more suited to the size of the fortress-like building,is to prevent marauders galloping their horses into the church.
It is the only door remaining; visitors must stoop to enter.
We were to take communion in the marble-lined grotto.
There were the usual territorial problems:two different priests used feather-dusters on the walls,one following after the other like fussy, jealous housewives sharing a small flat!
There was a strong smell of furniture-polish in the grotto, and there were wall-hangings with bobbles & tassels & lace,like a Victorian parlour.
There was even a carpet on the floor: we were told not to stand on it!

For me, the silk pelmets and gold fringes were an intrusion; I would have much preferred simplicity and space. 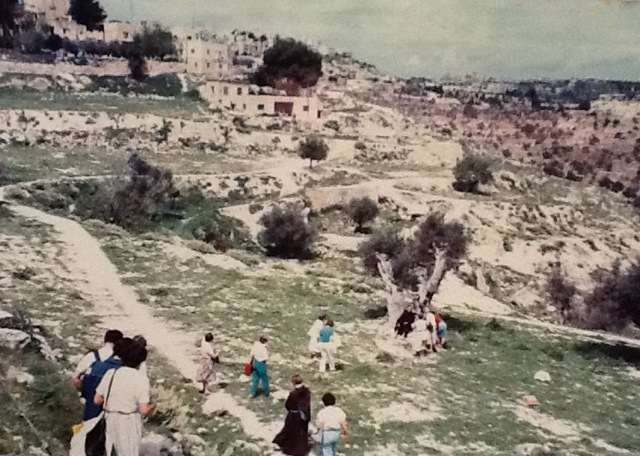 Once out in the heat of the day, we made our way to the nearest shepherds' field we could find!
There was a fair amount of contemporary litter, but Quentin settled himself down under an ancient tree, and waited for his straggling sheep.
We stood in a circle and sang 'Silent Night, Holy Night' in the hot sunshine.
The Christmas Carol Service will never be the same again!

Climbing back up the steep hill, we met a young man pushing a cart with seedy bread-rings on it.
First Barbara, then George gave helping hands as he struggled upward.

There were some heavy explosions, making us all jump(was it war?!?!). 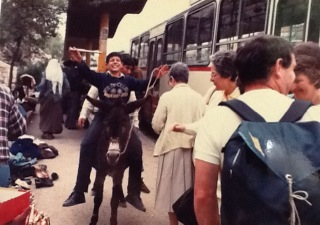 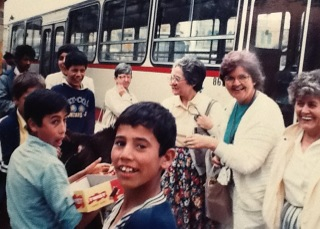 After the expense of the taxis, we decided to try to reach Ein Karem by public transport; this proved to be a lively & amusing expedition.
At a pavement mini-market for second-hand clothes by the bus-stop,we were entertained by a trio of very cheeky boys....
They rode up on a black donkey: one had a box of chocolate biscuit bars (any ten-year-old boy in Jerusalem is an active entrepreneur!)
We held a conversation in impromptu sign-language - I suspected, as the relationship progressed and the lads became more excited & confident of our lack of understanding, that their signs became more rude than ours!
They were very lovable boys, however - full of life, and real show-offs!

The buses were crammed. George stood up to offer his seat to a white-robed,stout Arab lady (much to her surprise, I felt!) - she smiled at me sideways, but held her head-shawl across the lower part of her face,every now and then.
The bus bounced and swayed wildly, and George was several times lifted clean into the air as he hung desperately to the pole! The scenery hurtled past;I closed my eyes, and gave myself up to the experience.......

Finally, after queueing for long minutes in the late sunshine, we climbed into the bus which was to take us to the place I will always remember with love - Ein Karem. 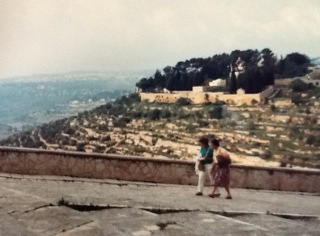 I shall tell the story later.
< PrevNext >