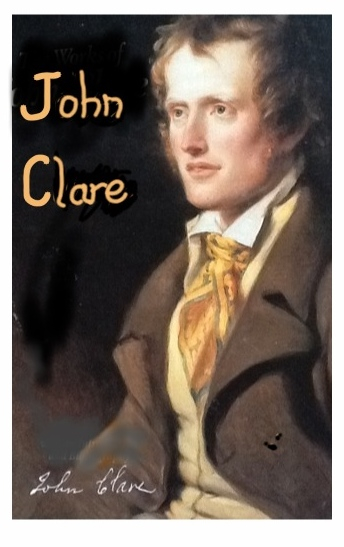 More than two centuries ago, John Clare was writing fresh and honest verse about the world he saw about him. He was born and lies buried in the small village of Helpstone, Northamptonshire. 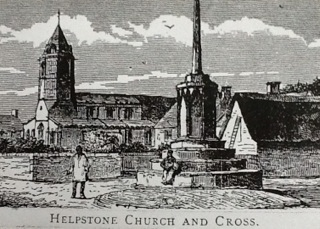 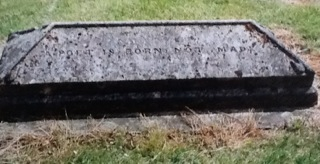 His father was an agricultural labourer, the local community had no time for poetry, and in his teens he wrote in secret, with no idea of his own special talent.
He was a ploughboy, (his formal education ended at eleven), worked in a local inn, and later was a gardener at Burghley House. From an early age he loved ballads and was attracted to books; he wrote on scraps of paper,but considered his efforts worthless.

In the book 'John Clare by Himself,' a collection of his personal writings, we can read of the early difficulties he encountered: (you will notice his lack of punctuation)

'I cannot say what first led me to dabble in Rhyme or at what age I began to write it but my first rude attempts took the form of imitations of my fathers Songs for he knew and sung a great many and I made a many things before I venturd to comit them to writing for I felt ashamed to expose them on paper and after I venturd to write them down my second thoughts blushd over them and I burnt them for a long while but as my feelings grew into song I felt a desire to preserve some and usd to correct them over and over till the last copy had lost all kindred to the first even in the title              I went on some years in this way wearing it in my memory as a secret to all              tho my parents usd to know that my leisure was occupyd in writing yet they had no knowledge of what I coud be doing for they never dreamed of me writing poetry         at length I venturd to divulge the secret a little by reading imatations of some popular song floating among the vulgar at the markets and fairs till they were common to all but these imatations they only laughed at and told me I need never hope to make songs like them           this mortified me often and almost made me desist for I knew that the excelling such doggerel woud be but a poor fame if I coud do nothing better but I hit upon an harmless deception by repeating my poems over a book as tho I was reading it       this had the desird effect       they often praisd them and said if I coud do as good I shoud do so      I hugd myself over this deception and often repeated it and those which they praisd as superior to others I tryd to preserve in a hole in the wall but my mother found out the hurd(hoard?) and uncoscously took them for kettle holders and fire lighters whenever she wanted paper not knowing that they were any thing farther than attempts at learning to write for they were writ upon shop paper of all colors and between the lines of old copy books and any paper I coud get at for I was often wanting tho I saved almost every penny I had given me on sundays or holidays to buy it instead of sweet meats and fruit and I used to feel a little mortified after I discoverd it but I dare not reveal the secret by owning to it and wishing her to desist for I feard if she did she woud have shown them to some one to judge of ther value which woud have put me to shame so I kept the secret dissapointment to myself and wrote on suffering her to destroy them as she pleasd but when I wrote any thing which I imagind better then others I preservd it in my pocket till the paper was chafd thro and destroyd by a different and full as vain preservation.'

In spite of all his private reservations about his own creative ability, John went on to produce a great quantity of written work. He is today considered to be 'a defining voice of the rural poetic tradition.'

His life was not easy; later he spent some years, depressed and often lonely, in a lunatic asylum; but the beauty and simplicity of his verse reflects the pleasure he took in the small details of everyday country life. 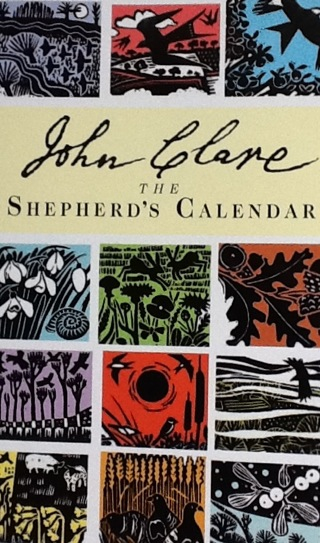 Here is a small example from 'The Shepherd's Calendar' : the beginning of June,1827.

His London publisher, John Taylor, has added punctuation; personally, I prefer it as it was written originally.

Now summer is in flower,and Nature's hum
Is never silent round her bounteous bloom;
Insects, as small as dust,have never done
With glittering dance, and reeling in the sun;
And green wood-fly, and blossom-haunting bee
Are never weary of their melody.
Round field and hedge, flowers in full glory twine,
Large bindweed bells,wild hop, and streakd woodbine,
That lift athirst their slender-throated flowers,
Agape for dew-falls, and for honey-showers;
These oer each bush in sweet disorder run,
And spread their wild hues to the sultry sun.
The mottled spider, at eve's leisure,weaves
His webs of silken lace on twigs and leaves,
Which every morning meet the poet's eye
Like fairies' dew-wet dresses hung to dry.

Nothing around him escaped John Clare; he was part of his surroundings, and celebrated the English countryside in all its variety,using the words of an honest, simple working man.
He is buried in the churchyard at Helpstone. Every year the local children, at a simple ceremony, lay bunches of wild flowers around his grave. 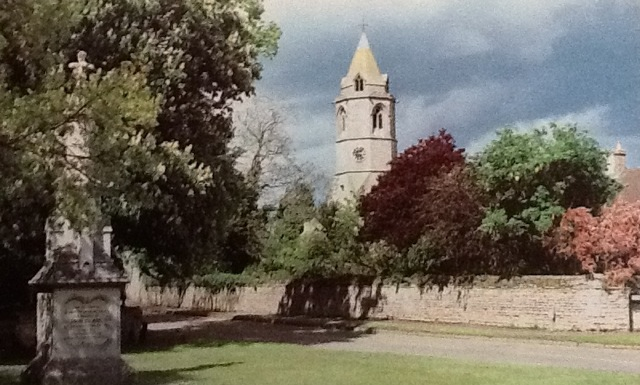 The monument on the green bears his verses. 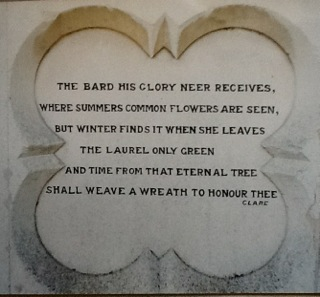 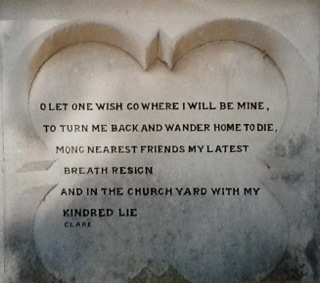 Inside the church there are picture postcards of the house where he was born.
When I visited the village, I felt that his memorial is a fitting one; like himself, plain and not seeking celebrity; like the daisy and the violet, the spider and the honey-bee,simply and usefully in the right place.
For many reasons, John Clare is one of my favourite poets. 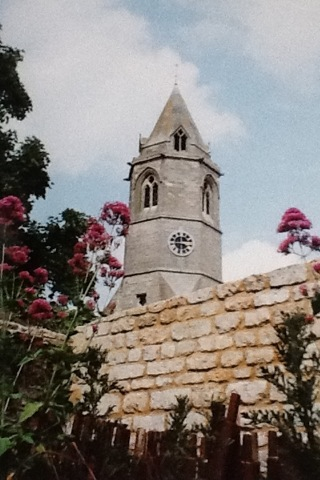 Every now and then I shall put more of his poems here,just as the children lay their flowers,to honour him.
< PrevNext >