Many years ago I had a slipped disc.
From time to time, particularly in cold weather and partly because we had no central heating and a very draughty house, I would wake to a day of real pain.
This could last for over a week,and often I had to sleep on my back on the bedroom floor.

I did not slip a disc very often, but when I did and it was at its worst, I could barely walk, and would shuffle to school (luckily it was not too far) and teach perched on my high chair.
I was not teaching well, simply surviving; luckily I did not have discipline problems, because I would have been a sitting duck(teenagers are good at identifying weakness in those in charge!).

One of my worst episodes ever was when I was teaching in a Girls' Secondary Modern School in Dagenham.
It took me over half an hour to get to school, and I was extremely tired by the end of the week, and just about managing.
This was a happy school, with a small staff, and we got on together very well.
We often went out together after school,and the staffroom was always full of laughter.
They were all very supportive.

Winsome, one of my best friends,at the end of the week, gave me a present to cheer me up.

It was a micraster sea-urchin fossil, from the cretaceous period. 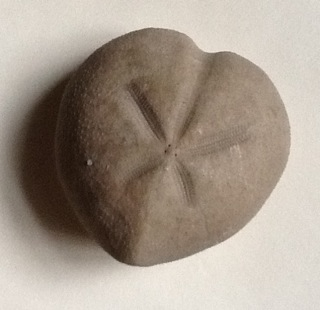 It really did cheer me up!

That night I put it under my pillow so that I could look at it when I woke up!
It is one of the best fossils in my collection,but I always associate it with a painful back...

On another occasion the same friend gave me something very unusual.
It wasnt even my birthday.

It was made in India,and I have never seen another like it.
It is a tiny, bright scarlet bean with an ivory stalk.
Inside the bean were TWELVE miniscule ivory animals, each one carved by hand.
Although they are so minute, it is possible to identify each one.
There is an elephant, a giraffe,a camel and a buffalo.

They are very, very light, and a breath could blow them away.
I decided to make them safe.

I tipped them out of the bean, and searched for a suitable display box. 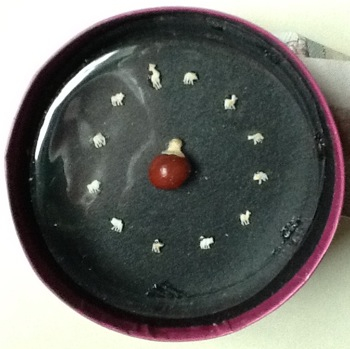 I found a circular box, and managed to mount the animals in a circle, with the bean in the centre.
I used tweezers, and put a tiny drop of glue for each animal, then dropped them into place one by one.
Now I can look at them without holding my breath!

Both these gifts mean a lot to me, because Win died years ago, and they are all I have to remember her by.
We both changed schools, and did not see each other very often, but it made no difference to our friendship.
Every year she went to Cornwall for her holiday, and I would receive a card from her.
Every Christmas we would exchange news.

Then, one summer,she contacted me and suggested we should meet in London for coffee.
It was as if the years between had never been; we laughed, and talked,and then she told me about her cancer.
She did not have long to live.

Her husband contacted me at the end,and I went to the hospital.
Although I did not see her, I was in the hospital when she was dying.
I knew she was not distressed: she had told me not to worry; she said that she was looking forward to some travelling.
I still think of her,and hope her journey is a good one. 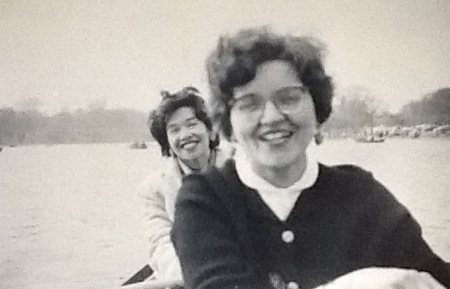 It was good that the family asked me to the funeral; they came to fetch me, and I joined the family for breakfast. I met her beloved rats for the first time.
After the service we all sat together in the garden in the sunshine. 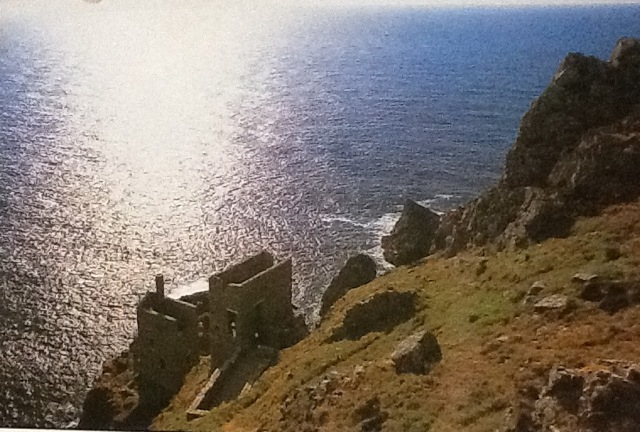 They are still in touch.
When they all went to Cornwall that summer they took Win's ashes to the clifftop and scattered them there.
They sent me a beautiful postcard of the place,with late sunlight shining on the sea.
On the back Ken wrote 'This was one of her favourite spots, with rugged coastline,engine houses and a decent pub up the path from here.'

The postcard has been on my mantelpiece ever since.
< PrevNext >