A Mistaken Point of View

When I was a little girl I was very, very short-sighted.
I could see clearly everything that was up to about twelve inches from my face,but from that point on things were blurred, and occasionally quite puzzling.
Of course, since I had always seen the world like this, & had no way of comparing my view of it with anyone else's, I believed that I saw things as they really were.
I was perfectly content.
I read early, and was happy for hours with my face in a book, or in the garden studying the insects & flowers,or drawing & making my own little world in plasticine.

In fact, none of the adults around me suspected that there was anything amiss.
However, I was often puzzled by the world beyond my field of vision.
There was a picture in my bedroom, above the tiny fireplace, which seemed to me very mysterious.
I would spend long periods of time gazing up at it & wondering what it could possibly mean.

The picture was mostly grey and blue. I could see the head & shoulders of an old lady with her back to me.
She had dark grey hair, and a short curved pigtail hanging down behind her.
Strangest of all, there seemed to be a picture-frame with broken glass sticking out of her head.

For a very long time I tried to make sense of what had happened to the old lady, who looked rather like my own Grandma. 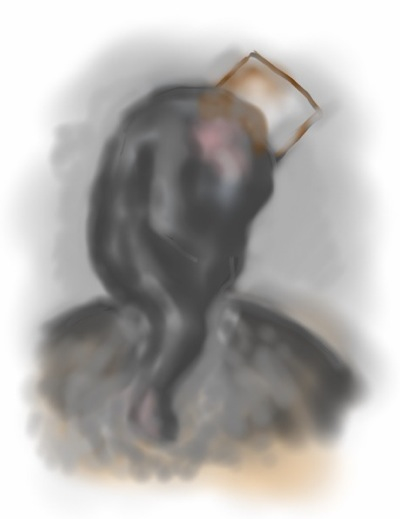 Eventually,after a few years (I suppose I was five or six) I asked my father what the picture was called, and he said "HOPE."
I went upstairs and stood in front of the picture, & at last I thought I understood.
Light dawned. I can remember thinking,"Oh, YES! She is hoping someone will take the broken glass out of her head!"

When I was seven years old, I had my first eye-test.
I was not able to see even the biggest letter on the chart, & I can still remember how angry the nurse was - she actually did not believe me, and said, "Of course you can see more than that!"
I can remember that my mother was cross with me, too,and gave me a little shove from behind as I went into the next room.
I did not know what I had done wrong.
Eventually I was given my ugly round spectacles,and had to endure the name-calling ('FOUR-EYES!') in the playground for a while; but it was well worth it, because immediately a miracle occurred!
I could see a new & even more beautiful world - sparkling,sharp, clear in every detail.
I could read bus-numbers & advertisements & cinema posters; I could see leaves on the trees, patterns on the wallpaper, the cuckoo in the clock on the wall.
Best of all, I could at last clearly see the poor old grandmother, with her pigtail and her injured head.

Up the stairs I went, and with my magic spectacles perched on my nose I stared up at the picture.

With a sense of absolute amazement I saw that the old lady did not exist! 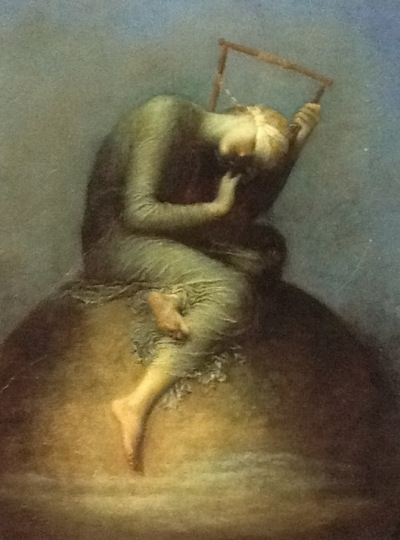 The picture 'HOPE' is actually quite well-known.
You can buy it as a fridge-magnet or postcard in the Tate Britain Gallery.
But it is NOT an old grandmother with broken glass in her head.
It is a young lady, robed in grey and blindfolded, sitting on top of the world, playing a harp with broken strings.
As a young, half-blind child I could not see the beautiful, sad young lady: for me, the world became the curved shoulders of the grandmother.
The body of the young woman was the old lady's head, and her bent legs became the pigtail.
The broken glass in the picture-frame was actually the young lady's harp.

In fact everything I had seen, in my blindness & ignorance, was completely false! 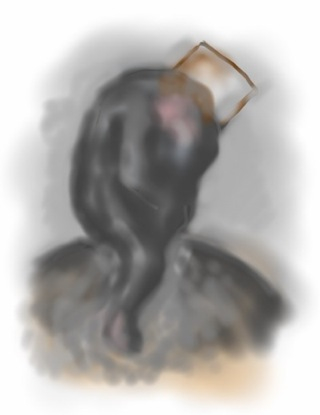 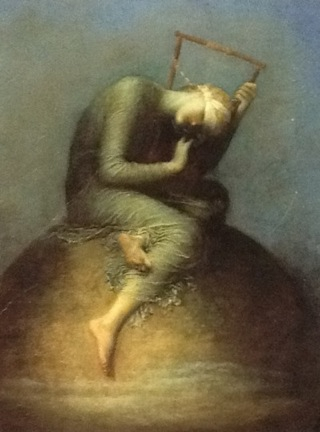 I did learn something very important from this experience: i learnt that even if I was quite certain about something, I could be mistaken.

I have always tried, when arguing about something, to remember that I DO NOT KNOW EVERYTHNG, & that I COULD BE WRONG!
< PrevNext >