The Seven Wonders of the World

There are quite a few lists available, but this is mine.

In some lists all the Egyptian pyramids are included, but I have included only the three great Pyramids of Khufu, Khafri and Menkaure at Giza.

2 THE HANGING GARDENS OF BABYLON

These were actually roof-gardens. The exact site has never been found,but they were watered by pumps connected to the Euphrates.

3 THE STATUE OF ZEUS AT OLYMPIA

This statue must have been a wonderful sight. It was 30 feet high,and was gold-plated,seated on a gold-plated throne decorated with ivory and(possibly) gems. 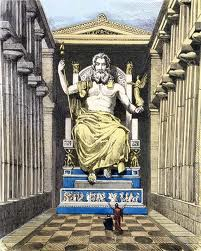 4 THE TEMPLE OF ARTEMIS AT EPHESUS 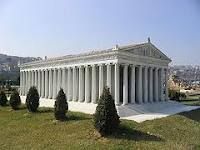 5 THE MAUSOLEUM OF HALICARNASSUS

Mausolus was king of Cana and when he died,c.350 BC,his widow, Artemisia,built this immense tomb. 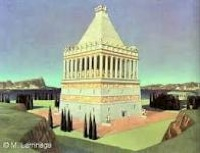 6 THE COLOSSUS OF RHODES

This bronze-covered statue was reinforced internally with iron.
It was 100 feet high, and was built to the sun-god Helios, so that everyone who saw it would remember the raising of the siege of Rhodes in 304 BC.
It cost 300 talents, took 12 years to build and was finished in 280 BC. 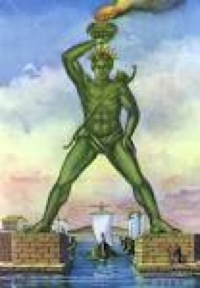 This lighthouse was built on the Island of Pharos just off the coast of Alexandria.
It is not known what the light was - perhaps a bonfire, or maybe oil burners. 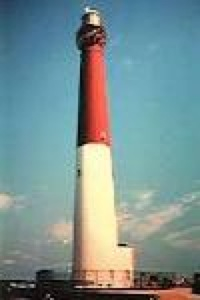