Before breakfast, George and I went out into the gardens of the Holyland Hotel, in an attempt to find the famous model of the old city of Jerusalem, which is in the grounds( and the Guidebooks!)
On our way we met a man with a basket: he was going to work for the day, one of a team of four who spent their time mending and adding detail to the model.
He seemed very glad to talk to us about his job, and promised to give me some of the stones used for the model, if I would go before the site closed in the evening. 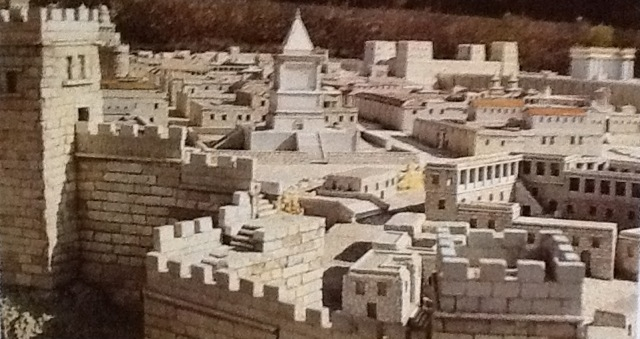 We left at 7.30 for Massada.
It was hot, and as we drove on it got steadily hotter.
The wilderness was wide, wild and desolate.
All kinds of animals live there, but we didnt see one; wild goats, deer, foxes and ( so Baruk said) leopards.

The cable-car-ride up the mount at Massada was exhilerating - we were suspended in space, looking far below and behind us at the deep blue Dead Sea,& up at the golden heights ahead & high above. 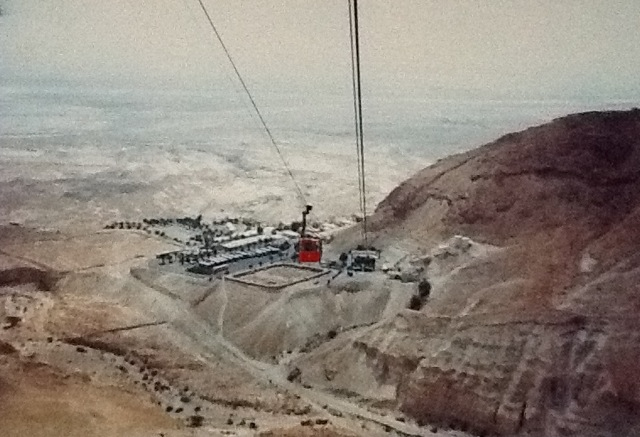 The excavated ruins are extensive and impressive.
Baruk was at his most confident here,and we followed him in an obedient string(tourists, not pilgrims, today.)
We were shown enormous cisterns filled by rainwater, marble-lined walls,a throne-room, a bath-house, and some lovely mosaics. 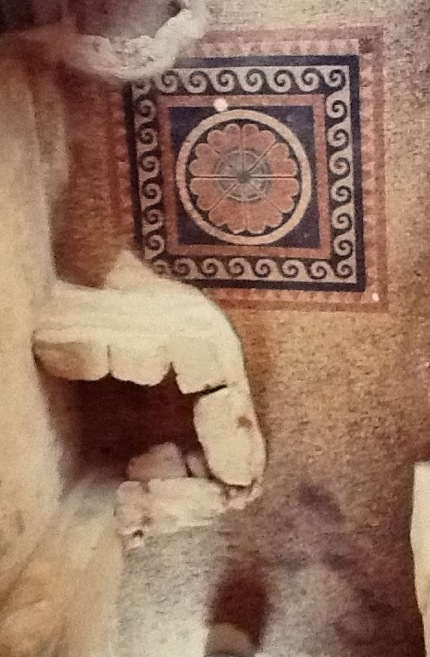 After our Grand Tour, we sat on wooden benches under a wicker shelter, & listened as Quentin read to us the final speech of Eleazar Ben Yair, leader of the Jewish patriots who were under siege and died here,choosing an honourable death rather than slavery under the Romans.

Eleazar knew that the end was near, and the enemy would overrun them the next morning, so he gathered his men round him and delivered one of the most dramatic speeches in history.
" Life is the calamity for men, not death. All men are equally destined to death, and the same fate attends the coward as the brave.
Can we think of submitting to the indignity of slavery?
Can we behold our wives dishonoured and our children enslaved?
While freedom is our own and we are in possession of our swords, let us make a determined use of them to preserve our liberties. Let us die free men, gloriously surrounded by our wives and children.
And let us be expeditious.
Eternal renown shall be ours by snatching the prize from the hands of our enemies & leaving them nothing to triumph over but the bodies of those who dared to be their own executioners."

All around us were visible the remains of the camps, the blockade wall and the massive ramp built by the Roman General Silva during the long siege.
The ramp, built by Jewish prisoners, was the final ( and successful ) attempt to breach the defences.
Bravely the patriots planned the death, first of their families, and then of themselves. 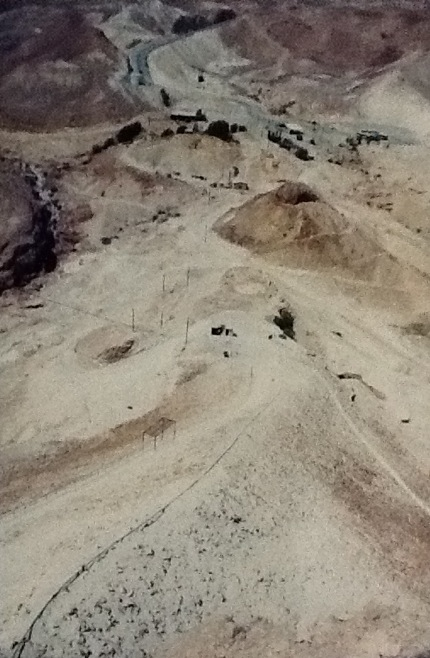 Josephus describes their dramatic and heroic end:
'While they embraced their wives and children for the last time, they wept over & stabbed them in the same moment, taking comfort, however, that the work was not performed by their enemies.....
There was not one man who was wanting in the necessary courage.....
They then cast lots for the selection of ten men out of their number to destroy the rest.
These being chosen, the devoted victims embraced the bodies of their deceased families & then ranging themselves near them, resigned themselves to the hands of their executioners.
When these ten had discharged their disagreeable task, they again cast lots as to which of the ten should kill the other nine.
The nine devoted victims died with the same resolution as their brethren had done.
The surviving man, having surveyed the bodies and found that they were all dead, set fire to the palace & threw himself on his sword among his companions.'

At dawn the next day, the Romans attacking the fortress met with no opposition.
They found the palace burnt down, as well as all the treasure the Jews had collected before their final act, heaped within it; and the bodies of the dead families, clasped together in farewell.
It must have been a harrowing sight: and as Josephus said, 'For the Romans it was a hollow vtctory.'


The Dead Sea was not as romantic as I had expected.
Where were the salt-encrusted trees, the floating saltbergs, the pure white sands we had gazed at in the brochures?
There was dark grey shingle, an army camp ( leaving bundles of khaki equipment under a group of stubby palms) and a concrete shower-house-cum-loo for those who were courageous enough to swim. 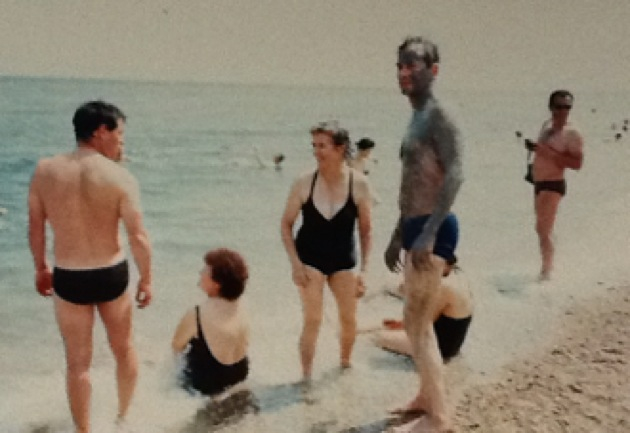 Quentin smeared himself liberally with the grey mineral-rich mud, which is reputed to work wonders on all kinds of skin diseases,and wandered among us like some lost alien. 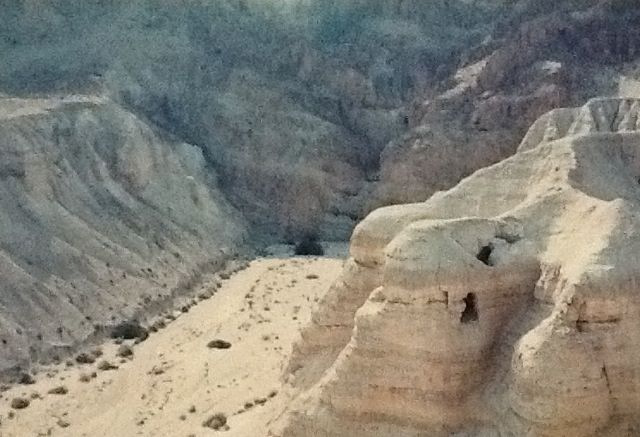 We spent some time at QUMRAN,renowned for the discovery of the Dead Sea Scrolls.
In 1947 an arab shepherd named Mohammed Edib, looking for a lost goat,lobbed a stone into the opening of one of these caves & heard the sound of something breaking.
He ran away!
Next day he came back with his cousin, and they went into the cave.
They found 8 large pottery jars, and looked for gold inside them - but found only bundles of leather, with writing on them.
They were bitterly disappointed.
It was not until 1949 that someone realised that the scrolls were in Hebrew, immensely old and of enormous value; 4 of them fetched $ 250,000!
The most famous of the scrolls is the one of Isaiah, which is one foot wide by 24 ft. long.
The writers of the scrolls were Essenes, members of a religious sect who abandoned Jerusalem for an austere life in the desert.
They were all killed by the Romans, but hurriedly hid their treasure - the Scriptures - in inaccessible caves, when they saw the Legions approaching.
The desert kept their secret for 2,000 years!
Baruk showed us the ruins of their settlement,all carefully excavated - the dining-room, a pottery, a kitchen store, and an assembly hall. 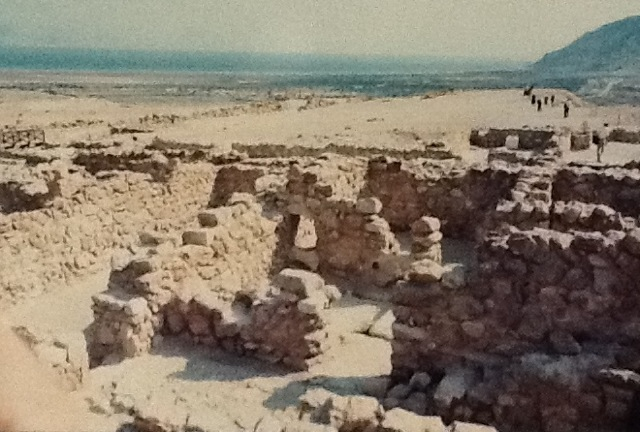 He told us (but Jews tell arab stories, much as we tell Irish jokes!) that before the scrolls were 'recognised', the Bedouins would sell one inch square pieces of parchment at a time,to tourists!
Imagine owning a little square of ancient prophecy, 2,000 years old!
< PrevNext >