Every Picture Tells a Story

This painting was exhibited in the Royal Academy in 1877. It is by Briton Riviere,R.A.
The Graphic critic wrote, "Sympathy is one of the most perfect linkings of human and animal in the bond of common feeling that was ever put on canvas." 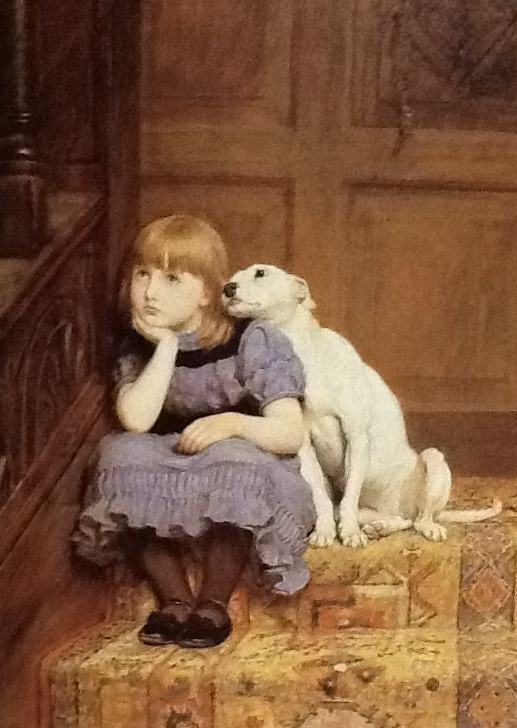 Ruskin himself wrote,"It is long since I have been so pleased in the Royal Academy as I was by 'Sympathy.'
The dog is uncaricatured doggedness, divine as Anubis, or the Dog-star; the child entirely childish and lovely, the carpet might have been laid by Veronese.
A most precious picture in itself, yet not one for a museum.
Everyone would think only of the story; everybody would be wondering what the little girl had done, and how she would be forgiven,and if she wasn't how soon she would stop crying,and give the doggie a kiss, and comfort his heart ."

The Spectator named Riviere as 'the only animal painter in England who has taken the place of Landseer(he had died in 1873). Riviere has surpassed Landseer in his own way, for he has given feeling to his animals, and yet kept them strictly within their own nature.'
The picture is in the Royal Holloway College.

Art Exhibitions today are guaranteed to make the visitor think; the Victorians were unafraid of sentiment and welcomed realistic detail.
Most of all, they enjoyed narrative painting.
Art upheld the status quo,and was always in a frame.

What would Ruskin make of a pile of bricks or a pickled cow?
But was this actually a masterpiece?

I have a confession to make. I gave George a china plate with this picture on it,and he loved it.
It was a Valentine's day present.
The dog was SO like our own white boxer, Clay, and the expression on his face was so true to life.
I didn't think it was the best picture ever, but if you had a little dog looking at you like that, wouldn't you love it too? 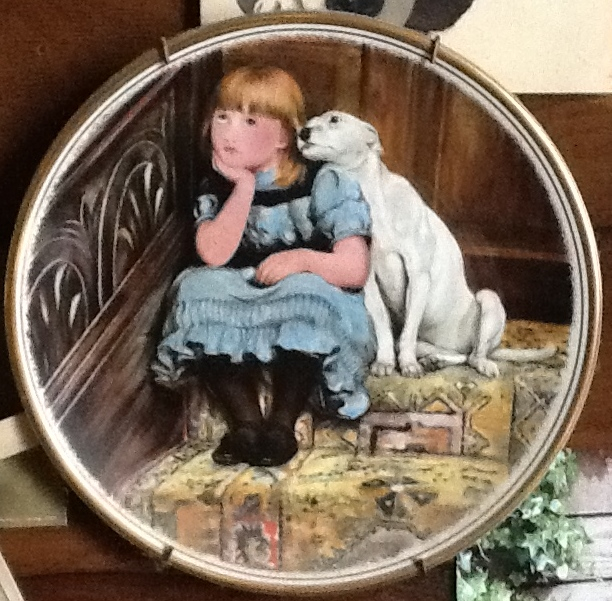 I think the victorian critics were possibly too generous to the painter, but he certainly understood dogs!
And I enjoy narrative paintings.
Perhaps I am not ready for pickled cows?

But perhaps there is something to learn from them?
< PrevNext >