Titanic - how it really was

I have a small,unprepossessing golden yellow book, printed in 1931, which, in spite of its poor condition (somebody once spilt something on the front cover) has brought me a great deal of pleasure, and taught me a great deal.
Its title, in art deco letters impressed in a soft purple-grey at the top of the cover, is THE SCENE OF ACTION , and centrally, in smaller letters, is printed EYEWITNESS ACCOUNTS.
The book is a treasurehouse of information about our historical past, and every word was written by someone who saw what really happened ( I would possibly except Stow, because he was aware of posterity when he wrote and sometimes wrote later, from notes).

It is the only dirty book I have ever kept,and I value it because it tells me the truth.

Most history-books give us a slightly biassed version of the truth,and this book is a refreshing read.
The Editor writes :
This little book is a record of Things Seen.
The writers have used their powers of observation,and not their powers of imagination.
Many of the writers are quite unknown, and the standard of writing is remarkable, particularly in the account from which the following excerpt is taken. 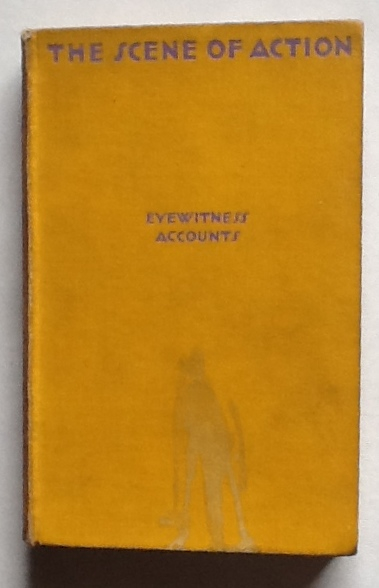 In April,1812, a hundred years ago,the S.S. Titanic, the largest ship in the world, and theoretically quite unsinkable,on her maiden voyage, struck an iceberg in mid-Atlantic and sank in two-and-a-half hours.
Although the sea was absolutely calm,out of a title of 2,224,a total of 1,513 (817 passengers and 696 crew) were drowned. 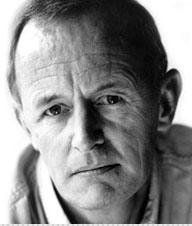 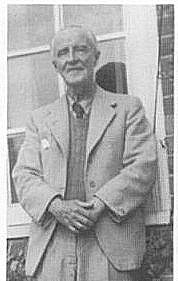 
The following description was written by a Mr. Lawrence Beesley, shown above,one of the survivors.I have chosen a passage from the end of his account, where he describes in striking words the final sinking of that amazing ship.

The written testimony of this passenger is extraordinary.
He was a 34-year-old science teacher, a Cambridge University Graduate.
The Guardian wrote of him,'The best first-hand account of a passenger's experiences....remarkable for its vividness and completeness' and I cannot help but agree.
Here is an excerpt of his report:

As the oarsmen pulled slowly away we all turned and took a long look at the mighty vessel towering high above our midget bost, and I know it must have been the most extraordinary sight I shall ever be called upon to witness; I realise now how totally inadequate language is to convey to some other person who was not there any real impression of what we saw.
First of all, the climatic conditions were extraordinary.

The night was one of the most beautiful I have ever seen: the sky without a single cloud to mar the perfect brilliance of the stars,clustered so thickly together that in places there seemed almost more dazzling points of light set in the black sky than background of sky itself; and each star seemed,in the keen atmosphere,free from any haze,to have increased its brilliance tenfold and to twinkle and glitter with a staccato flash that made the sky seem nothing but a setting made for them in which to display their wonder.
The stars seemed really to be alive and to talk.
The complete abesnce of haze produced a phenomenon I had never seen before: where the sky met the sea the line was as clear and definite as the edge of a knife, so that the water and the air never merged gradually into each other and blended to a softened rounded horizon, but each element was so exclusively separate that where a star came low down in the sky near the clear-cut edge of the waterline, it still lost none of its brilliance.
As the earth revolved and the water edge came up and covered partially the star, as it were, it simply cut the star in two, the upper half continuing to sparkle as long as it was not entirely hidden,and throwing a long beam of light along the sea to us.

And next the cold air!
Here again was something quite new to us: there was not a breath of wind to blow keenly round us as we stood in the boat, and because of its continued persistence to make us feel cold; it was just a keen, bitter, icy, motionless cold that came from nowhere and yet was there all the time; the stillness of it - if one can imagine 'cold' being motionless and still - was what seemed new and strange.
And these - the sky and the air - were overhead; and below was the sea.

Here again something uncommon: the surface was like a lake of oil,heaving gently up and down with a quiet motion that rocked our boat dreamily to and fro.
We did not need to keep her head to the swell: often I watched her lying broadside on to the tide, and with a boat loaded as we were,this would have been impossible with anything like a swell.
The sea slipped away smoothly under the boat, and I think we never heard it lapping on the sides, so oily in appearance was the water.
So when one of the stokers said he had been to sea for 26 years and never yet seen such a calm night, we accepted it as true without comment.
Just as expressive was the remark of another - 'It reminds me of a bloomin' picnic!'
It was quite true; it did: a picnic on a lake, or a quiet inland river like the Cam, or a backwater on the Thames.
And so in these conditions of sky and air and sea, we gazed broadside on the Titanic from a short distance.
She was absolutely still - indeed from the first it seemed as if the blow from the iceberg had taken all the courage out of her and she had just come quietly to rest and was settling down without an effort to save herself, without a murmur of protest against such a foul blow.
For the sea could not rock her: the wind was not there to howl noisily round the decks, and make the ropes hum; from the first what must have impressed all as they watched was the sense of stillness about her and the slow, insensible way she sank lower and lower in the sea, like a stricken animal.
The water had crept up to her sidelight and the captain's bridge, and it seemed a question only of minutes before she sank.
The oarsmen lay on their oars, and all in the lifeboat were motionless as we watched her in absolute silence - save some who would not look, but buried their heads on each other's shoulders.

And then, as we gazed awestruck, she tilted slowly up, revolving apparently about a centre of gravity just astern of amidships, until she attained a vertically upright position; and there she remained - motionless!
As she swung up,her lights, which had shone without a flicker all night, went out suddenly, came on again for a single flash, then went out altogether.

And as they did so, there came a noise which many people, wrongly I think, have described as an explosion; it has always seemed to me that it was nothing but the engines and machinery coming loose from their bolts and bearings, and falling through the compartments, smashing everything in their way.
It was partly a roar, partly a groan, partly a rattle, and partly a smash, and it was not a sudden roar as an explosion would be: it went on successively for some seconds, possibly fifteen to twenty, as the heavy machinery dropped down to the bottom (now the bows) of the ship: I suppose it fell through the end and sank first, before the ship.

But it was a noise no one had heard before, and no one wishes to hear again: it was stupefying, stupendous, as it came to us along the water.
It was as if all the heavy things one could think of had been thrown downstairs from the top of a house, smashing each other and the stairs and everything in the way.... 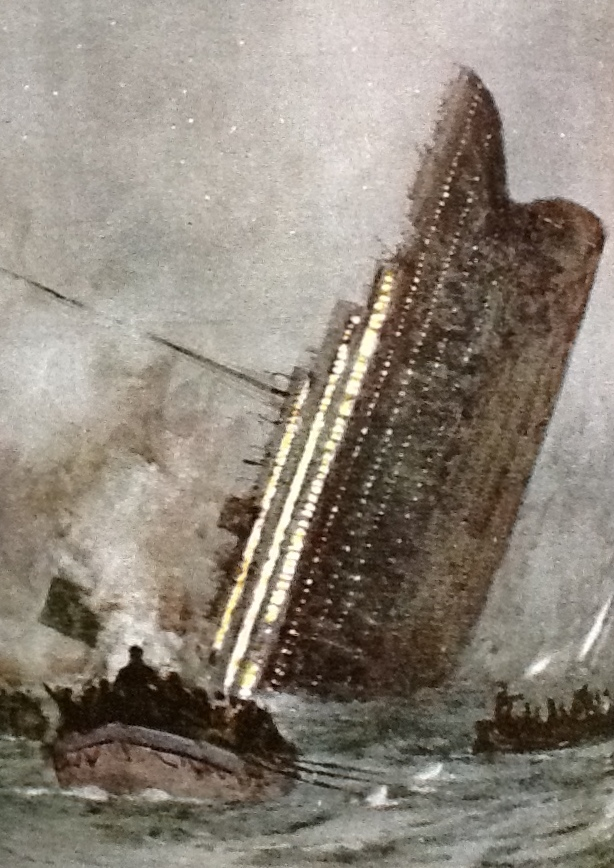 When the noise was over the Titanic was still upright like a column: we could see her now only as the stern, and some 150 feet of her stood outlined against the star-specked sky, looming black in the darkness, and in this position she continued for some minutes - I think as much as five minutes, but it may have been less.
Then, first sinking back a little at the stern, I thought, she slid slowly forwards through the water and dived slantingly down; the sea closed over her, and we had seen the last of the beautiful ship on which we had embarked four days before at Southampton. And in place of the ship on which all our interest had been concentrated for so long and towards which we looked most of the time because it was still the only object on the sea which was a fixed point to us - in place of the Titanic, we had the level sea now stretching in an unbroken expanse to the horizon: heaving gently just as before,with no indication on the surface that the waves had just closed over the most wonderful vessel ever built by man's hand; the stars looked down just the same and the air was just as bitterly cold.
There seemed a great sense of loneliness when we were left on the sea in a small boat without the Titanic: we waited head-on for the wave which we thought might come - the wave we had heard so much of from the crew and which they said had been known to travel for miles - and it never came.

But although the Titanic left us no such legacy of a wave as she went to the bottom, she left us something we would willingly forget for ever, something which it is well not to let the imagination dwell on - the cries of many hundreds of our fellow-passengers struggling in the ice-cold water.
< PrevNext >