Animals in my Life

From a very early age I longed for a pet of my own, but it was not possible.
Once I was married all this changed;we had a cat, and then a dog, and later rabbits, a hedgehog, a tortoise,and a bantam hen with chick. My next-door neighbour was heard to say,"It's more like a bl***y zoo!"
Later we had two dogs at a time, and more than one cat; when Eartha had pups, there were seven of them too!
I am planning to write about Royal pets, and the interesting evidence of telepathic connections between animals and their owners; but first I should like to share some of the stories about our many animal friends.

There is great comfort and affection to be gained from a relationship with a family pet.
Many people say that animals, having no souls, will never get to heaven.
I like to remember that the great protestant reformer, Martin Luther, once wrote:
'Be comforted, little dog, thou too in the Resurrection, shall have a little golden tail.'

EARTHA: OUR FIRST DOG
Our very first dog was a gentle, affectionate boxer.
She was useless as a guard dog,seldom barked, and joined in all our activities.
As a puppy she was less destructive than most,and I had to pose her for this picture! 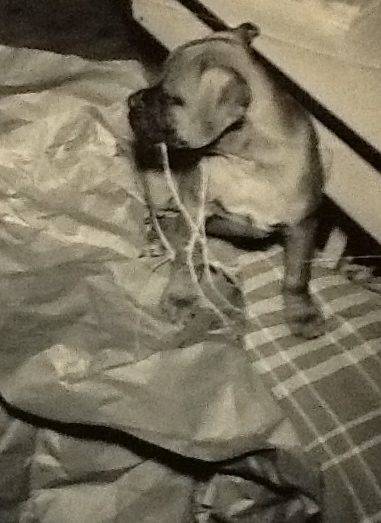 When Mary played schools Eartha was expected to answer the register; I once caught Mary sharing an ice-cream cone with her,'a lick for you and one for me.'
As she grew she became a handsome,good-tempered,loving friend. 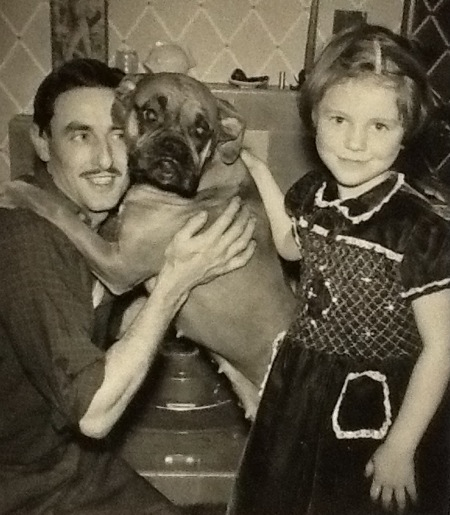 When we were on a camping holiday on the Gower Coast, Eartha (who was tethered because she was on heat) escaped and disappeared over the distant hills.
We called and called, searched and searched, but she had vanished.
For such an obedient, well-behaved dog this seemed extraordinary ( remember, we had never owned a dog before!).
We packed the tent and were almost ready to give up when,as we called for the last time,a line of four dogs appeared in the far distance,all running one after the other.
Eartha was in front, and after her were racing three very different dogs - a little grey scruffy terrier, a mongrel and a large black labrador. They were at least half a mile away.
When they came within distance, George aimed an empty petrol-can at the three miscreants, and Eartha, panting like a steam-train,was able to reach safety in the van.
She was heaving for breath, and for the first few miles of our journey lay on her side struggling to recover.
We were so glad to have her back!

For the next month we watched Eartha carefully for signs that she was pregnant.
Sure enough,she was! In fact, she grew quite plump.
After six weeks, when she lay comfortably on the rug in the evening, it was possible to see the puppies moving; every now and then bumps would rise and fall.
We prepared the space under the stairs as a delivery room, and George even fixed up a heater so that the new arrivals would not be cold. 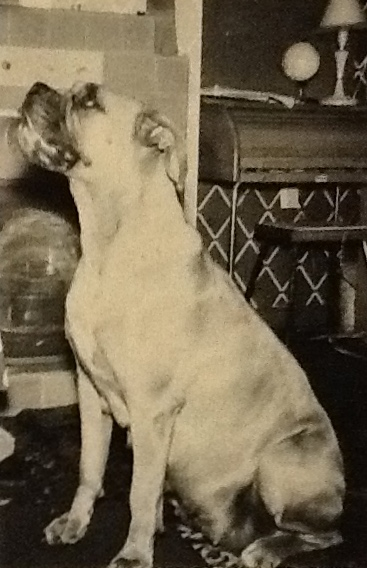 One day, after Mary had come home from school and was having dinner, Eartha became restless and we settled her in her birthing-room.
Within half an hour two puppies had arrived, but it was by then bedtime for Mary. I promised to keep her informed,and sure enough puppies continued to arrive.
I would stand at the bottom of the stairs and call up the numbers: 'three!' 'four!' 'five'.....
By the time I got to six Mary was asleep ; and in the morning there were seven beautiful puppies,all feeding well.
Eartha was an excellent mother, and all the puppies thrived. Thank goodness, it was obvious that the black labrador was the father:they were strong and handsome,and all shades from deer red to black.
We named them,and they all got good homes. Arfer(arf a boxer,arf a labrador)went to live on a farm,Coco went to a family,the vet took one...We loved having them,and it was a great experience,even if unintended! 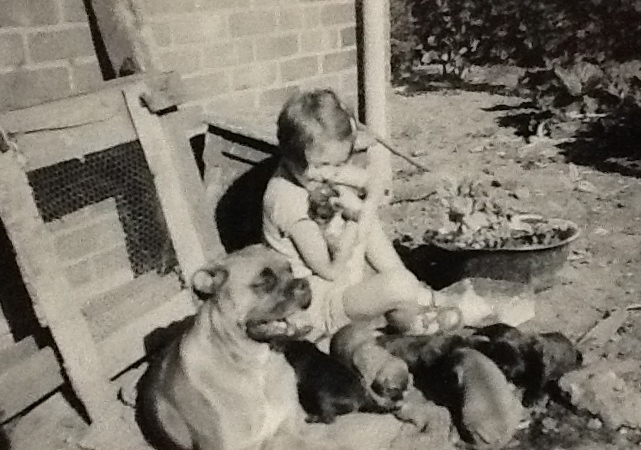 Very sadly, Eartha did not live long: she developed Hodgkins disease,and died at two and a half years.

I quote what Galsworthy wrote about his spaniel Chris, with slight adaptation because she was a lady:

'No stone stands over where she lies. It is on our hearts that her life is engraved.' 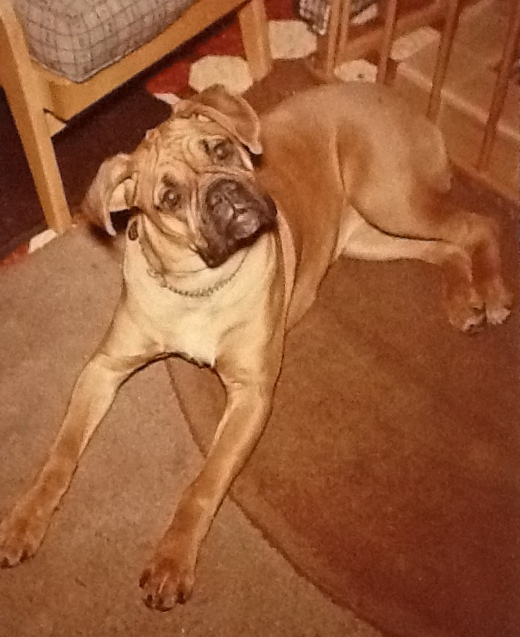