A Language for Everyman

When I was little girl I was occasionally allowed to complete a special wooden jigsaw puzzle.
It showed a large oval table,with men and women of all nationalities seated around it.
They were in traditional national costumes, and were laughing and talking happily together.
Around the edge of the picture were flags of every kind.
The puzzle belonged to my father, who was an Esperantist and had friends all over the world with whom he could easily communicate.
On the wall outside our front door there was a green shelf for the milk bottles.
Next to the shelf Dad had fixed a slate, with an attached slate pencil on a string,on which Mum could write how many bottles she needed that day.
Next to the slate was an enamelled plaque which carried the message ESPERANTO PAROLATA(Esperanto Spoken).
This was in case an esperanto-speaking person might pass by our house and come in for tea and conversation. 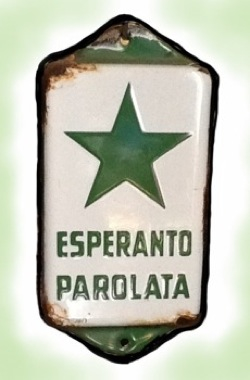 I very much regret the fact that as a schoolchild I showed no interest in Esperanto.
I think my father would have been glad of some family interest and support.
Perhaps I could be excused in part because I was already learning both French & Latin at school, but I am truly sorry now.
After my father's death in 1983 I chose to keep his dictionary, grammar books and the ESPERANTO PAROLATA sign,and within three months had followed a course & could speak the 'internacia lingvo.'
Through one of the esperanto magazines I obtained 15 'plumamikojn' (penfriends) in several different countries, and wrote to them regularly for over eight years.
I had friends all over the world, in Romania, Finland,Bulgaria,Estonia,Japan,Austria,Poland,Slovakia,Iceland,and France, and actually met some of them in England.
Here are photos of a few of them. 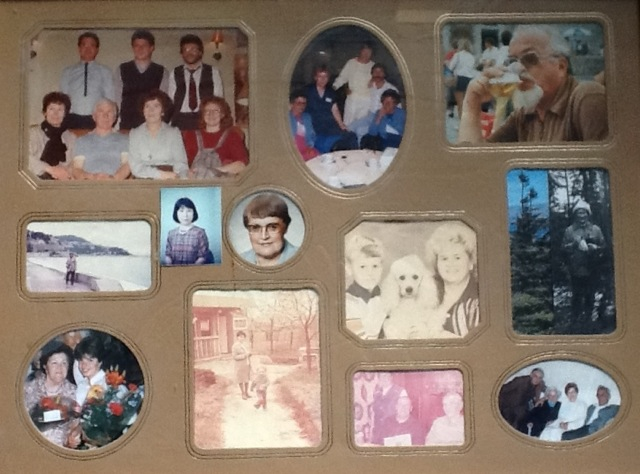 It goes wthout saying that I had no knowledge of the languages of any of the countries involved, with the exception of French; yet, after only three months of learning Esperanto, I was able to communicate easily with all my new friends ,and they with me. Because Esperanto is a manmade language, it has no exceptions, and inanimate objects have no gender, so it is very easily learnt. It took me less than three months.
I think it is a wonderful creation,and if only it were taught in primary schools could make communication across national boundaries so much easier.

I know my father truly believed that Esperanto could promote world peace. 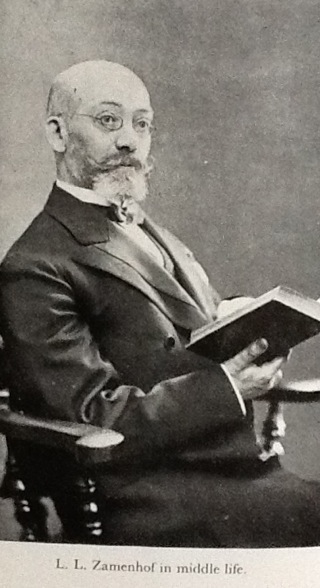 LUDOVIC ZAMENHOF - creator of Esperanto: how it began

As a teenager, Ludovic lived with his parents in1873 in the Jewish quarter of Warsaw.
At the time there were many interracial problems: the Russians forbade Polish and Lithuanian,neither Poles nor Lithuanians liked to hear German or Yiddish, and from his history books he learnt of wars between French,English and Germans, Spanish and Dutch. Ludovic had the idea of a common language for world peace:at first he thought of using Latin,Greek or Hebrew, but then he tried to invent his own language, and spent much of his time in constructing it.

Although he was so young, he made good progress,but spent a great deal of study time on his project.
However, the time arrived for him to attend University,and his father told him that if he was to achieve the best possible grades he had to temporarily leave his preoccupation with the new language.
Ludovic agreed, packed up his language work and gave it to his father in a parcel to look after until he had his degree.
He was a good student, and studied hard.
In his first examinations he obtained top grades in every subject: Zoology, Mineralogy, Botany,Anatomy,Inorganic Chemistry, German and Physics.

Political disputes,however,were making study difficult: he applied for a transfer to Warsaw University, and it was granted.
When he arrived home, he asked for permission to work on his new language during the vacation.
Imagine his despair when he found that his father had BURNED ALL HIS LANGUAGE WORK!

He spoke to his father; it is not known what exactly transpired, but from then on his father lost authority over him.
He set himself the task of recreating his language from memory, and eventually succeeded in creating a complete and unique tool for universal communication.
I am sad that Zamenhof's lifelong work has not achieved its goal.
Although Esperanto flourished for many years, and still has considerable support in some parts of the world, it is sidelined by powerful countries who would prefer their own language to be used by foreigners.
Here are pictures of the badge and booklet used by my father in 1938 when he attended the World Esperanto Congress in London. 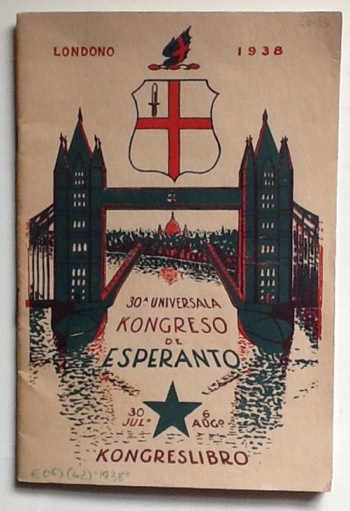 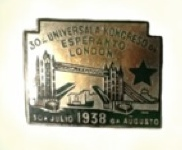 My father made friends, through Esperanto,after World War One, with a badly injured German soldier.
They wrote to each other regularly for 25 years, but George steadily deteriorated.
He went from sticks to wheelchair to stretcher bed.
The last letter he wrote was by using a mirror over his head; he was saying goodbye to an old friend, because he knew he would not last long.
George and my Dad were on opposite sides during the war,but although they never met they became close friends because of Esperanto.
Even as a growing boy Zamenhof wanted the warring factions in Warsaw to understand each other: I think he would have smiled on Dad and George. 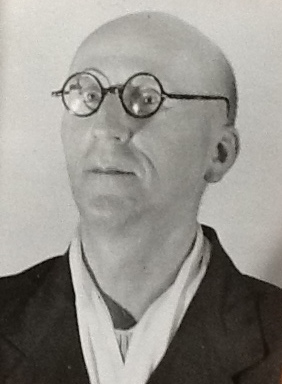 After my father's death, I chose for myself some of his Esperanto memorabilia.
This small wooden box contains all the records he kept of his correspondence; each friend has a small card (or sometimes several cards) with details of every card or letter received & sent.
There are photos & newspaper cuttings too. 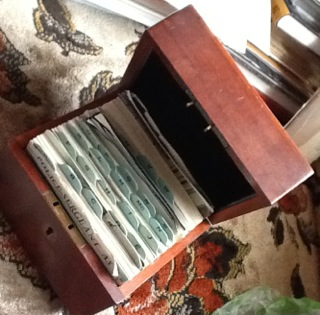 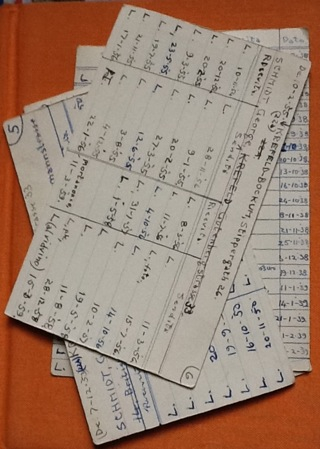 In the box are the photos of George which show how he lost the power to walk, and the last letter he wrote. 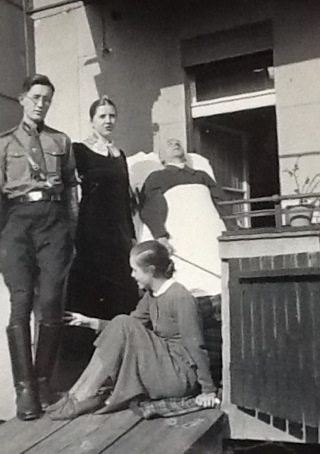 Here is a photo of George's last letter to my Father. 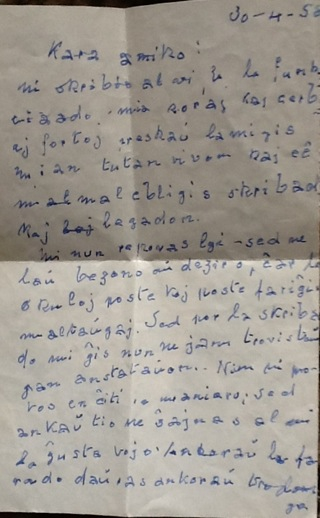 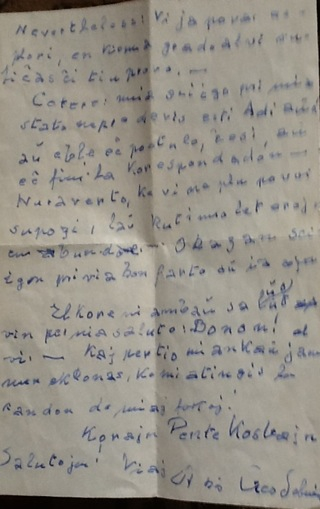 The writing is weak and wobbly,but the message is one of farewell and affection. At the end are Easter greetings: Korajn Pentekostajn Salutojn! Also in the box is the funeral announcement,black-edged. When he received it, my father left us abruptly,went into the next room and closed the door. 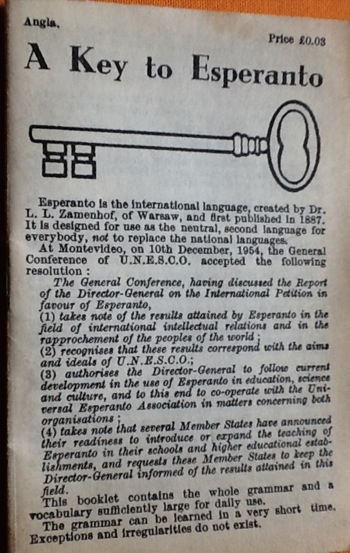 The little booklet cost my Dad 3 pence in a second-hand shop, and it contains all the necessary rules of this amazing language. My father taught himself from this Key to Esperanto, and for the rest of his life was able to find friends from countries all over the world without ever knowing their languages.
< PrevNext >