One of my favourite victorian books is called,' Fancy Dresses Described.'

It has many coloured plates which show how very seriously the new Victorian Middle-classes took their position on the social ladder.
Obviously, much time and money was expended in order to make an impressive entry at a Fancy-dress Ball.
I have selected a few of my favourite illustrations from the book, and added the instructions ( just in case you are tempted to make up the design!) 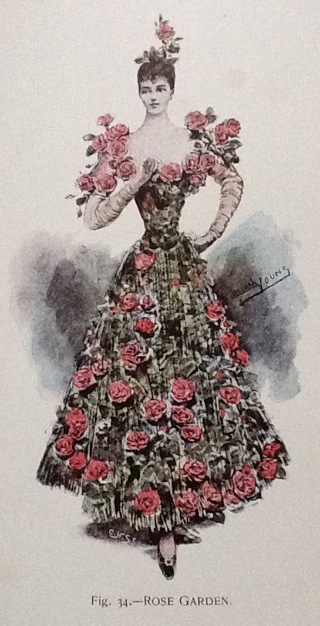 First,a walking rose tree(try dancing in this!)
You will need a light green satin gown, covered with green tulle and ribbons over which roses are trailed.
A green ribbon outlines the waist, and roses border the shoulders, forming a sleeve on one side and a couple of bands on the other.
Long ruffled gloves, an erect spray of roses,and green satin shoes are worn with it. 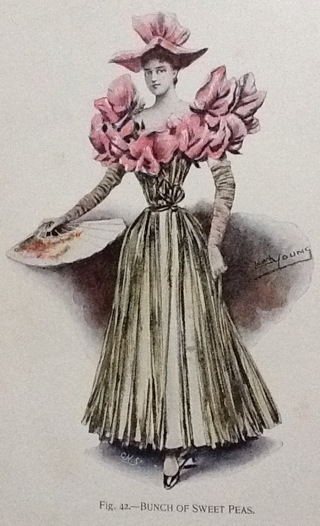 How about going as a bunch of sweet peas?
The skirt is made of white satin,and so is the bodice, both entirely covered in sweet-pea stalks,tied in a bunch at the side, to form the girdle.
The flowers border the top of the bodice and constitute the sleeves, and a pretty satin hat is fashioned after the form of the flower(??? How ???)

Long gloves are ruffled on the arm, sweet peas figure on the fan, and black shoes and white silk stockings complete the picture. 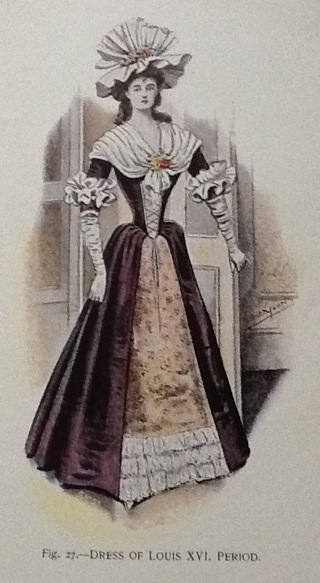 There are historical and folk-style costumes too -- here are just a few:

A dress of the Louis XVI period and Springtime in Japan

And, finally, A Spanish Costume and a Scotch Fishwife. 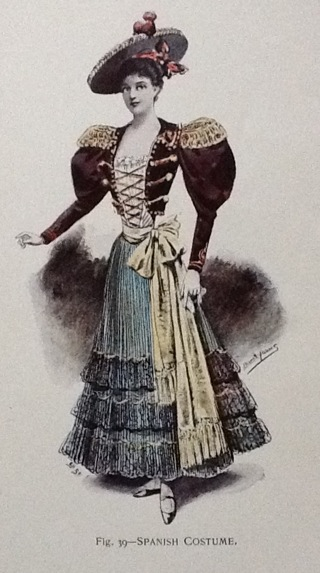 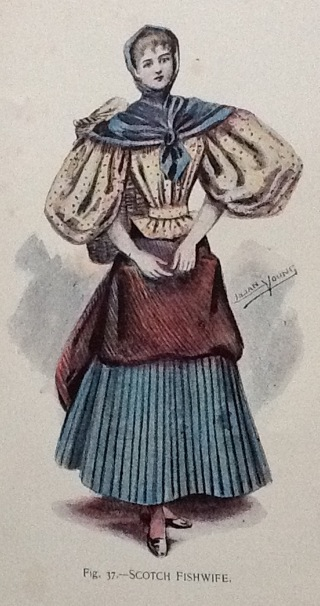 The book is full of these complicated costumes, each with a far from practical set of instructions.

Perhaps today we take these things less seriously?
I have to admit that I love dressing up.

I dont mean for grand occasions (Ive never been to one) but for fancy dress parties.
When I was at College I went to a fancy-dress ball at Chelsea and wore a genuine 1870s crinoline, borrowed from the College Drama Department.
I had lace mittens , a bonnet and shawl, and had to travel by tube.
I walked from West Hill, trying to behave normally but having to endure stares and comments on the way.
When I got to East Putney Station, I took my money out of my little dolly-bag, and pushed it under the glass.
The man in the cubicle wasnt looking, he was bored; but when he saw a mittened hand before him he looked up, and did a double take at the sight of me in my Victorian gear.

I spoke in as genteel a voice as I could muster; "A return to South Kensington, please."
His mouth was still open as he gave me my change.
I believe he thought he was seeing a ghost!
The tube journey was equally interesting. I made the mistake of trying to sit down, forgetting that I had on a hooped petticoat!
The hoop got caught under my feet, and the skirt sprung up in front of me, displaying my underwear to all and sundry!
I made the rest of the journey standing up!

On another occasion I travelled on the tube as a Pirate,with a patch over one eye and a black skull-and-crossbones hat.
One af the young men asked me for a date, but when the next week I waited at the scheduled meeting-place he walked past me three times, because he didnt recognise me without my patch and designer stubble!

The two costumes I have photographs of are both from staff parties while I was at Corpus Christi School in Leytonstone.

The first one shows me as a Punk Rocker. My young neighbours coloured my hair and made up my face, and I was not short of a dog-collar, so it was an easy costume to get together.

We went by car, and George(always a quiet man) actually suggested that I should duck down so as not to be seen! 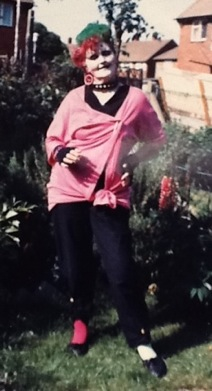 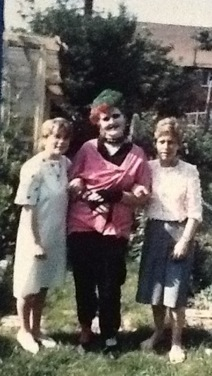 Unfortunately, the colouring would not come out of my hair, although I washed it that night several times.
I had to travel across London in the tube the next morning with faded pink & green hair, and then had to greet my thirteen-year-olds in the classroom!
The staff, of course, knew the situation, but the pupils found it hard to disguise their amusement.
I was grateful for the fact that I had never had trouble with discipline- I was quite an old hand,& they had seen me on stage many times in staff concerts,so were not as astounded as they might have been.....

The second costume I made by hand. It took a long time to stitch.
All the material was bought in East Ham Market.
I made paper patterns, and it fitted well. This time it was a Twenties' party. 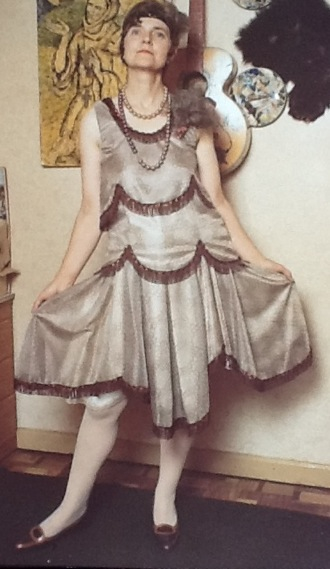 I really loved wearing it,and the copper-coloured shoes were only a pound, also in the market.

On Saturdays I love to see my great-grandchildren dressing up and playing that they are strong and powerful and able to weave spells and kill dragons.

If I could jump up and down a bit more easily, I would willingly join in, but I have to be content to be rescued !
< PrevNext >