When I first put this poem on the website, I didnt know anything about computers & couldnt add pictures,so I thought I'd try again.
First, here is a picture of my class.
I had been their class teacher for three years, and was just about to leave because we had decided it was time we stopped honeymooning & got serious.
I left in July,and our daughter was born the next May. 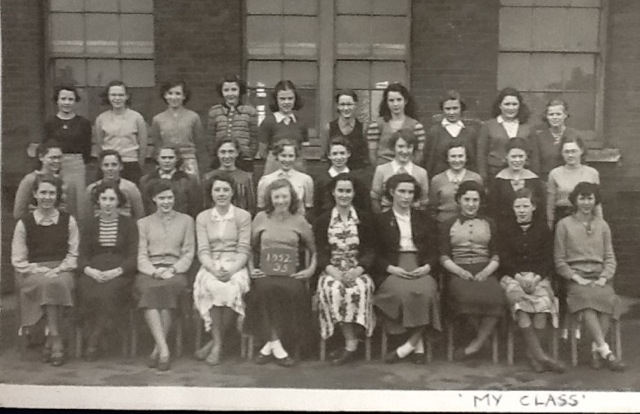 As well as teaching Art and English, I managed to see every child in the school once a week, for a handwriting lesson.
On the back of the photo the girls wrote their names in the 'Marian Richardson' style which was the one the staff chose and which we practised at Monega School in East Ham. 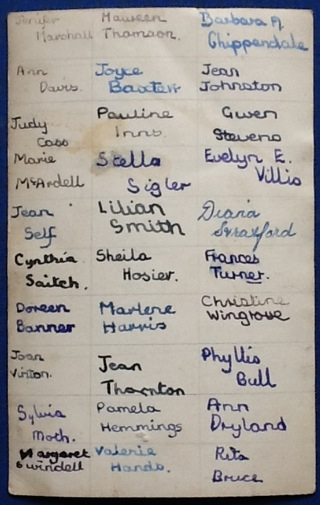 The children, so it seems to me, look quite mature for their thirteen to fourteen years.
They are,for the most part, sitting gracefully, hands in laps and ankles crossed.
The next year would be their last year of formal education, and they would soon be thinking about work.
If they reached fifteen at Christmas or Easter, they could leave school and start on a career.
The classes were streamed, and these were second stream girls in a Modern Secondary School, so those who were chosen for typing lessons might be lucky enough(!) to work in an office.
Many would be shop girls; a much desired job was working in a hairdressers.
To be an air hostess ( a dream job) one had to be considered both glamorous and clever.

When I think how hard these girls worked, and how limited were their choices, I wonder if today's girls realise how lucky they are? I myself, even in the top-stream Grammar School, had to choose between nursing & teaching; although I wanted to be a poet, an artist or a missionary, I was soon firmly put in my place! 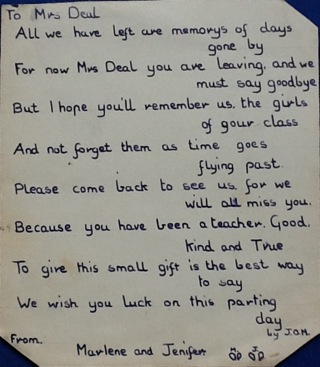 Here is the poem Jenifer wrote, & read at my presentation.
Marlene, her best friend, embroidered a traycloth for me.
Strange to think that she will be in her seventies now! To me, she is still a gentle, rather delicate, auburn-haired girl.
Jenifer was small,and neat, with glossy short black hair. 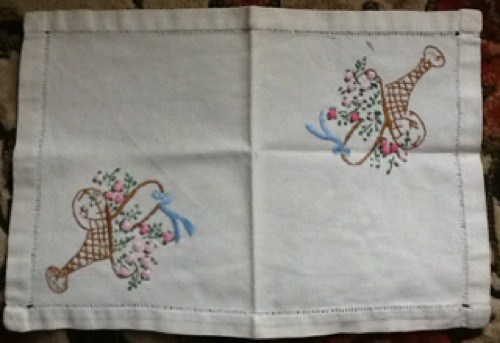 They were a lovely group of girls; I was their class teacher long enough to know them well,and even now, looking at the photo,I can remember most of them individually.
Perhaps one's first class is always the best? 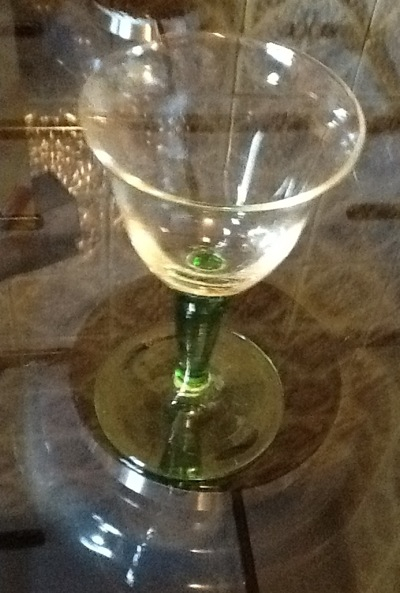 They gave me six green-stemmed wine glasses, thought no doubt to be suitable for my grand teacher's life-style (I can remember one of these girls,watching me write a shopping-list which included Stork Margarine,asking,as if in shock,"Do you eat margarine?"

Sadly, only one of the set remains, but it has pride of place in my china cabinet.
< PrevNext >