Many years ago, when I was at College,and my little sister was miles away, I made her a doll. 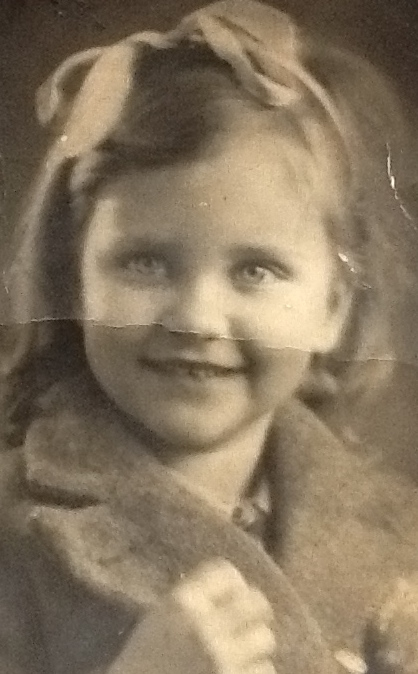 I had very little money, and as it was not long after the war ( many things were still rationed and shops were bare) I used what I could find.
This doll was part of the Art & Craft Exhibition I had to stage in order to complete my final year's work.
The photo was taken at home.
I sat the doll on the back-garden path.
My sister still remembers him.
It is not a very good photo: I only had a box Brownie! 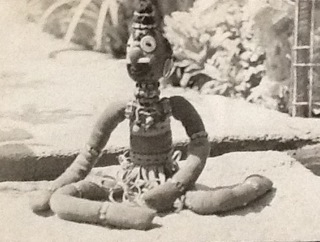 I wanted to make an unusual doll; I never liked pink china dolls with glassy eyes.
This was a soft brown doll, with a bone through his nose and a grass skirt, and beads and earrings.
Perhaps nowadays he would be considered non-u?
Certainly he was received with affection by my sister, who even remembers when the photo was taken.

I used one of my mother's thick stockings for the body, and stuffed it with kapok(the only material available).
The bone was made from a thick cream knitting-needle, the skirt was curtain-fringe, the eyes were white cloth-covered buttons (not used nowadays)and beads of all kinds made the bangles and anklets.
He had curtain-rings for earrings.
He was very bendy, and could be manoeuvred into all kinds of positions. 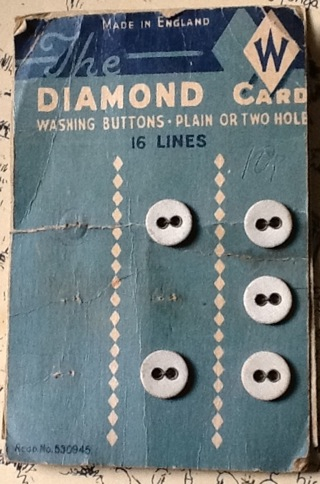 (These buttons were used for nightwear and underwear many years ago. They would survive mangling!)


Not an expensive or glamorous doll, but made with love.
< PrevNext >