A Balloon Ride Over the Masai Mara 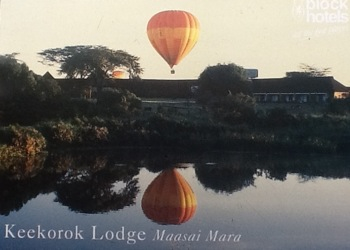 We were staying at Keekorok, a Masai Mara hotel.
It was more like a village:we had our own little bungalow, with a front garden and our own washing-machine.
Without doubt, the best hotel I have ever been in!
This was where we had booked a hot air balloon ride. I was more than usually excited! 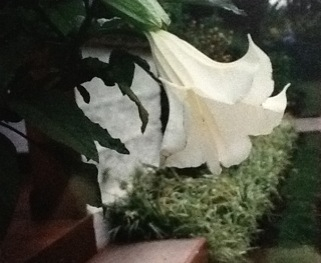 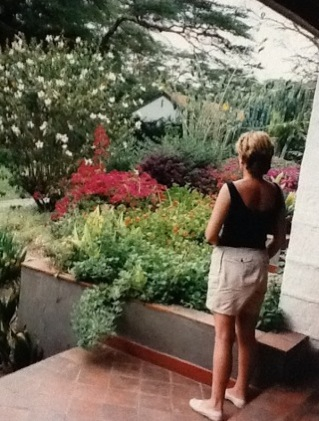 Before 6am we were up,ready for coffee & a final briefing, with detailed instructions for take-off and landing procedures.
We were to be escorted by armed guides; wild animal noises in the background told us that night hunting had not yet finished...
It was dark when we arrived at the site, & the balloons were already partially inflated with hot air.
I was really excited, and anxious to be airborne.

What follows is a series of photos in sequential order.
This was to be one of the most exciting and beautiful experiences of my life, and I cannot hope to describe adequately the sensation of moving freely, high up in the air-- no sound, no vibration: it was, quite literally, 'out of this world.' 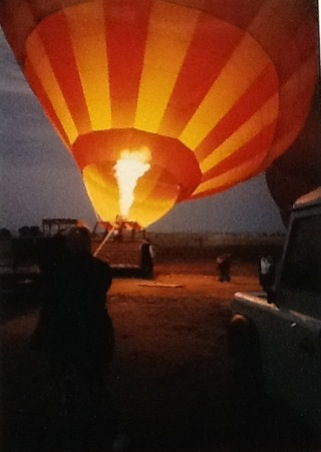 The nylon envelope of the balloon, responding to the lift of the lighter hot air, began to swell, rise & pull upwards.

The balloon is almost vertical-- at this point we were summoned to climb into the basket.
Unfortunately for me, my arthritic hip proved an almost insuperable obstacle: the foothold spaces in the wicker basket were much too far apart, and I could not get leverage to haul myself in.
Eventually, with a lot of pushing from behind, my 'dead leg' was heaved over the top, & I was in!

We crouched in take-off position, clutching the rope handles and bracing our backs against the basket wall.
A final burst of flame, and we were up, up and away!
The sun had not yet risen, and we got to our feet & looked around us.
We were already high above the plain: the sky, brightening in the east, was a soft lavender-grey.
The other balloon, in the early morning light, travelled ahead. 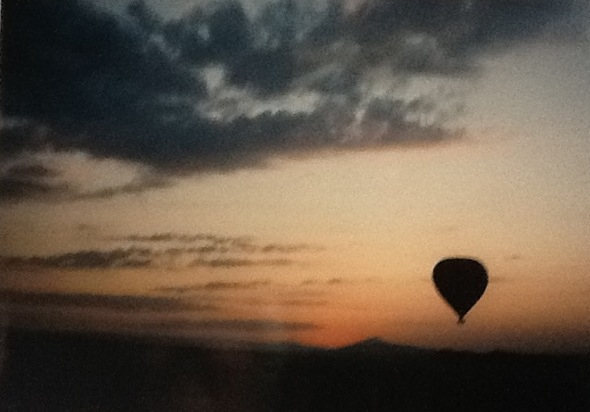 Our balloon moved slowly round as it rose, and we had an everchanging view.
This was a special moment -- sunrise, over the distant mountains. 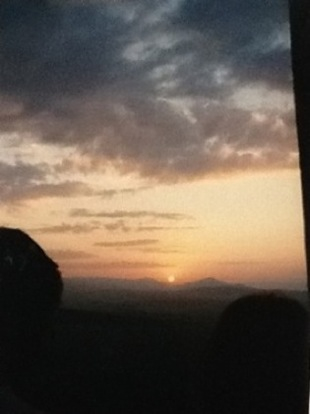 We were rising steadily as the sun grew brighter. 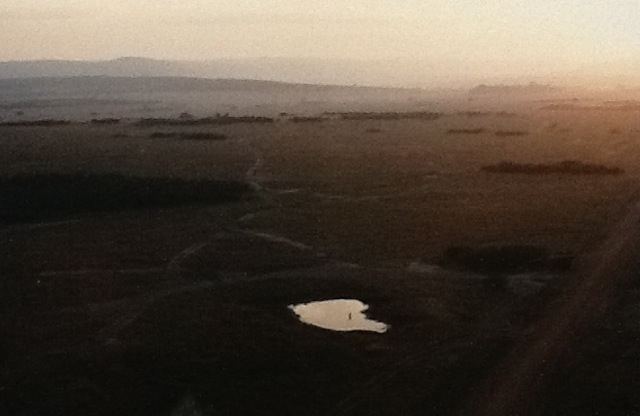 Far below us, still in the shadows, we could trace the woven pattern of the safari-tracks.
In the middle of the water-hole stood a solitary figure -- possibly a bushbuck.
Our shadow travelled ahead of us, huge in the slanting sunrays. 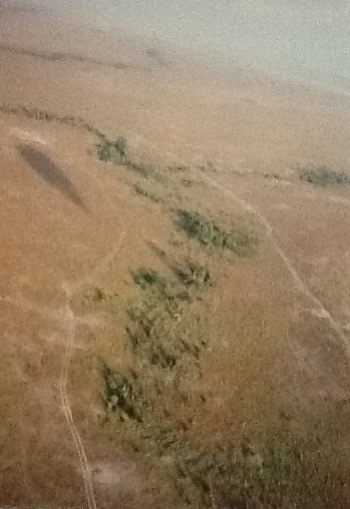 Tim, our pilot, took pictures of us as we sailed along.

I was unable to speak, busy with the experience. 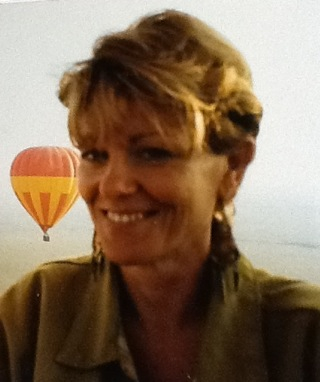 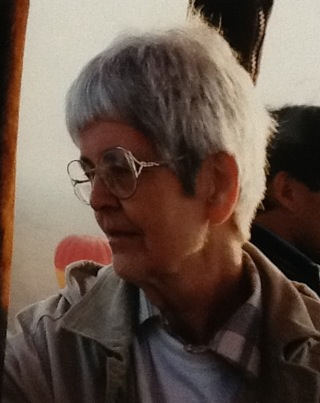 All too soon, the flight had to end: it had passed like a dream.
We began to sink, lower & lower still, closing in on our shadow. 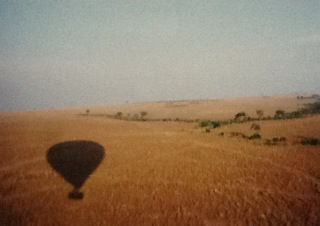 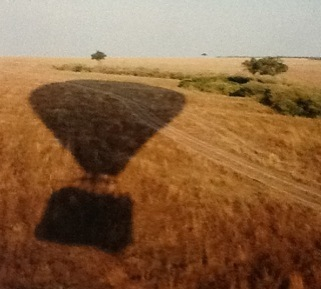 The other balloon was preparing to land. We, too, crouched in the landing position,awaiting the unknown. 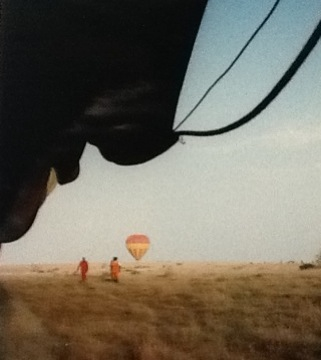 Here you can see our rapidly collapsing canopy.
The landing was bumpy, but by no means uncomfortable.
People came running from all sides to help, pulling on the ropes and keeping the basket stable. 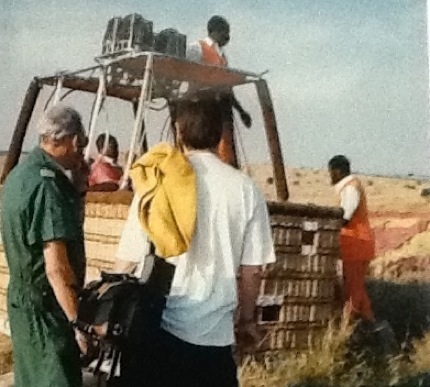 In this picture you can clearly see the height of the top foothold, which I was quite unable to reach.
I had even more trouble getting out than getting in!
Eventually every available man came to my assistance,and an absolute giant of a man lifted me bodily over the side of the basket and set me down on firm ground.
I was very grateful and apologetic, but Tim was not put out-- he told me that once he had to tip the basket on its side so that two old ladies could crawl out!

We were allowed to walk to the picnic-site, a few hundred yards away, and there we were greeted with glasses of champagne.
Set out on long tables was a generous breakfast -- bacon rolls, chicken, eggs, little curry tartlets, all kinds of fruit, tiny sausages, even sugary ring doughnuts.

It was not yet nine o'clock, & we had already seen & felt so much! 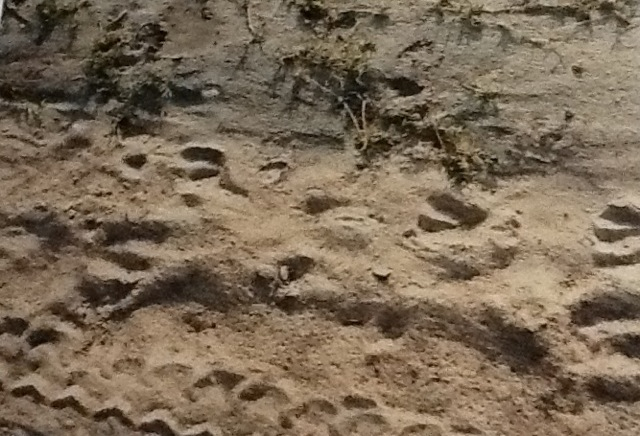 The last picture I took, as we walked towards our breakfast picnic, was of the dusty track beneath our feet.
You can see the tyre-marks of the van and the footprints of humans and a wild deer.
Underneath it I wrote in my diary some advice I had been given:
"Take nothing but photos: Leave nothing but footprints."

I took much more than photos: I took memories....
< PrevNext >