It was in the year 394 that,as far as is known,hieroglyphs were used for the last time on stone to inscribe the ancient Egyptian language. 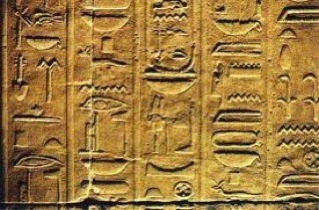 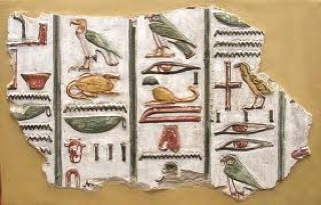 Although it is possible that demotic written with ink and brush or pen on papyrus was in use a little longer, for all useful purposes during the next 1,370 years ancient Egypt was silent; the art of reading her ancient scripts had been lost.
There was noone who could translate the numberless hieroglyphic inscriptions on monuments or pottery.
The language survived only in a form called Coptic,the script & language of the Christian descendants of the ancient Egyptians. 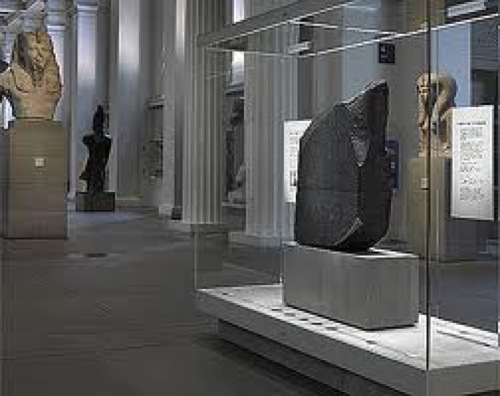 In the Egyptian Sculpture Gallery of the British Museum in London stands a slab of black, granitoid stone, 114 cm in height, 72 cm wide and 28cm thick.
It weighs just under three-quarters of a ton.
It was found in the summer of 1799 in a small village called Rashid, better known to Europeans as Rosetta, a few Kilometres from the sea on a branch of the River Nile. 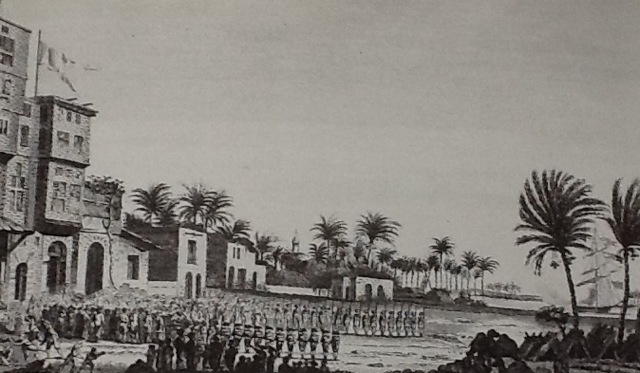 This is an old print of Rosetta, with French soldiers in military array.
The Stone was probably built into an ancient wall which a company of these French soldiers had been ordered to demolish to clear the way for laying foundations of an extension to Fort Julien.

This, the Rosetta Stone, was the key to the translation of ancient Egyptian hieroglyphs.
It bore three distinct inscriptions, the last being in Greek, which could easily be translated.
Very luckily indeed, the officer in charge of the demolition squad realised the importance of the discovery.
He arranged at once to have part of the Greek section translated, in order to ascertain the nature of the text. 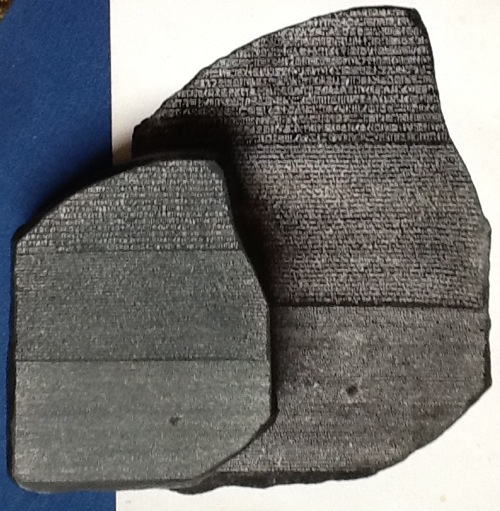 In the autumn of 1799 the Stone was sent to Cairo, and placed in the 'Institut National.'
Many learned men set to work to identify the blocks of script.
They agreed that the second one was the script known as demotic, but at first it could not be deciphered.
They decided to make copies of the inscriptions so that more great minds could be used to solve the mystery.

The surface of the stone was covered with printer's ink, and a sheet of paper laid over it.
India-rubber rollers were used to make a clear impression on the paper.
Several of the ink impressions were sent to scholars in many parts of Europe, and the study continued.
Meanwhile the scholars of the French troops moved for safety to Alexandria, taking with them the precious Rosetta Stone along with all their other specimens and notes.
If they had stayed, the Rosetta Stone would not have come into British possession.
As it was, when Alexandria capitulated in 1801, they were compelled to surrender the Stone and many other large Egyptian antiquities to the British, under General Hutchinson.
After some uneasy discussion( for some time the French General refused to let the Stone go, saying it was his own personal property) Colonel Turner took possession & embarked for England, arriving in Portsmouth in February 1802.

On 11th March the Rosetta Stone was deposited at the headquarters of the Society of Antiquaries in London.
There it was submitted to detailed examination by a number of Greek and Oriental scholars.
In July four plaster casts were made for the Universities of Oxford, Cambridge,Edinburgh and Trinity College, Dublin.
Good copies of the Greek text were engraved & sent to all the great Universities, Libraries, Academies and Societies of Europe. Then the Stone was taken to the British Museum where it was mounted & immediately exhibited to the general public.

It has been on exhibition there ever since.

THE INSCRIPTIONS
These are in two languages, Egyptian and Greek, but in three scripts.
The first Egyptian text is written in HIEROGLYPHS, the formal pictorial script in use nearly 3,000 years before the stone was found. On papyrus hieroglyphs were generally superseded by HIERATIC,a cursive script derived from hieroglyphs.

The second Egyptian text is in DEMOTIC,which replaced the hieratic from about 643BC.

The third inscription is in Greek,and is written in Greek capitals.

THE CONTENTS of the ROSETTA STONE
The inscription is a copy of a decree passed by a council of priests from all parts of Egypt, which assembled at Memphis on the first anniversary of the coronation of Ptolemy V Epiphanes,King of all Egypt.
It concerns the honours bestowed upon Ptolemy V by the temples of Egypt.
Priestly privileges are listed in great detail.

The significance of the Stone is not in its contents, however.

It is in its use as the key to understanding of the ancient hieroglyphic language,lost for 1,370 years; in the many coincidences which led to its arrival in London; and in the shared contributions of many experts, across national boundaries,which eventually cracked the code. 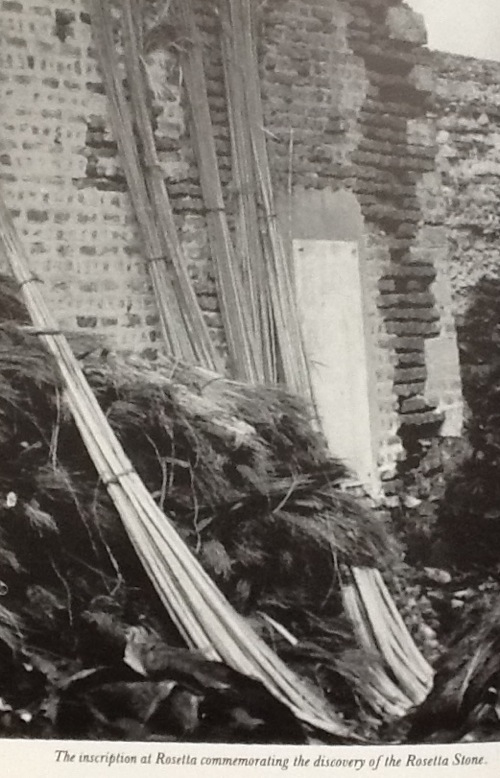