London Street Music in the 1890s

Newspapers and magazines in the late 19th Century often had the most interesting illustrations.
The pictures here are from an article written for the Strand Magazine at that time.
The characters described really did exist,and must have added much entertainment and, often, real pleasure to a walk in London
. The writer of the original article, a Gilbert Guerdon, grouped his characters geographically; therefore,some of his comments do not fit well into my much more multi-cultural point of view. But in fairness it must be said that London has naturally developed areas in which people arriving from other countries have created a 'village' which reflects their own cultural background.
In the 1700s the French silk-weavers settled in Spitalfields, the Jewish immigrants chose the Aldgate area, and in London Chinatown can provide the best evening meals this side of Beijing.
I just find some of his comments about, for example,the 'Italian colony' in Clerkenwell and 'our German friends' a bit condescending.
However, since he chose to describe the German, Scottish and Italian street musicians in the parts of London where he found them, I shall introduce the characters in the same groupings.

According to the writer, there was quite a traffic in german 'musicians.' He tells us that agricultural workers were brought over from Germany,paid four shillings a week, provided with a uniform, board and lodging and an instrument,and after practice in their Fulham Centre sent out into the London streets. 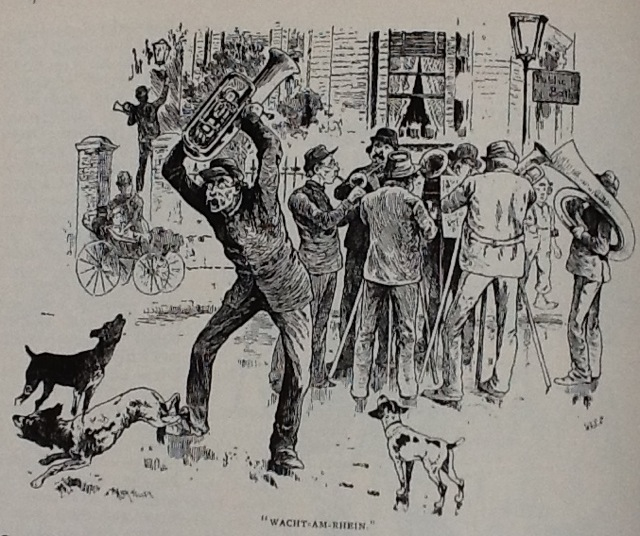 The picture shows one of the German bands being disturbed by stray dogs.
He wrote: "Dogs, particularly singing dogs, take great delight in German bands, and may often be seen, with their noses skyward, lifting up their voices in grand chorus, and are no doubt spuremely disgusted that their efforts to increase the harmony are not appreciated by the bandsmen."

Gilbert tells us, again in a far from empathetic tone, that " the Italian group of street musicians may be dealt with as a group." There were Italian bagpipers, the children with the accordion & triangle, the organ-man and his monkey, and the hurdy-gurdy grinder. 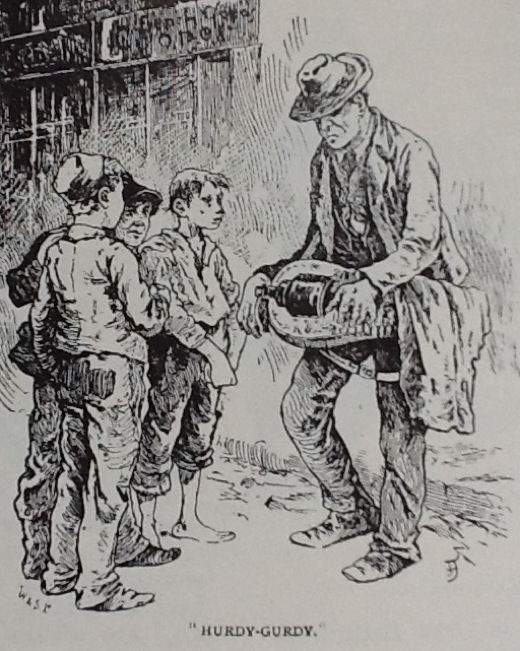 The headquarters of the organ-grinders was on the corner of Little Bath-street, and early in the morning the men would congregate there to collect their instruments.
The premises belonged to one of the principal makers of piano-organs in London, & the ground floor was used to store hundreds of instruments, which were hired out for about ten shillings a week.
All the latest music-hall tunes were available,and the tunes were changed every six months, although "The Lost Chord" and "The Village Blacksmith" were seldom taken off.
A new tune cost nine or ten shillings. 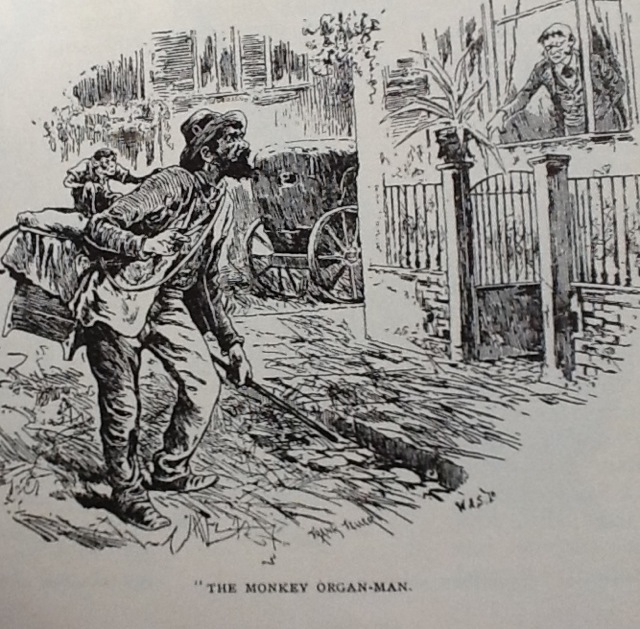 The monkey organ-man in the picture was an old hand at the game.
He would look out for straw on the ground outside a house (indicating a death) and begin to play until the enraged inmates paid him to go away and leave them in peace.
If arrested, he would say he thought the straw was put down so that the noise of the cartwheels should not drown the music! 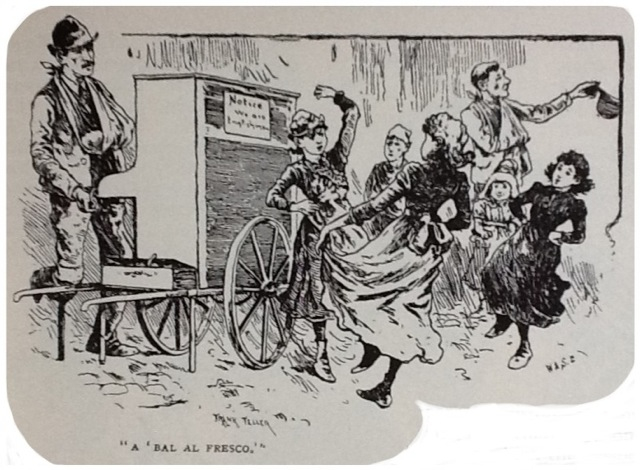 Often the children of the organ-player would dance around the barrel-organ while it played.
This made a pretty picture, and would attract an audience.
Gilbert writes that 'English & Irish girls' would colour their faces with walnut-juice(presumably to look as foreign as possible) and earn a few pence for dancing, collecting offerings and banging a tambourine. 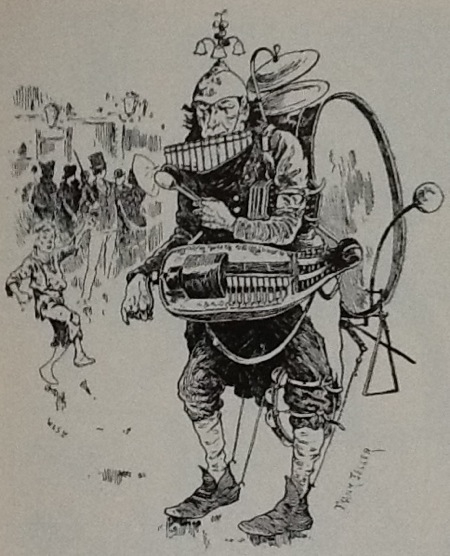 The "One-man Band" was a well-known and popular figure.
He started in the Punch & Judy business, and went on to play the drum & panpipes.
As time went on he added a tambourine,triangle and cymbals, using his legs.
He added a concertina strapped to his left arm, and used his left hand for clappers; with his right hand he played a hurdy-gurdy. Finally he completed the "band" by sewing bells to his cap.
He managed to keep all his instruments in time; his boy went round with a collecting-bowl. 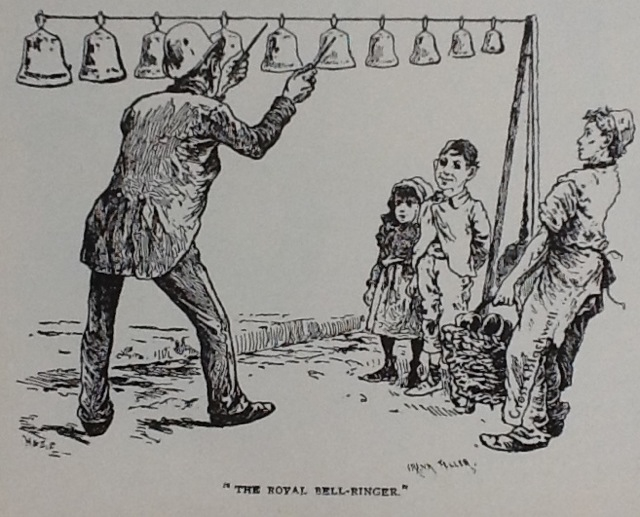 There were some street musicians who made music in unusual ways.
One of these was "The Royal Bell-Ringer."
He found a quiet alley, and rigged up his ten bells on a tightened wire.
With a short stick in each hand, he struck his bells, and produced some pleasant melodies, favourites being "Home,Sweet Home" and "The Bluebells of Scotland"; he would end with a wedding peal. 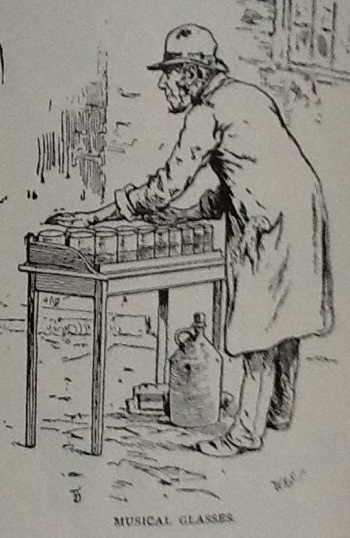 Another musician performed with glass tumblers, sufficient to represent two octaves of notes.
He arranged them on a table in two rows, and put a different quantity of water into each tumbler.
One glass was used for lemon-juice and water, into which he wouldd his fingers every now and then.
By rubbing his wet fingers rapidly round the rim of each glass he was able to produce bell-like notes, and could play all kinds of popular tunes as requested by his audience. 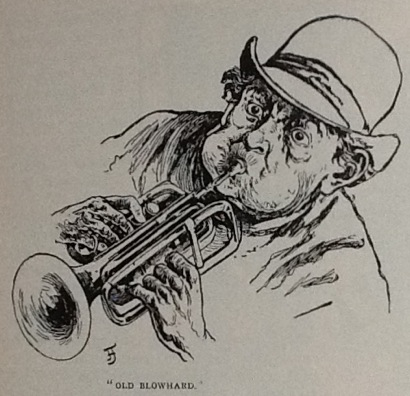 Other familiar individuals were "Pumper" the bassoonist, who was once in a military band but had fallen on hard times, and "Old Blowhard," who could only play by ear but made up for lack of tune by much expenditure of breath.

With blacked-up hands and faces, dressed in striped trousers and black tailcoats, with banjo, concertina, fiddle and tambourine, and an assortment of perky hats, the minstrel group was always sure to draw a crowd.
There was certainly no excuse for anyone to be bored in Victorian London! 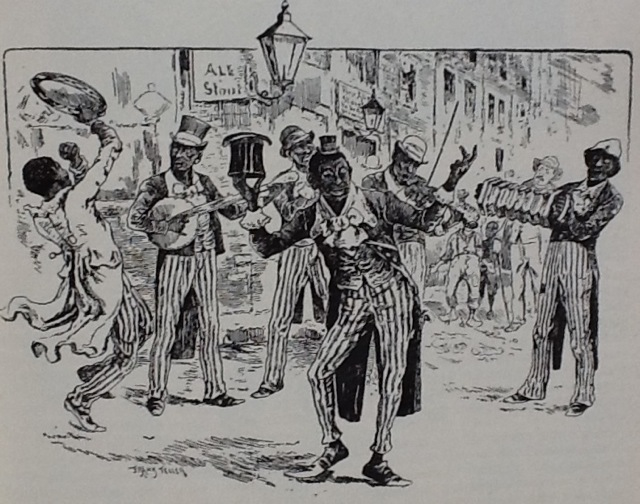 The next article in this series will be about the Firemen in Victorian London!
< PrevNext >