Did you know This? Coronation Facts

Especially for Jubilee Week, I thought I might add some Interesting Coronation Facts to the website!
I have a copy of the Picture Post souvenir issue, and the Daily Mirror one too; the pictures are from the Post, but I researched the facts when I was designing the paper doll kit which is under Arts and Crafts. 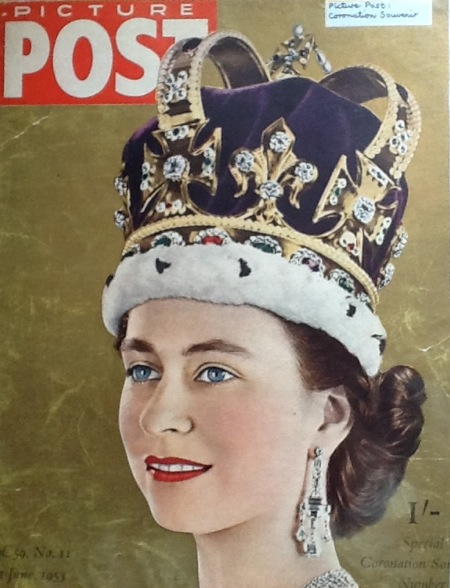 The most important, and central, part of the coronation is The Anointing.
It is a biblical ceremony, based on 1Samuel.10.1., and the prayer used on the coronation day was used by St. Dunstan at the anointing of the first ever King of All England, King (St.) Edgar in 973.
At every Anointing the monarch wears a pure white robe which covers all the glitter of the coronation robe or uniform; no jewellery or ornament must be seen, and a covering is held over the monarch, as this is a private and very special moment. 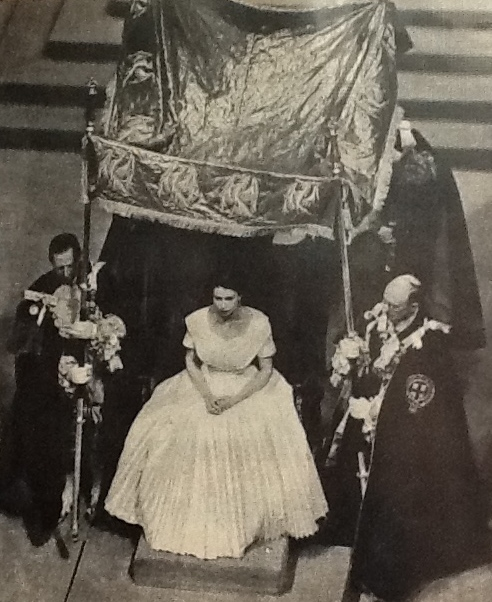 The Oil is held in the Ampulla,a golden eagle.
It is 8 inches high,and is hollow.
The Oil is put in by unscrewing the head,and the Oil drips from the bird's beak into the golden Spoon.
The bowl of the Spoon is divided into two parts by a ridge,and the Archbishop dips his first two fingers into the hollows.
Much of the gold work on the bird dates from 1661, but the screw at the neck was already ancient in the days of Charles 1.
The Ampulla was probably the 'egle' used at the coronation of Henry 1V in 1399.
The Spoon is considered to be from the 12th century. 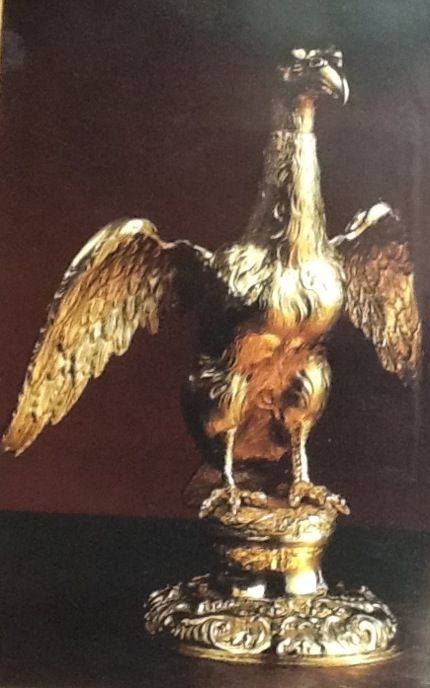 In 1953, at our Queen's Anointing, the Dean of Westminster slowly carried the Ampulla & Spoon from the Altar.
He dripped oil from the beak into the twin bowls of the Spoon.
The Archbishop took up the oil on his fingers, and turned to go under the canopy.Noone saw what happened next, but we could hear his voice, so we understood what was happening.
Then he anointed the new Queen on hands, breast and head, saying the ancient prayer;
"Be thy hands anointed with holy Oil.
Be thy breast anointed with holy Oil.
Be thy head anointed with holy Oil; as kings, prophets and priests were anointed.
And as Solomon was anointed by Zadok the priest & Nathan the prophet,so be thou anointed,blessed & consecrated Queen over the Peoples, whom the Lord thy God has given thee to rule & govern..."

In mediaeval times as much of the Oil as possible was kept on the body, and especially on the monarch's head, so that its goodness would sink into his "inner parts."
It was the custom to place a linen cloth on his head,and cover that with a special cap, called a 'Pilieum Regale',to keep it in place. Later, from Edward 111 in 1327, a linen coif (a kind of cap) was tied under the chin.
The monarch's hair remained covered for 8 days, after which time the hair was washed in the Royal Chapel.
Mass was said and the bishop removed the covering,which was then burnt, & washed the king's hair (for Henry V1 lukewarm white wine was used).
Finally, the king received a circlet of gold which he wore for the rest of the day.

After our Queen was anointed, the Archbishop took a small square of fine linen and wiped away the surplus oil.

Since 1625(Charles 1 ) fresh oil has been prepared for each coronation; for him the ingredients were oils of orange and jasmine, distilled roses, cinnamon, oil of bean, extracts of flowers of benzoin and ambergris,musk and civet. 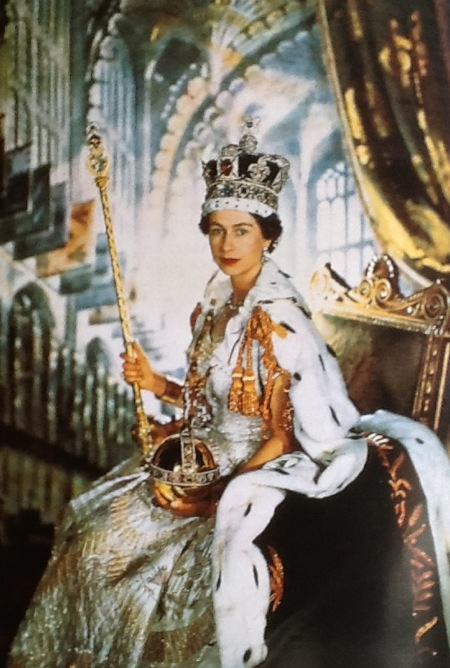 This is my favourite picture of our Queen, in all her royal splendour.
It is important to know that all this gold and glitter was not the most important part of her coronation, which was in fact a dedication service.
She has taken that dedication very seriously throughout her reign.
< PrevNext >