Tales from the Animal Club

The Animal Club at Corpus Christi was very popular.
Nowadays, when Health & Safety considerations overshadow any exciting activities, I dont believe it would have been a possible undertaking.
At breaktime there were always visiting children, popping in to see Milk and Biscuit and the babies, or bringing gifts of titbits, or anxious to clean Gilbert & Sullivan's large, watery home.
The club met once a week after school, and sometimes at weekends we would take one or two of the hamsters (Ginger-nut being our prize-winner) to a show. 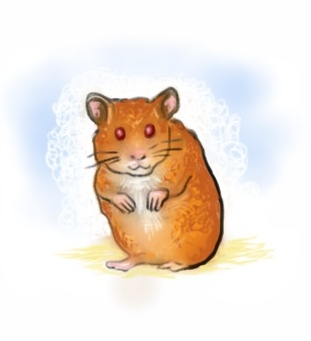 At one of our meetings, one of the boys surprised us by appearing with a pigeon on his shoulder!
He told us that this was his pet, and trained (he did not tell us what the pigeon did).
Everyone was very excited,and gathered round to admire the bird. 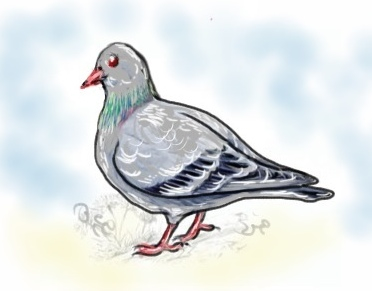 Unfortunately, the meeting was in the Assembly Hall of a large red-brick Victorian building.
Alarmed by the approaching children, the pigeon flew, high up into the roof-beams, and the whole meeting was spent in attempts to persuade her to return to her master's shoulder!
It took an hour until the 'training' kicked in and she was back under some kind of control.
We never did find out what the bird was trained to do! 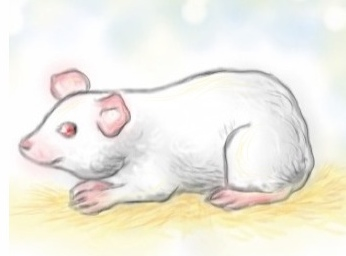 The last hamster we acquired, 'Lily the Pink', was rather long in the tooth in more ways than one, and sadly hamsters do not have very long lives.
One morning I was greeted by two anxious children( they would get to school really early,to clean cages and change water and stroke their pets).
Lily was lying on the floor of her cage, apparently unconscious.
I was given lots of advice...
"Give her the kiss of life, Miss!"
I had to point out that if I kissed Lily she might bite me to the bone.
"Give her brandy, Miss!"
I felt that brandy might kill her, but as she was in any case in a precarious state of health, decided to get a second opinion, and sent them off to Sister Philomena in the Cookery Department.

Within two minutes, Sister Philomena came hurrying over the playground, black robes flying behind her, bearing a bottle of brandy and a teaspoon.
We lifted Lily gently and held her while brandy was very carefully dripped into her mouth.
Amazingly, she survived, and lived another full year.

My favourite member of the club was brought to me one cold morning, just before school.
It was a tiny, curled-up hedgehog, not more than a week or so old.
He appeared to be dead, but I did not say so.
I sent one of the girls out for catfood ( protein, in the form of slugs and snails, being a hedgehog's preferred food, NOT bread-and-milk .)
The little spiky body remained stiff and still, but we kept him warm, and I held him in the palm of my hand as we filed into Assembly. 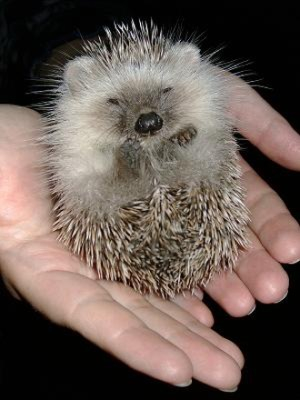 Assemblies were about half an hour long, and as we stood there singing we were all thinking about the small ball of prickles I was holding.
Every now and then one of the children would steal a sideways glance at me, but I tried to behave normally and did not even smile.
Then something amazing happened!
There was a slight movement in my hand, and the little body stirred, slowly uncurling.
I could feel his strength as he struggled to turn over.
I looked at my class, and broadly smiled, pointing to my hand.
To their credit, they controlled their jubilation until we were back in the classroom.

There is a great ending to this story.
Milligan (as we named him, for obvious reasons) not only survived, he came home with me, lived in controlled surroundings until old enough to survive on his own, and was let free.
He stayed close for quite a while, but in the end enjoyed his freedom.
There are pictures of him in my lap, climbing about on me in the sunshine as I sat on my deckchair in the garden. 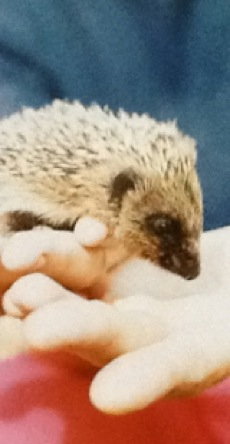 I think the children learnt a lot from the Animal Club.
Books are good and useful things, but some things are not gleaned from books.
They learnt to respond to the needs of the creatures in their care, to live up to responsibilities, to be calm and gentle, to give and receive love.
The Animal Club was always my favourite club.
Certainly the children enjoyed it, and worked hard every day to see that their pets were well and happy.
< PrevNext >