Hello Deary and the Parrot

My mother worked very hard in the house, but as far as I can remember she did not go out during the day, and only had three friends, who very occasionally visited; Aunty Dave,who was not a relative; a fat(sorry!) lady who smelt of face-powder & too much scent and wore pearls and fur (I dont remember her name, but Mum seemed to defer to her,and she lived in Hove,which was posh); and my favourite, Hello Deary,who actually became one of my friends.
I dont know why she was called Hello Deary, but I certainly never heard her use the phrase.
She was little and old.
She sat in Dad's big chair smoking cigarettes, and clutched a big black handbag in wrinkly hands.
She was a widow,and I felt she was a free woman, unlike my mother.
She was out & about in the world.
She was an unlikely friend for my mother, but I think Mum felt herself less daunted by her than by the posh scented woman.
They seemed at home with each other.
Hello Deary lived quite near us, a few streets away in fact, so I knocked at her door while I was on one of my aimless walks.
She was very welcoming.
Her small, Victorian terraced house was crammed with furniture and ornaments,and in her living-room was a huge cage; in the cage was the only parrot I ever really got to know well. 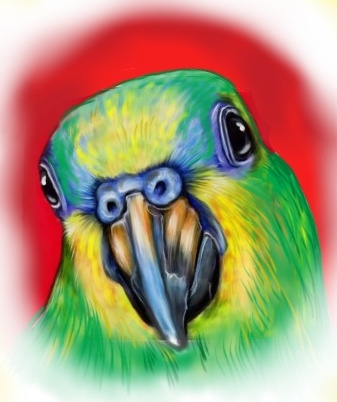 He was a blue Amazon parrot,and could talk like a human: in fact, I sometimes forgot that he was a bird.
He could sing whole songs!
One of his favourites was:

"And if I die
Dont bury me at all
Just pickle my bones
In alcohol.

Put a barrel of beer
At my head and feet
And then I know
My bones will keep."

He could imitate the ring of a telephone,and would then say,"hello!" and carry on a stream of imitation conversation--not real words, but it sounded like talk, with laughs and pauses in between.
He copied the voice of the newsreader on the radio, and joined in the songs, and when Hello Deary pushed a grape through the bars he would nip her with his beak and then laugh madly.
He was allowed to fly about the room, and was an amusing companion for his mistress, who seemed to have no family otherwise.
On sunny days his cage was put out on a table in the garden.
Once he flew away,into the grounds of the Sanitorium, and it was two hours before he decided to go back to his cage.
By that time we had collected a little crowd, including a uniformed boyscout.
With his brightly coloured plumage, and a constant stream of odd words and laughter, the parrot flew from tree to tree until he was tired of his liberty.
I think he cheered up the patients! 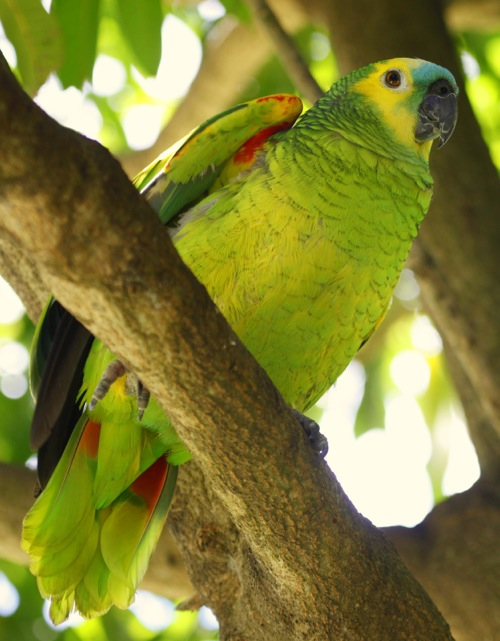 Hello Deary was great to talk to.
For an old lady, she was a sprightly person,and she usually found something to feed me with.
She could make little treats from whatever was in her larder--currant pastry rolled in sugar and then baked, treacle tarts, jam buns, lovely stuff.

I never knew her real name,or how she met my mother, but she was a wonderful character.
I spent some happy hours in my childhood with her and her feathered friend.
Strangely, I never knew their names.
Just Hello Deary & the Parrot!
< PrevNext >