Everything has a Name

This was from the beginning a struggle.
They were both strong-willed, fiery characters,& if Helen was ever to live in normal society Annie had to win her over - but how?
For 5 years Helen had ruled over the household & behaved like a wild animal, demanding attention and injuring those who thwarted her.
Annie was determined to tame her, but wrote: "I have to discipline her without breaking her spirit. I shall not attempt to conquer her by force alone."
At first the outlook did not seem promising.
Helen would not kiss Annie, struggled from her arms, demanded cake(by signs) from her bag, & when Annie took her doll to spell its name into her hand she threw a temper tantrum.
On the second day Helen was so violent she knocked out one of Annie's front teeth!
Annie was appalled at Helen's table manners.
The child had been allowed to wander about the room, snatching food from anybody's plate and cramming it into her mouth.
Annie asked the family to leave the room & locked the door.
She then sat down & calmly ate her breakfast.
Helen pulled at her chair and tried to grab her food but her hands were pushed away.
She pinched Annie and was slapped.
She checked for the family and they were gone!
She screamed and kicked on the floor and was ignored. 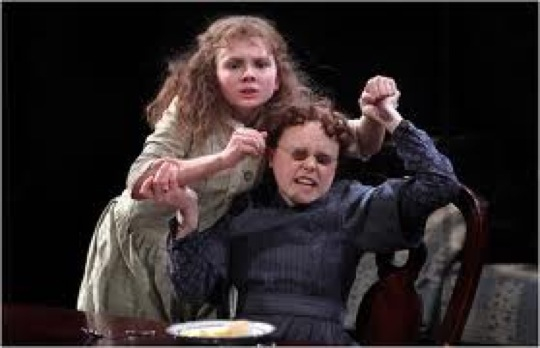 (this illustration is from many dramatic performances, in both films and plays, of the story).

Because she was hungry, Helen found her chair & sat on it.
She began to eat with her fingers and was given a spoon, which she threw to the floor.
Annie made Helen pick up the spoon, put her in her chair & guided her to eat.
Next Annie tried to get her to fold her napkin.
Helen threw it down and went to the door: finding it locked, she threw another tantrum....
It took almost an hour before the napkin was folded.
At last Helen was let out into the sunshine.
She had met her match!
Annie was exhausted.
She went to her room for a good cry and was ready to start again.
She could see that the indulgent family were preventing her from reaching Helen.
If the child was ever to be educated, she needed consistent guidance,and Annie needed to be alone with her. 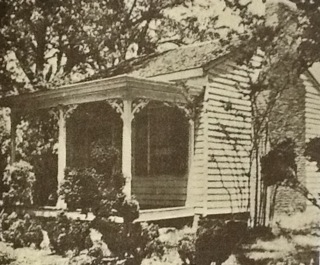 THE COTTAGE
In the grounds of Ivy House there was a small cottage.
Annie suggested that she should stay there with Helen for two weeks, with a child servant to run errands.
If they drove there by a long roundabout route Helen would believe that she was far from home.
Helen's family could visit daily to observe through the windows what was going on.
In their desperation, they agreed to Annie's suggestion.

The cottage was the scene of some spectacular battles of will during the next fortnight, but little by little Annie began to tame her wild pupil.
The simplest procedure became a war-zone: it took hours, and often violent struggles, to get Helen to obey her teacher.
She refused to sleep in the bed, would not dress, threw things, broke crockery: but Annie refused to be intimidated.

Slowly,slowly Helen came to understand that there could be order & calm if she co-operated,& the affectionate side of her nature began to show.
They were moved back into the main house, and that day Annie wrote,"My heart is singing for joy this morning.
A miracle has happened!
The wild little creature of 2 weeks ago has been transformed into a gentle child.
The little savage has learned her first lesson in obedience, & finds the yoke easy.
It now remains my pleasant task to direct and mould the beautiful intelligence that is beginning to stir in the child-soul." 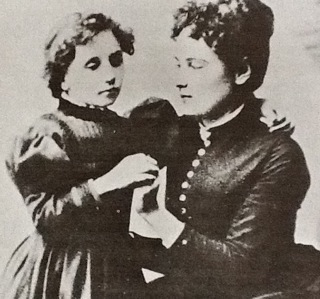 Helen and Annie were both ready for the next step.
To live fully in the world, Helen had to be able to comminicate, to read & write.
Annie had to show her what WORDS were for.

April 5th.,1887: 'THE MIRACLE'
Helen later wrote, in one of her books: 'Before my teacher came to me, I did not know that I am.
I was a phantom living in a no-world.
I was carried along to objects & acts by a certain blind natural impetus.....my inner life was a blank, without present, past or future, without hope, without wonder or joy or faith.'

IMAGINE for a moment that six-year-old's life in the silent dark.
No night or day, no speech, no contact with the world beyond arm's-length, no colour,music,laughter...
She was in prison for life, and unable to explain herself or understand others. 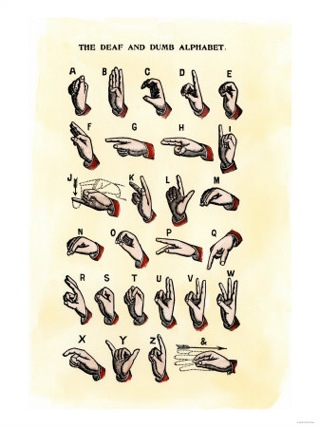 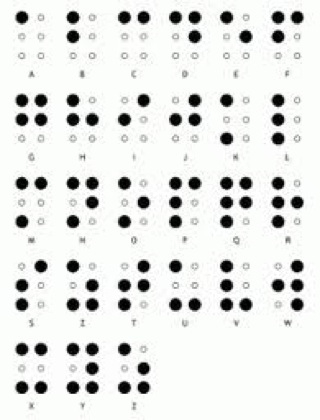 Because of her friend Laura Bridgman, Annie knew the use of the manual alphabet.
From her first meeting with Helen she had spelled the name of everything she touched into her hand.
She spelled 'cake' and gave her cake, 'doll' and gave her a doll, 'shoe' and gave her a shoe.
Helen thought it was a game - Annie even found her holding the dog's paw and spelling into it - but she had no idea what it meant.
She thought both 'mug' and 'milk' meant 'I want a drink'.
Then Annie had an idea. 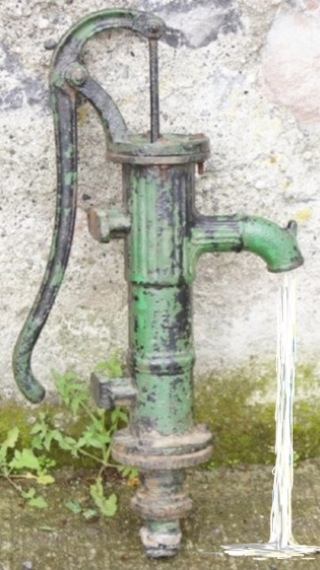 She took Helen outside to the pump & got her to hold her mug under the spout, while she pumped.
As the cold water gushed out, splashing over Helen's hand, Annie spelled 'w-a-t-e-r' into her free hand.
This is how she describes what happened:

'The word coming so close upon the sensation of cold water rushing over her hand seemed to startle her.
She dropped the mug and stood as though transfixed.
A new light came into her face.
She spelled 'water' several times.
She dropped to the ground,patted it and asked its name,then touched the pump & did the same: then, suddenly turning round, she asked for my name.
I spelled 'Teacher.'
Just then the nurse brought Helen's little sister to the pumphouse & Helen spelled ' baby'.
All the way back to the house she was excited, & learned the name of every object she touched, so that in a few hours she had added 30 new words to her vocabulary.' 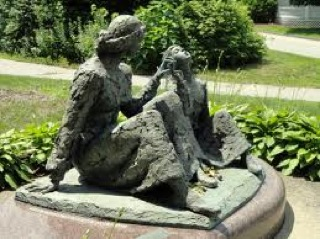 Helen's development as a human being, able to express herself, converse with others, learn languages, write books & travel the world, began on the day when she realised that EVERYTHING HAS A NAME!

In Part 4 the amazing development of this seven-year-old, through the devotion of her teacher, will hopefully interest, even astound you.
Both their lives have inspired me in my teaching career.
< PrevNext >

This is such an amazing and touching story. Thankyou for sharing :)

I have always looked on Helen Keller as an example of the power of the human, God-given spirit which can never be beaten by the dark.xxxx
#1 Emily Manyumbu 2013-06-13 23:15
This is such an amazing and touching story. Thankyou for sharing :)
Refresh comments list