Fossicking is a word invented by my daughter and myself when we were much younger, and spent time looking for treasures on beaches.
All through my life I have collected fossils.
On our early camping holidays we visited Devon and Cornwall several times, and my first serious attempts at fossil-hunting were on Somerset and Devonshire beaches, where ammonites are really common.
We found some excellent examples, but this,my best, was bought in a charity shop in Norfolk! 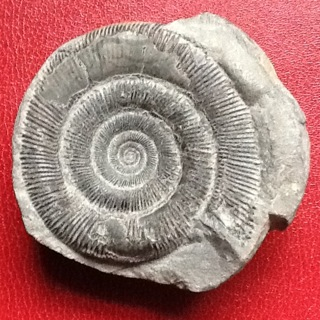 As a child I had found chalk fossils,none of them particularly impressive, on the Sussex downs, and was fascinated to find seashells, many millions of years old, so far away from the sea!
My father told me about the belemnites he used to find in Cambridgeshire. 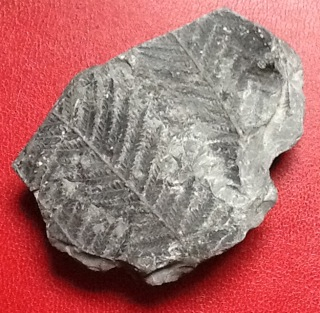 Coal is a good source of plant fossils.
In the days of thick London fogs, before smokeless fuel became compulsory, I would break up large chunks of coal and find the imprints of leaves and bark from the carboniferous period, perfect in every detail.
I used a small hammer, and Im afraid badly damaged the fireplace tiles, but very luckily my husband was tolerant and bore with my many enthusiasms.
I only found small leaves and twigs ; the fern leaves above were given me by the Natural History Museum.

The best fossils we ever found were at Steeple bay, where our caravan was on site for some years.
In fact, they were so good that the Natural History Museum not only asked to keep one or two for their collection (mostly for research purposes), they gave me some excellent fossils in exchange!
I noticed that 'stones' on the narrow beach were bicoloured, grey and dark brown, and collected a few.
On further examination, I found that the brown parts were fossil remains of what looked like King Prawns but were in fact very small lobsters. 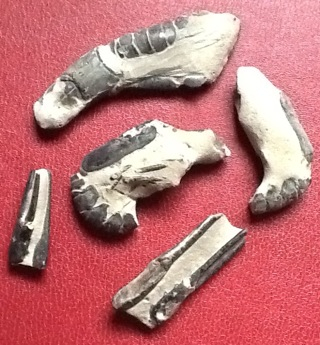 At Steeple Bay we found many small fish-teeth and crabs,besides the lobster Hoploparia Gammeroides, from the Eocene, London Clay beds. 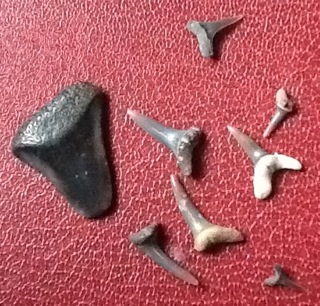 The Natural History Museum published a book about the period, and 'my' lobster was on the cover!
Can you see it? 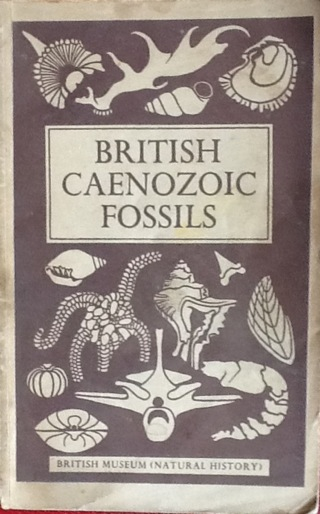 I went with Mary to the museum, and we were taken behind the scenes to deliver our finds.
We went several times, and they were very helpful and informative.
The experts there would examine our discoveries and let us know when to collect them.
The fish teeth would be neatly labelled and put into small glass test-tubes, and corked for safety.
We are very lucky indeed to have such helpful experts in our museums. 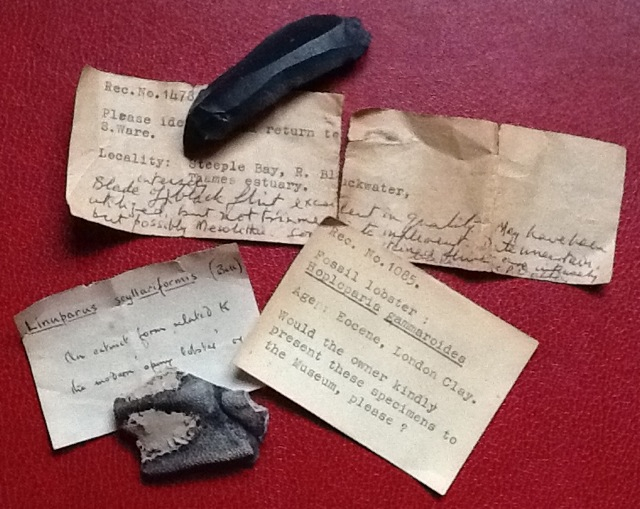 They always labelled everything so carefully, and gave us such interesting information.
The black flint flake was the only one we ever found.
Two of the tiny crab fossils were of an extinct species. 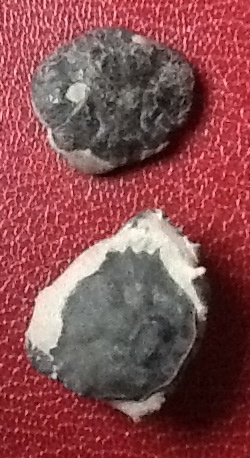 They told me that an eight-year-old boy on Sheppey Island had the best collection of seed-fossils, found on his local beaches, that they had ever seen.
Children are often started on scientific careers by beachcombing!

I have never been an idle sunbather when on holiday.
I have to find out more about my surroundings, and lying about with my eyes shut would seem to me a great waste of an opportunity to discover something new.
I was always crouched on the beach, scrabbling, and George said the only part of me that ever got suntanned was my bottom!
Here I have photographed some of my small collection, and given you a little information about where the fossils were found and what they are.
In the next article I will write about how fossils are made,(I expect you know already), and tell of some of our hunting adventures.

You really should try fossicking, it's very enjoyable!
< PrevNext >