A Visit to the Scilly Isles

While I was at Corpus Christi in Leytonstone, George and I went with a party of boys and girls to the Isles of Scilly.
My friend, Senior Mistress and responsible for the welfare of the girls in our school, wanted our pupils to experience a completely different environment.
Our opposite numbers in the school on St.Mary's were just as interested in giving their students a wider view of the world.
The East End of London and the Scilly Isles are widely dissimilar, both geographically and culturally.
Both before and after the visit there was a great deal of communication between staff and pupils, and work and letters were exchanged. 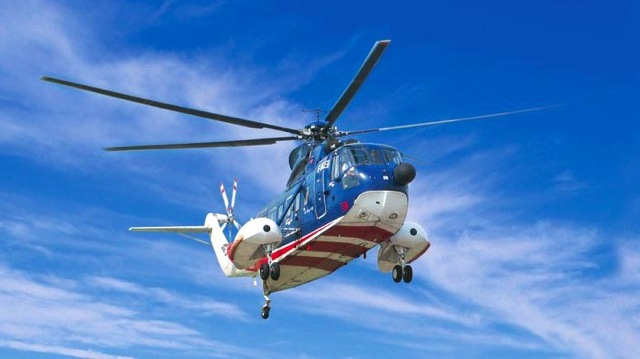 The whole adventure was a happy one.
The night train, with fitful sleep: the helicopter flight on a beautiful sunny day: the hotel where all vegetables were home-grown and delicious and we could see and smell the warm southern ocean from our windows.
Wild garlic grew everywhere on St. Mary's, and some seed must have travelled home with me, in my clothes or on my shoes, because after all these years mine is the only garden in Dagenham which produces, every spring, the same nodding white bells and pungent perfume! 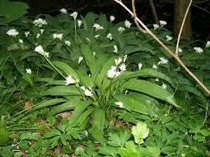 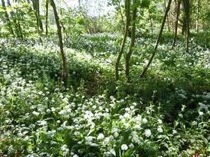 Scillonians tell the story, that between the Islands and Land's End, under the sea, lies a land called Lyonesse.
It is said to have been a richly fertile land, inhabited by strong and handsome people; upon what is now the Sevenstones Reef stood a turreted castle, and from the highest turret you could look down upon no less than 140 churches.
This beautiful land was once, long ago, engulfed by the sea.
They say that on a calm day, when the sea is still, you can hear the sound of the church bells as they are gently moved by the currents.
There is a family in West Cornwall who claim to be descended from the only survivor of the flood.
He galloped so furiously to escape the rushing sea that his horse lost a shoe, and in their coat of arms they have three horseshoes. Although this tale may be legend rather than truth, at low tide it is possible to wade between Tresco and Samson, and the traces of a Bronze Age settlement, the huts and field walls, can be clearly seen, covered in seaweed. 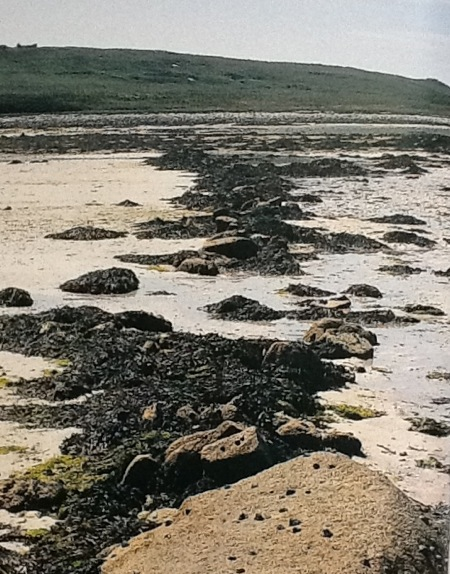 The students had arrived armed with sketchbooks and notebooks, and almost as soon as we arrived two of the girls were sitting in the sunshine trying to capture the view.
The sands were creamy-white and the sea deep blue,and there were no human beings to distract; we could have been the only visitors. 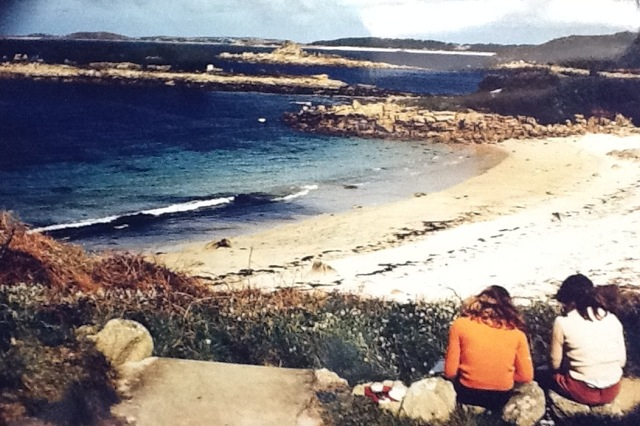 During our stay we visited the different islands; each has its own character and offers a different experience.
Boats leave from St, Mary's twice daily, and on our journeys we were to see seals, diving cormorants and gannets,and puffins. 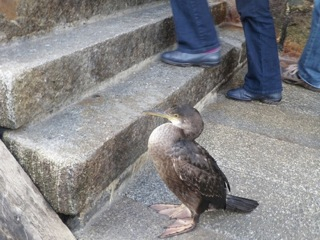 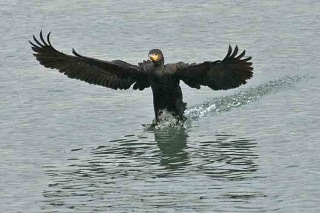 We got to know the boatmen very well, and they were great story-tellers.
One of them told one of the boys that the great rocks produced smaller ones,and pointed out the offspring as we passed the lighthouse... 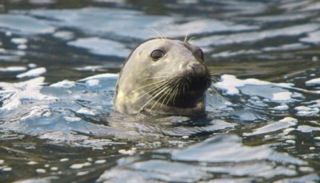 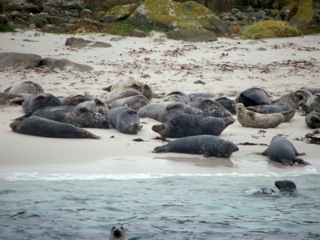 One of my favourite islands was St. Agnes,which is one of the smallest of the Islands and separated from the others by the deep channel of St. Mary's Sound.
Because it is the first landfall it has had more shipwrecks than the other islands, and in the 19th century had its own lifeboat station.
Very few people live on St. Agnes, and the lifeboat crew were 10% of the whole population! 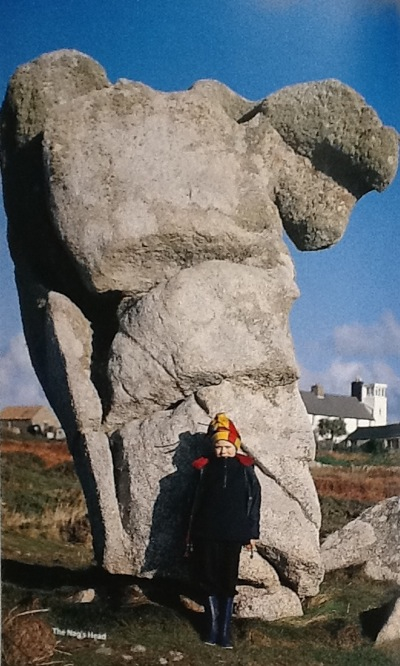 While we were there we borrowed a frying-pan from one of the cottagers,and made a small fire on the beach and cooked sausages! The frying-pan did not take kindly to the open fire, but luckily our kind provider seemed happy with its blackened appearance. Everyone we met was really hospitable and friendly.
We sang as we crossed the island, and when we reached Beady Pool spent a happy hour searching for the ceramic beads which are still washed up there from the wreck of a Venetian ship.
We collected a small tobacco-tin full of small red and black beads. 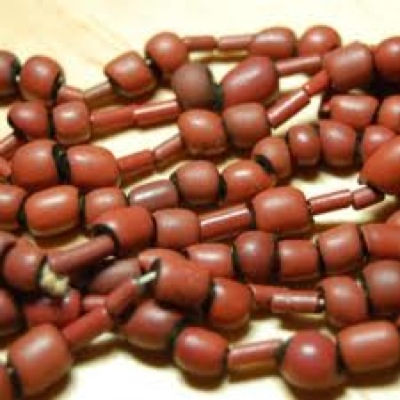 Tresco was perhaps the most interesting Island.
It is leased from the Duchy of Cornwall by the Dorien-Smith family, who live in Tresco Abbey, and is the only Island with this relationship.
In the 19th century it was leased by Augustus Smith, who was a far-sighted proprietor and by introducing new agricultural methods and developing the flower and tourism industries brought employment to the Scillies.
All the daffodils we see in the shops in England in the early Spring are the result of his input so long ago. 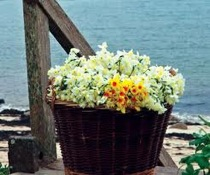 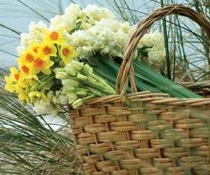 Augustus also funded the building of schools on the Islands, and started the now world-famous Abbey Gardens.
The gardens contain a wide variety of subtropical plants,many of them brought from abroad on visiting ships. 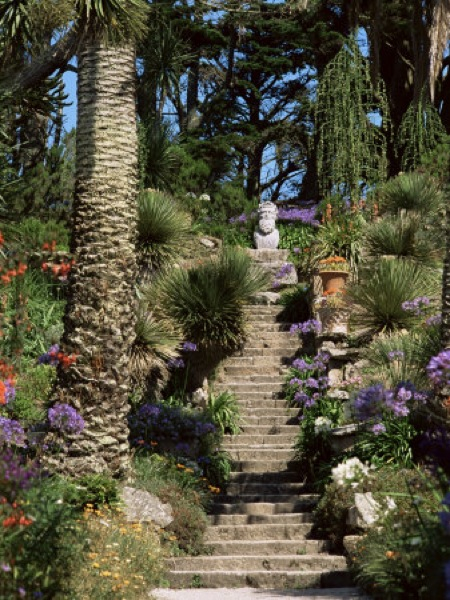 The climate of the Scillies, partly due to the warm Gulf Stream, encourages plant growth, and particularly in Spring and Sommer the gardens are a blaze of colour and rich in foliage.
The ruins of the old Abbey, abandoned in the 14th century, make a beautiful framework for the tropical trees and flowers, and steps and statues and interesting benches make this one of my favourite British gardens. 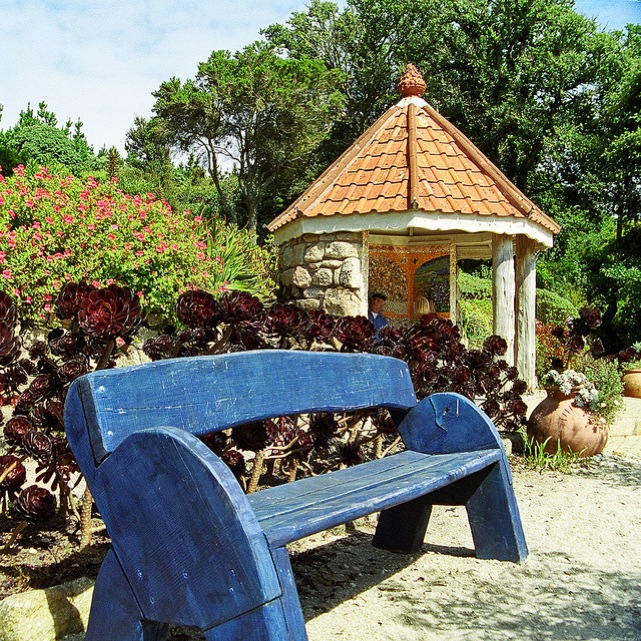 Non -gardeners will be interested in the artefacts in the Gardens, gathered from the surrounding Islands, many of them really ancient.
There is a Bronze Age holed stone or menhir, a Romano-British inscribed stone and a Roman shrine found in a well beneath the Garrison wall. 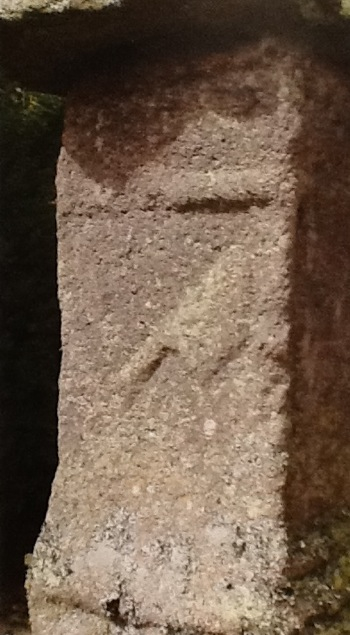 At Valhalla, under a sort of bicycle-shed roof, there is a wonderful collection of figureheads from ships that were wrecked on the Islands.
As I was photographing these brightly-painted characters, I glimpsed a flash of blue out of the corner of my eye, and when I turned round I found there was a peacock behind me!
He paraded up and down as if he owned the exhibition.
Later, a pure white peacock joined him. 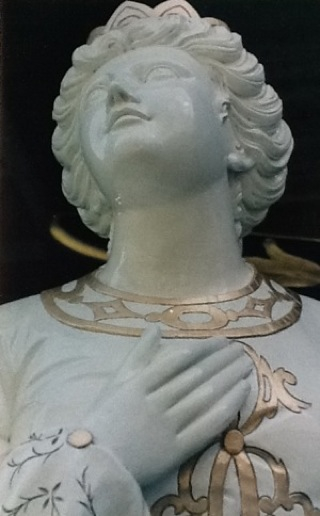 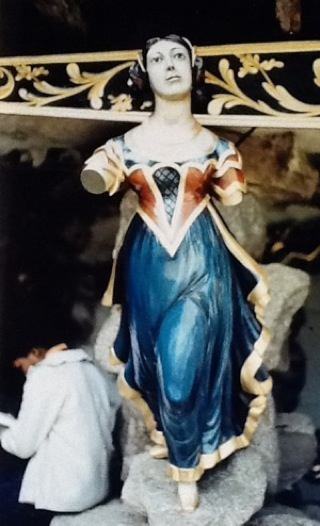 The figureheads are kept in perfect order, and remind us that many shipwrecks have been recorded here.
In the days of great poverty, before Augustus Smith, a shipwreck was a source of revenue for the islanders. 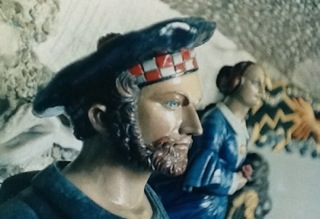 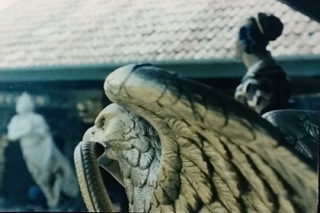 We heard stories of those who tied lanterns to the tails of cows,so that the ships crew might mistake the wandering light for a signal and the ship would be guided on to the rocks.
We spent a wonderful 15 days in the Scillies, and enjoyed peace and fresh sea air, excellent food and hospitality, and beautiful surroundings.
If you would like a different sort of holiday, take the night train to Penzance and follow in our footsteps! 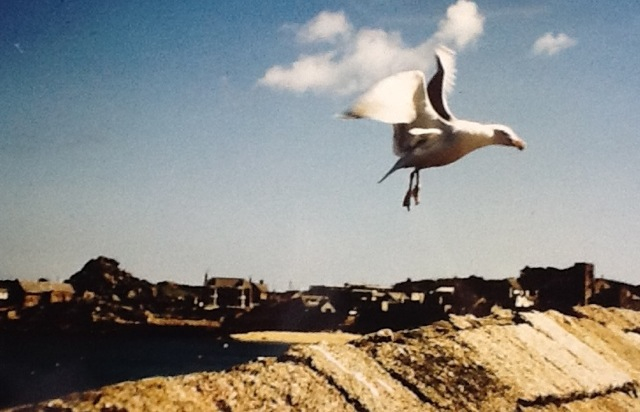