If you sometimes feel that nobody ever listens to you, try Bingo calling!
EVERYBODY will listen to you!
They can't afford to miss a single word! 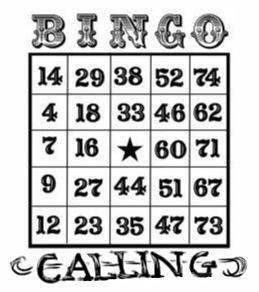 3 Cup of tea: You and me, which is a romantic rhyme

4 Knock at the door

7 Lucky seven:God's in heaven:Lucky for some(7 is considered lucky in some cultures)

9 Doctor's Orders: number 9 was a laxative pill given by army doctors in WW2

13 Unlucky for some, Devil's number,Baker's dozen

21 Key of the door:the traditional age of majority

23 Thee and me: The Lord is My Shepherd(first words of Psalm 23)

24 Two dozen:Knock at the door

27 Little duck with a crutch:Gateway to heaven

28 In a state(two and eight in rhyming slang): Overweight

30 Burlington Bertie:Dirty Gertie: Speed Limit: Flirty thirty:Blind 30. In 1900 there was a music-hall song called Burlington Bertie. In 1927 a statue called La Delivrance was put up in North London, which was nicknamed Gertrude.

42 Winnie the Pooh: that famous street in Manhattan

43 Down on your knees

44 Droopy Drawers(sagging trousers): All the fours

51 Tweak of the thumb

52 Weeks in a year: Danny la Rue(drag entertainer: also used for other numbers)

53 Stuck in the tree: here comes Herbie(53 is the racing no of Herbie the VW beetle.Players may reply'Beep Beep!)

54 Clean the floor:House with a bamboo door

62 Tickety Boo: Turn on the Screw

69 The same both ways: Anyway up: your place or mine: meal for two

72 A crutch and a duck: Par for the course:Danny la Rue

73 Crutch and a flea: Queen Bee

76 Trombones:popular marching song: was she worth it?( pre-decimal cost of a wedding licence was 7 shillings and sixpence). Players shout back ' Every penny! '

81 Fat lady and a little wee:Stop and run

82 Fat lady with a duck:Straight on through

83 Fat lady with a flea:Time for tea

87 Fat lady with a crutch: Torquay in Devon

89 Nearly there: All but one

90 Top of the Shop: Top of the House:Blind ninety:End of the line
< PrevNext >