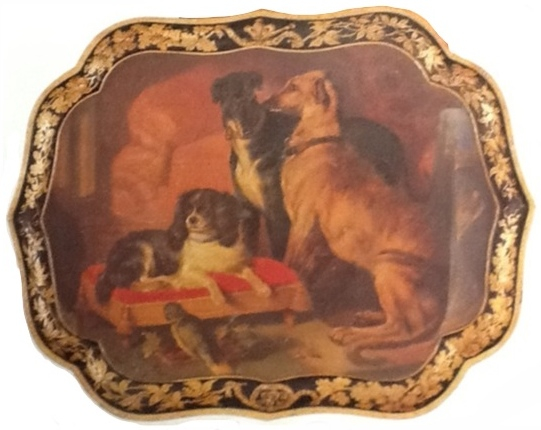 Queen Victoria's first dog was a spaniel called Dash.
When she was eleven she was painted with him beside her.
As a young Queen she wrote in her diary: "I dressed dear sweet little Dash for the second time after dinner in a scarlet jacket and blue trousers."
And later, in 1839: "I sent for Dashy, whom Lord Melbourne accused of having crooked legs, which I wouldn't allow!
We put him on the table and he was very much petted and admired by Lord M., who was so funny about him!
We gave him tea and Lord M said,"I wonder if lapping is a pleasant sensation," for that is something we had never felt."

In her "Leaves from the Highlands", when she was an old lady, she wrote: "My favourite collie Noble is always downstairs when we take our meals, and was so good, Brown making him lie on a chair or couch, and he never attempted to come down without permission, and even held a piece of cake in his mouth without eating it, till told he might." 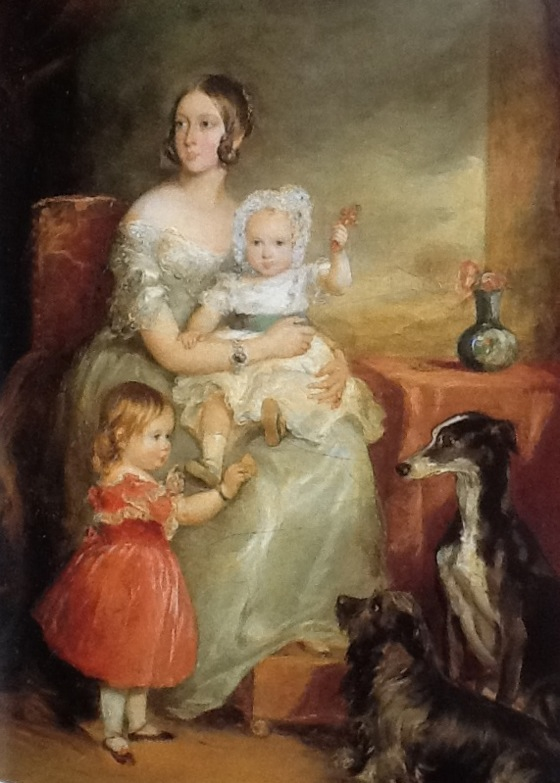 Queen Victoria and her beloved consort, Prince Albert, both showed great devotion to their dogs, and in fact helped to change the people's perception of how dogs should be treated.
Before the Victorian period the British were not known as animal-lovers; cock-fighting, dancing bears and dog-fights were in fact considered excellent entertainment.
But during her reign the Queen intervened more than once to speed legislation drawn up to improve the animal lot.
She refused to have her dogs be mutilated by having their tails docked, and kept her animals in comparative luxury. 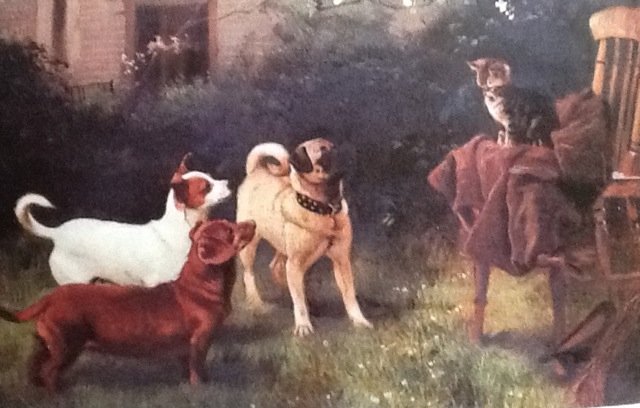 She and Albert introduced a breeding programme, and owned a wide variety of special breeds.
Specimens of her favourite dogs were coveted by royal princes all over the globe.
By the 1840s they owned thirty-three animals; towards the end of her reign this had risen to eighty-eight. 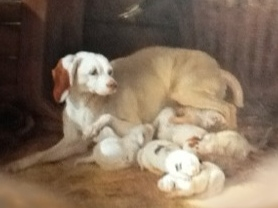 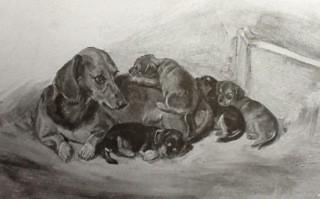 There were far too many to be kept in the royal palaces, and the architect Henry Ashton was appointed to design kennels for the royal surplus.
The kennel-master was a very important member of the staff.
Victoria, unlike most Royals, did not exclusively house hunting dogs in her kennels.
All the royal dogs, regardless of size, were treated as pets, and were regularly visited by the Queen.
Among others, she kept dachshunds,a Pekinese, Pomeranians,greyhounds and a rare Tibetan mastiff. 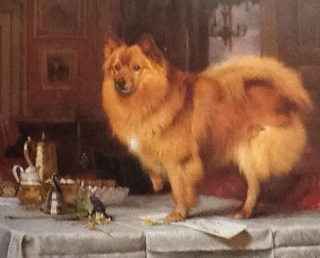 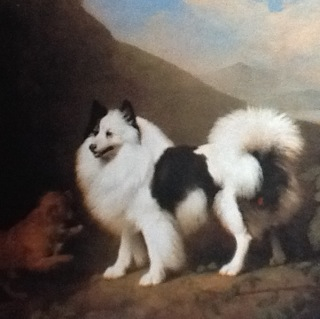 The wife of the Prussian ambassador to England,1841 to 1854, wrote to her daughter about the kennels;

" I had a nice walk in the park between 11 and 12, and got Grandpapa to go with me, as far as the place where the Queen's dogs live.
There is a pretty cottage with a garden, where a nice Highland woman lives,with her five children, and she let us pass through a succession of yards, where the dogs were put either together or separate, according as they liked each other's company.
There were beautiful dogs of all kinds, but the curiosities were, a pug all black, which I thought handsomer than the common ones, just as, if I must see a Negro,I would rather he was black than only dingy.(I apologise for her comment,but it was made in 1854).
Then there was a Chinese dog with a sky-blue tongue,and his coat all chocolate-brown, from nose to tail,and to the very ends of his paws--with a droll, sly countenance--and a Cashmere dog,as big as a young lion,and with just such legs and paws--very good-natured to those he knows, but terrible to meet as an enemy:--also an Esquimaux dog, who was one bush of hair,with sly fox-eyes and sharp nose peeping out--who must find himself too warm in this country.
The dogs were pleased to be noticed,and I should have liked to have sat down amongst them, and tried to draw them--the places were as sweet and clean as your chicken-yard." 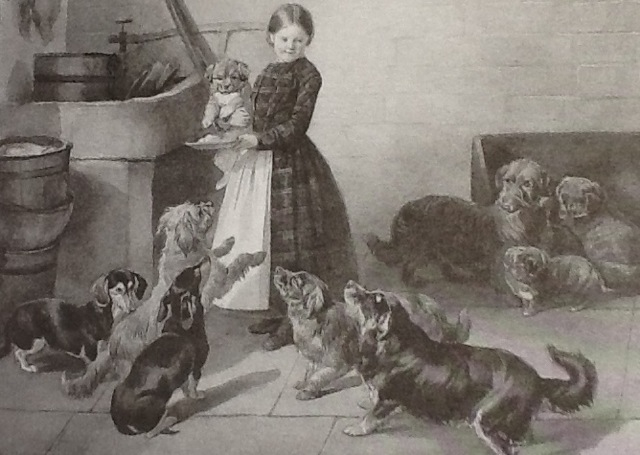 The kennels were the high-point of state visits, and in1855 Victoria described in her diary how she visited the dogs with Napoleon III and the Empress Eugenie.
Even in 1897, at the end of her reign,there was an article in Country Life which described how the 'aged queen' regularly stopped in her pony snd trap at the kennel door and had her favourites handed up to her to be petted, or watched little groups of them playing together.
There are many paintings and drawings of Victoria's dogs.
Sir Edwin Landseer was the favourite artist of the royal family; when he died they possessed no fewer than 39 of his oils,16 chalk drawings, 2 frescoes and many sketches.
It was for his service as an artist that he was knighted, and he was given a State funeral in St. Paul's Cathedral.
I am sure you know that the lions in Trafalgar Square were designed by him.
A number of other artists were employed to draw the dogs, and the paintings were hung in the kennels or, if of favourite animals, in one of the palaces.
They were often given for birthdays or Christmas within the family.
This is little Princess Alice being watched over by one of the pets....
You can see him, with Prince Albert's Eos, in the first portrait. 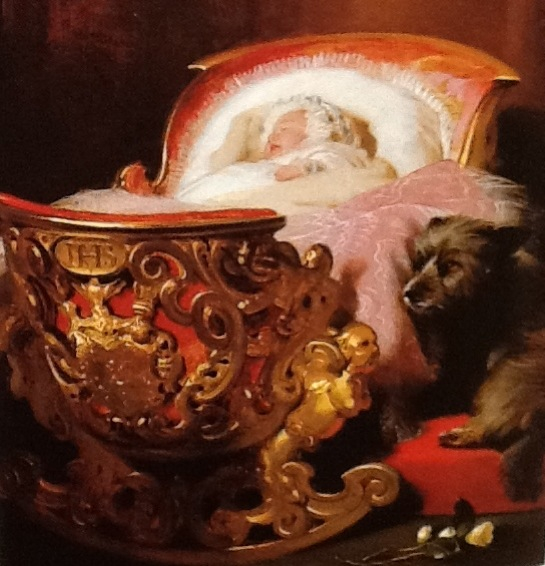 It was in Victoria's reign that the royal cult of animal death in Britain developed.
In her journals she writes of her devastation when her pets died.
When Dash died in 1840 he was buried with a tombstone on which the inscription urged the reader to follow the example set by the little dog during his short life.
When Eos, Albert's favourite greyhound, died in 1844, Landseer's portrait was used as a model for the life-size bronze statue which stands on the slopes at Windsor. 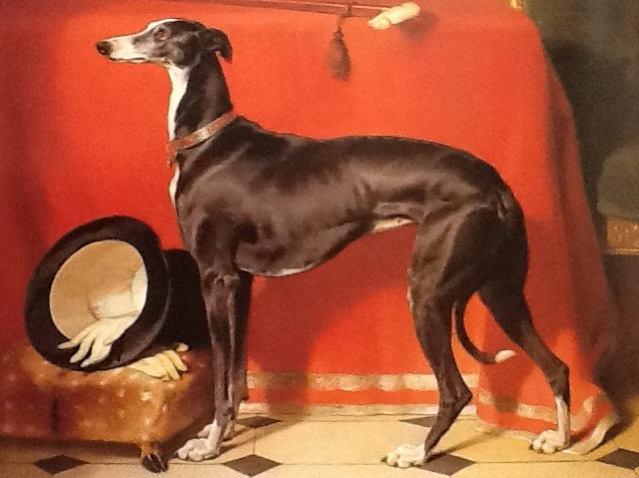 Many of Victoria's pets were buried by the lake at Frogmore,and most of them had statues above them, modelled from paintings.
James Reid, her doctor, who was present at the death of Noble,her favourite collie, has recorded her devastation:
"Her Majesty was much upset,and cried a great deal, said she was so fond of those that were gone, and that everything in the world comes to an end: that she believes dogs have souls and a future life: and she could not bear to gomtomsee his body, though she would have liked to kiss hjs head.
Kingsley and many people, she says, believe dogs have souls.
I had to increase the strength of her sleeping draught, and only left her at 12.45 a.m. when she gave me the accompanying note of instructions for his burial:
'I just write down what was done in the case of the Prince's beloved old dog, Eos, who died 43 years ago and is buried in the slopes in a small bricked grave under her statue at the top of the slopes at Windsor.
The grave was bricked, and coins were placed in the bag in which the dear dog (who was only ten years old) was placed.
I wish the grave to be bricked.
The dear dog to be wrapped up in the box lined with lead and charcoal, placed in it, as well as some coins.
I feel as if I could not bring myself to go and choose the spot.
Dr. Profeit would perhaps suggest it.
I will then tell Mr. Profeit to write to Mr.Boehm to get a repetition of the statue of the dear dog in bronze to be placed over the grave.' 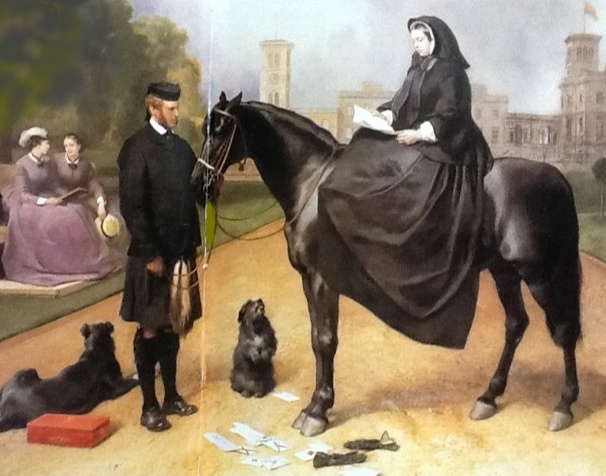 The Duke of Windsor recalled that Victoria "in her craving to immortalize her own private memories and ward off the encroachments of time,had surrounded herself with countless monuments...on the summit of nearly every hilltop within sight of the Castle(Balmoral) was a granite memorial cairn, and as one walked round the grounds, every turn of the path brought one face to face with a statue, a drinking fountain or a granite seat dedicated to the memory of a faithful retainer or even a pet dog."

It must be said that many human beings have felt like Victoria when a much loved dog has died.
In the garden of Newstead Abbey, his family home, the poet Byron built a monument to Boatswain, his Newfoundland dog.
First came an inscription, then some verses.
Both are rightly famous. Here is the inscription. 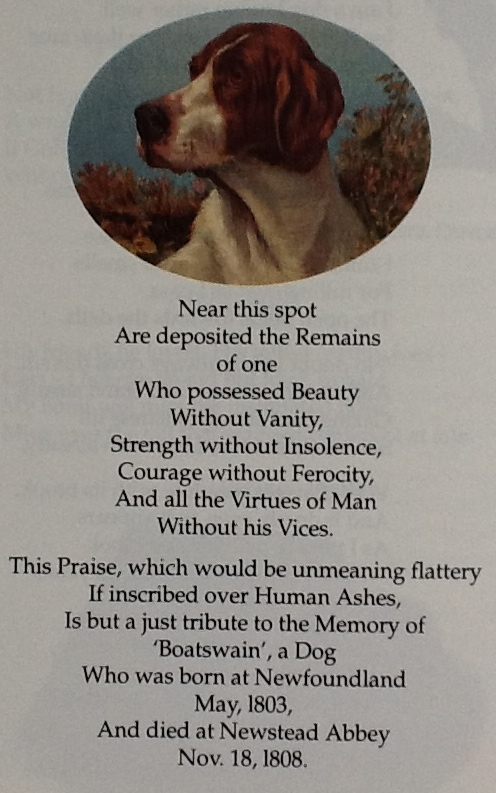 There will be many more stories of loved Royal pets later....
< PrevNext >