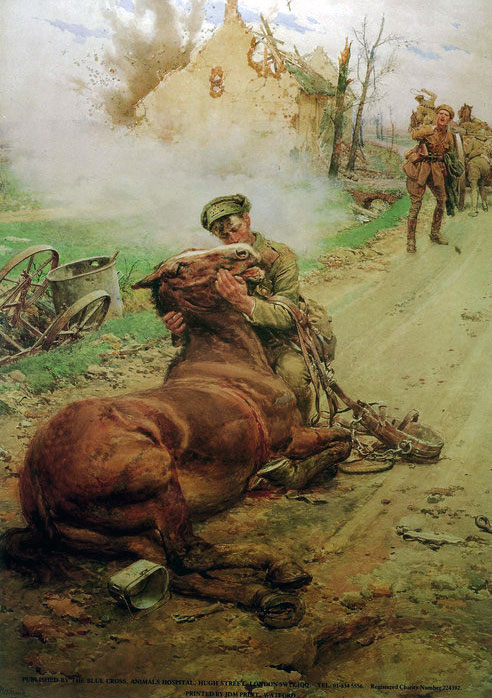 This famous painting, "Goodbye, Old Man" by J. Matania, was commissioned by The Blue Cross in 1916 to raise money in Great Britain to relieve the sufferings of war horses in Europe.

My father had hung a large, heavily foxed print on our kitchen wall, and as a child I would stand on his Windsor chair and stare up at it; the soldier was very much like my Dad, who had been a signaller all through the First World War, and I thought it was so sad that he had to leave his horse behind.
The print was the one thing in the house I wanted when Dad died, and it is on the wall here as I type.

My cousin John sent us the following poem,contributed to the magazine "This England" by William R. Ansell, of Saltdean, Sussex, who wrote:
"Here is a recitation which was one of the many spoken to me by my late grandfather in days of yore, when I was very young (I am now 80).....
Just a story, which so impressed me, of one of our gallants who left his livelihood to go to the Belt of South Africa to fight for his Queen and Country, never to return.
This recitation was, I believe, rendered by Eustace Calthrop, a music-hall star of the 1890's.
That memorable painting,"Goodbye old pal(sic)" which you published earlier, brings it flooding back to my memory."

WHISKER
Only a London bus-horse, that's what he was last year,
When he worked from Highgate Archway to the Strand.
A good run for his collarwork, not difficult to steer,
And at pulling up quite sudden, he was grand.

Some said he was from Suffolk,and was one of Gilbey's strain
But I think he hailed from far across the sea.
A Canadian by the colour of his coat, his kind of tail, and mane,
But they didn't give him no straight pedigree.

Only a London bus-horse,but they picked him for the front,
Without asking him if he would like to go....
When they want a slave who's willing, in a fight to bear the brunt,
They don't give him a chance to answer no!

So they packed off poor old Whisker,and about a hundred more
In an army transport bound for Table Bay
And they say he wasn't seasick on his passage to the war,
But was ready for his breakfast every day.

Only a London bus-horse, but they put him to the guns
And he dragged his load with gameness through the Rand,
But now and then he hoped they'd take some ounces off the tons,
An' he wished as he was trotting down the Strand.

But he never shirked his duty, nor startled at the noise
Of the crackle and the rattle all around
He did just as he was ordered like the bravest of the boys
And with them, under fire, he stood his ground.

Only a London bus-horse,but he did his level best
To save the guns from capture by the foe
Though the lashing from his driver made him snort and raise his crest
Yet he didn't need the whip to make him go.

Only a London bus-horse by the Modder River lay,
A hero unremembered in the strife
Forgotten in the shouting of the loud triumphant strain
Yet he gave his all for England
With his life.

Perhaps this is not the greatest of poems, but it tells of one of the hidden truths of the Boer and First World Wars, that thousands of horses were shipped into the Front Line,facing without choice or comprehension the noise and struggle and danger of a brutal conflict.
Many of them did not return; on the continent, after the war,many thousands were butchered and eaten.

As a little girl, standing on my Dad's chair and looking up at the picture, I always felt so sad: now I feel angry at the injustice and betrayal of it all.
< PrevNext >

#2 tont holt 2013-03-21 13:06
dear audrey
i have just read whisker for the first time and what a wonderful and moving poem i know the soldiers kiss off by heart since i was a boy but this is a new one for me i have a picture of goodbye old man as well on my wall and i am allways looking at it did you write whisker your self it's a wnderfull poem many thanks
tony holt
#1 Guest 2013-01-01 21:15
This comment has been deleted by Administrator
Refresh comments list