You may have looked at the article on Tiny Things?
Here is something extremely interesting!
I heard about Willard Wigan on a morning TV programme, and was immediately anxious to find out more.
As yet I have been unable to locate a serious book about his work.
I hope he will write one soon!
Willard Wigan makes very, very small sculptures.
They are so small they can sit on a pinhead, or fit into the eye of a needle.
Here he is with Rodin's 'The Thinker.'

He has an MBE for his work, and it is worth millions.
The list of collectors of his work includes Prince Charles, John Elton, Mike Tyson and Simon Cowell.
He has put Henry VIII and all his wives, & Snow-White and all the 7 dwarfs,into the eye of a needle.
His works are viewed through a microscope, and he looks through microscopic lenses when sculpting. 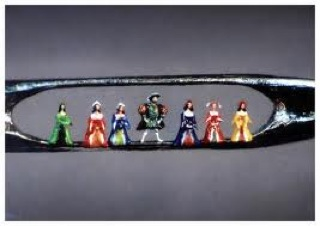 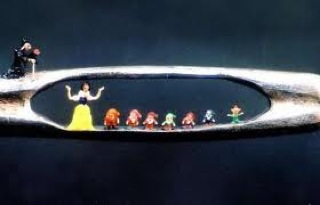 How did this all begin?
Willard was born in 1957.
He was a child with undiagnosed dyslexia.
He was ridiculed at school, and this has affected his attitude to life and work.
He began to make small models at the age of 5, as an escape from the derision of teachers & classmates.
He wanted to create something not visible to the naked eye,to show the world that there was nothing that did not exist, & deduced that if his work could not be seen it could not be criticised. 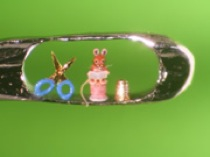 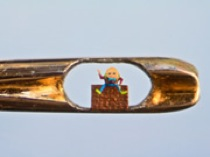 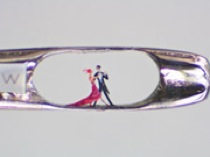 His subjects range from fairytale and fantasy to famous people & architecture.
He has made sculptures of Obama and his family, the Wizard of Oz, and the Mad Hatters Tea Party. 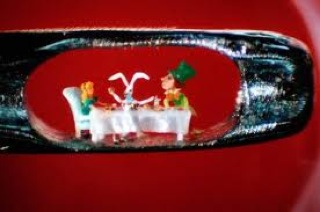 Willard spends up to 18 hours a day at his work.
He has learnt how to slow down his heart so that the delicate movements required are not disturbed.
He uses hand made tools, and the materials used include grains of sand,dust fibres and (for painting) the hair of a dead fly.
He has said that he sometimes uses the tremor of a heartbeat as a jackhammer to chisel a grain of sand.... 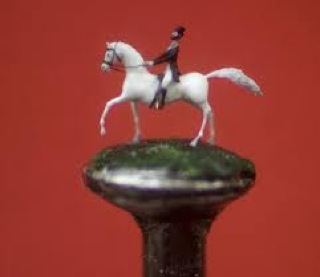 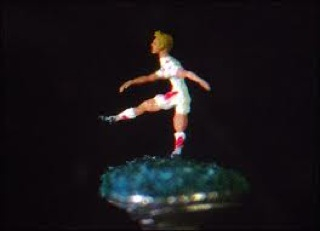 Personally, I think this is not QI, it is VVI !
< PrevNext >