Here are two people with a wonderful gift. 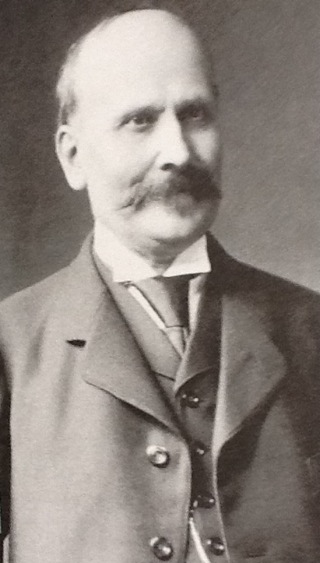 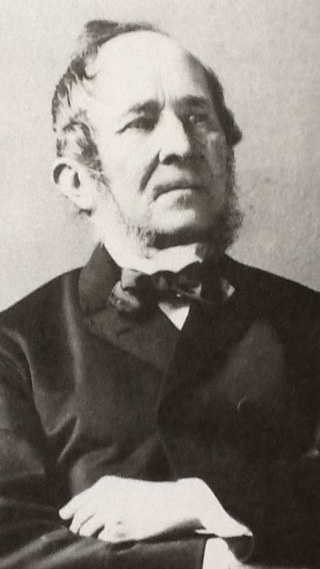 They are Leopold and Rudolph Blaschka.
In the 1850s, in Dresden, they made costume jewellery and glass eyes in their small workshop.
Later they became interested in creating plants and translucent sea-creatures.
During the 1880s they made absolutely exquisite glass models of oceanic invertebrates, and their work was in huge demand for use in universities and other study centres.
Here is an example of their work. 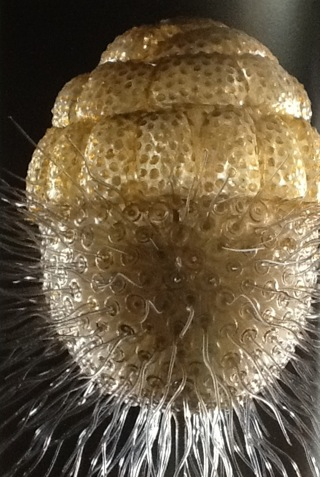 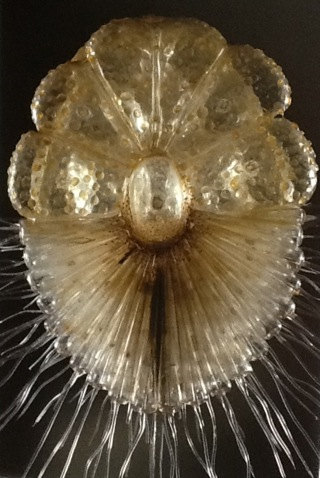 About ten years ago I was in Germany, and went to a Blaschka exhibition, where there was a room, dimly lit, surrounded by large backlit transparencies of these glass creations.
In the next room were a number of the actual models, and then a film showing the real live creatures, moving and turning under the sea.
It was as if the transparencies had come to life!
I went back to the first room and stood there for a long time, gazing at each transparency in turn, wondering how such perfection had been achieved. 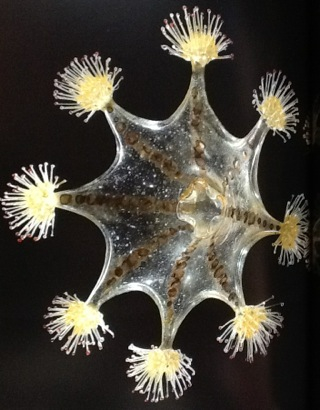 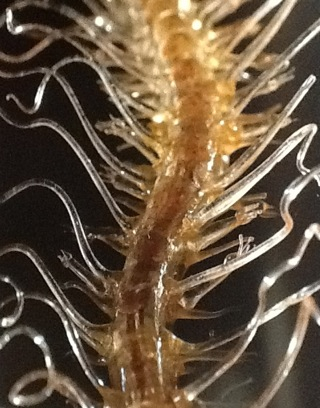 In the film, all the sea-creatures had been shining and translucent, and glass was the best possible material in which to recreate them.
It is liquid when hot, transparent and malleable, and in their models the Blaschkas used its qualities wonderfully well. 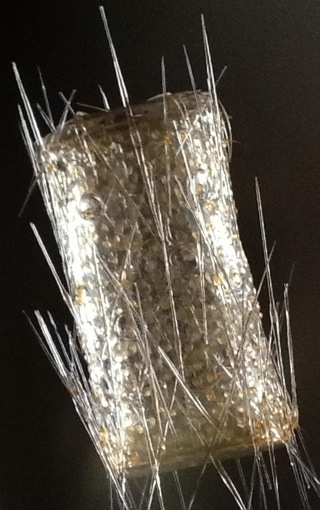 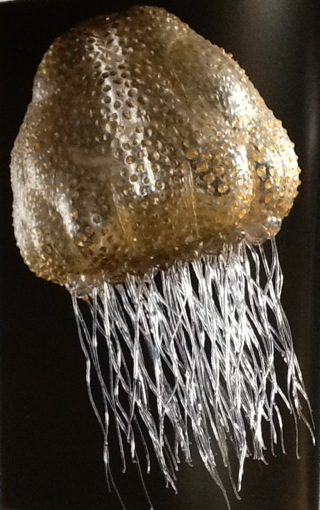 At the time when the Blaschkas were creating these models, there was a growing thirst for scientific knowledge.
Mammals could be photographed, but there was no way of recording life under the sea; the demand for their glass creations, based upon drawings and poorly preserved specimens, grew until by 1888 they catalogued up to 700 different models, and universities and colleges in Great Britain had acquired prized collections. 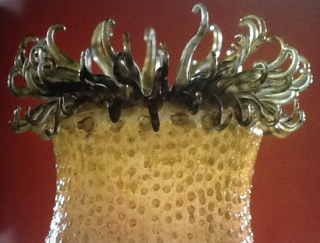 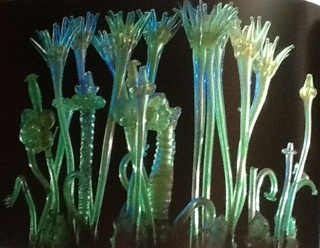 However, developments in underwater photography meant that by the last third of the 20th century the inaccuracies in some of the models (due to reliance upon drawings), and new availability of filmed evidence, meant that the collections were relegated to storage cabinets and forgotten.
Today there is a reawakening of interest in them, and appreciation of their craft and beauty, and the difficulties under which they were created.
The second half of the 19th century was such an exciting time: people wanted to know more and more about the world: universities and museums were set up in every continent, and new Galleries were being stocked for public display.
There was a lack of examples of soft-bodied objects from underwater; it was difficult to preserve them; if they were pickled, their colour faded and transparency was lost.
It was Leopold Blaschka, an expert glassworker, who proposed the idea of recreating them in glass. 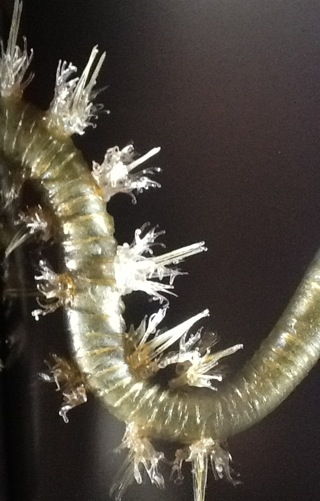 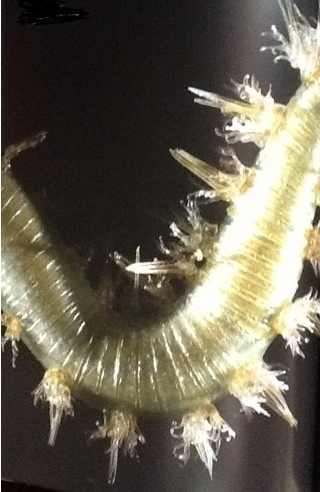 Leopold Blashka was from a very long line of glassworkers.
As far back as the 15th century someone of that name was registered in Prague as an artificer in decorative glass.
Leopold's grandfather owned a sawmill and a glass furnace.
When he was young Leopold showed early aptitude for painting, and it was proposed that he should study Art, but his father wanted him to have a more practical training.
He joined his brother at working with precious metals and cutting gemstones.
Later he began working with his father to learn the family skills of metal and glass-working.
After the death of his first wife Leopold left for America in 1853.
During the voyage the ship was becalmed for two weeks, and he spent time trawling for, and drawing, jellyfish.
This study from life was to help him in his later work. 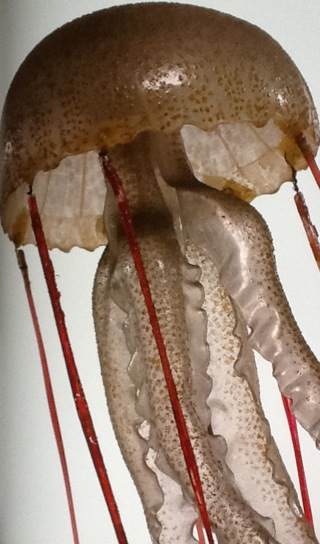 Once settled in America, Leopold married again, and after his son was born in 1857 he began experimenting with making flowers in glass, to demonstrate his skill.
He made a number of models of orchids,which were exhibited: he was then asked to make a set of sea-anemones in glass,and this led to purchases from many museums, and the business was eventually flooded with orders. 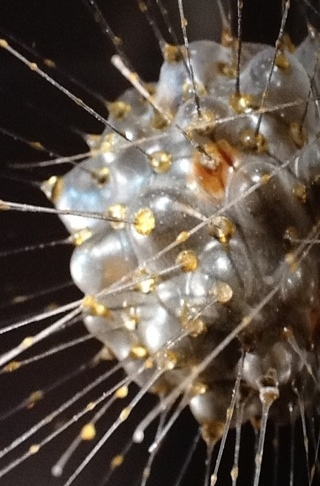 There was always the difficulty of ensuring accuracy.
In 1879 Rudolph went on a field trip to the Adriatic, and seawater aquaria were set up in the studio.
Leopold had called his early models 'ornaments' but gradually, with the access to specimens from all the scientific expeditiond, he became interested in providing study material for the new universities, and found an eager market.
The Blashkas paid great attention to the appearance of their models, often applying a speckled layer of pigment to the inner surface of the glass to convey a jelly-like translucence. 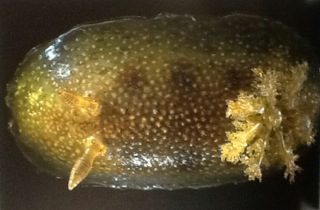 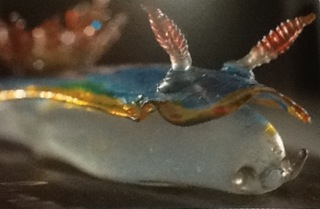 Leopold and Rudolph, overwhelmed with orders for their glass creations, found it difficult to choose between working on plant or animal subjects.
At this time a Professor from Harvard commissioned them on a half-time contract to produce models of plants, and by 1890, with a ten-year contract on offer, work on sea-creatures came to an end.
During the 20th century the jellyfish, seaslugs and sea-anemones, some of them out of date, were put into storage, and it is only now that the technical brilliance and sheer beauty of these works in glass is becoming appreciated. 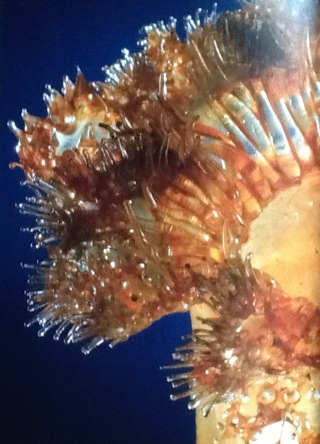 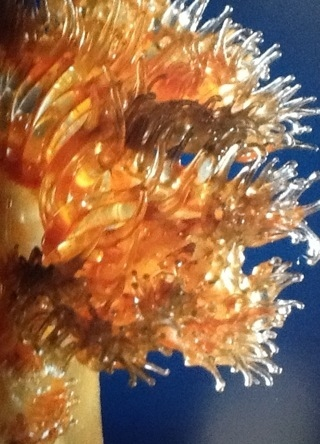 For me, the exhibition in Stuttgart was a never-to-be-forgotten experience; the large, backlit transparencies in that darkened room were a brilliant celebration of the unseen wonders of this amazing world. 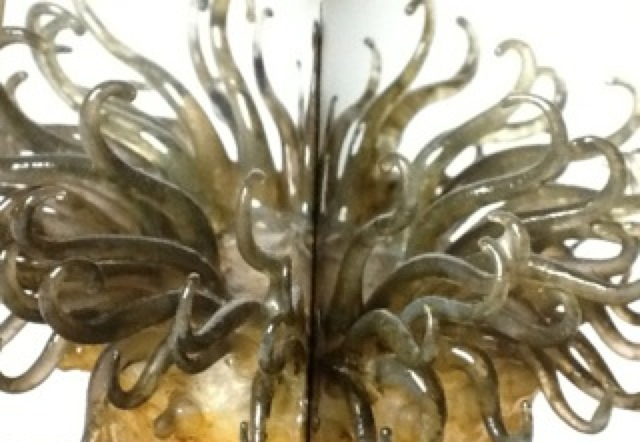