So Fair a House Part 1

A good many years ago I spent a very pleasant 15 days at Bournemouth, a South coast seaside resort with long, clean beaches and a refreshing lack of Blackpool hullabaloo.
The hotel was just across the road from the pier, and I had a neat little room with two advantages: first, there was a sea-view ( if I tilted my head and contorted my body I could catch a glimpse of sea between the buildings ) and second, the trolley with the biscuits and tiny milk-cartons was parked outside my room at mid-morning, so I had a chance to double my allotted two-carton allowance and have tea in the evenings. (I never took biscuits!) 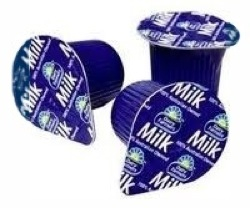 I saw a play at the end of the pier with Roy Hudd in it, I remember, and the second version of Planet of the Apes, and made friends with my regular waitress, who was missing her home in Slovakia and who understood that I liked well-grilled toast ( I dont enjoy full English breakfasts, and only ask for toast,well-done, with butter and marmalade.
Hotel toast is so often just warm bread.) 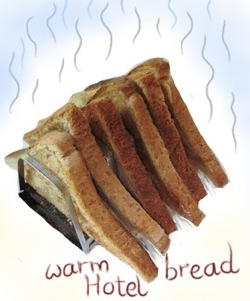 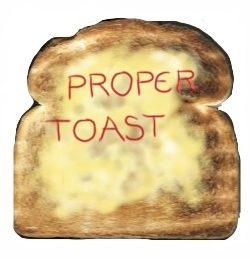 She was unnecessarily grateful when I gave her a thankyou card and well-deserved tip as I left. She was really homesick, and hotel staff often work long, poorly-paid hours with little appreciation. The walk into the shopping area was through a park planted with tall pine-trees, and the squirrels were extraordinarily tame. I would take a bag of nuts in my pocket and they would follow me as I took the winding path through the trees. 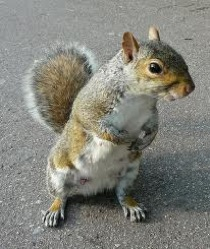 There were excellent and varied eating-places, and some interesting antique shops and market stalls, where I found a Victorian set of bone dominoes which I still use. 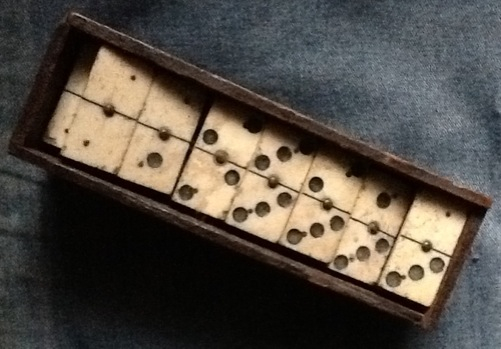 If I took the coastal path, which was quite steep,I could enjoy the salty breezes and the stretch of creamy sand, which was cleaned and swept every night.
It was on one of these walks that I came across the Russell-Cotes Art Gallery and Museum, and from that day on was a regular visitor.
The little history-book about the building is called,'So Fair a House,' and I still read it and enjoy the memories it holds for me. 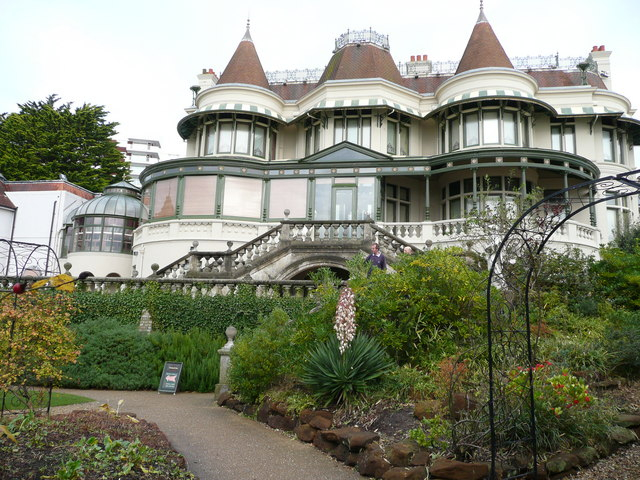 As I first walked along the path, enjoying the fresh sea air and the sunshine and not looking for much more, I glanced to my left and there it was!
On the brow of the hill, with a panoramic view of the creamy sands and deep blue sea, stood a Victorian building built in the most romantic style, with turrets and towers and decorative datails in abundance.
In the garden were rose-covered arches, winding paths,urns and statues.
I had to find out more about this unexpected treasure.
I had not read about it in the brochures, and none of the hotel folk had mentioned it.
That was my first encounter with the Russell-Cotes Art Gallery and Museum, and it was not to be my last.
Almost every day of the rest of my holiday I took the coastal path and spent an hour or two,or three, inside that fairytale palace,where incidentally the cafe provides the best ever lemon drizzle cake!
What I had seen was the seaview side of the Museum complex.
The entrance was behind the building, in the street; I just had to turn left, and there it was. 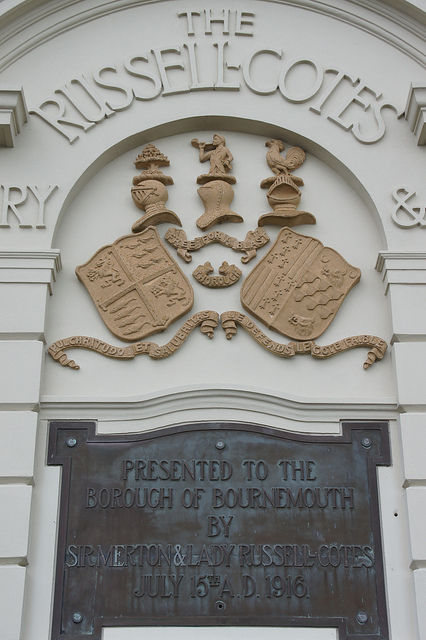 The founders of the Museum were Merton Russell-Cotes and Annie Nelson Clark, both born in 1835.
Merton met Annie in 1854 through her father, who was son of Scotland's largest cotton-spinner and introduced Merton to Glasgow literary and painting circles.
Both families were established and wealthy, and interested in the arts.
Annie was herself a talented musician.
Merton was sent for a long sea voyage in 1855 because of ill health ( it is not clear whether this was due to mental strain or congestion of the lung, as he claimed) and worked with a company of woollen manufacturers on his return, but kept in touch with Annie and in 1860 they were married.
They set up home in Dublin and had five children, two dying at an early age. 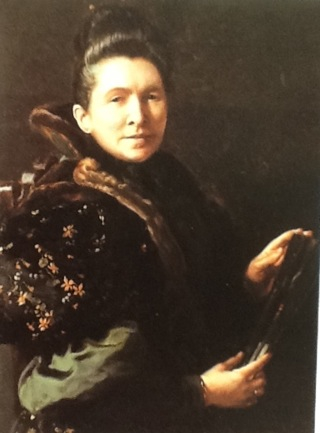 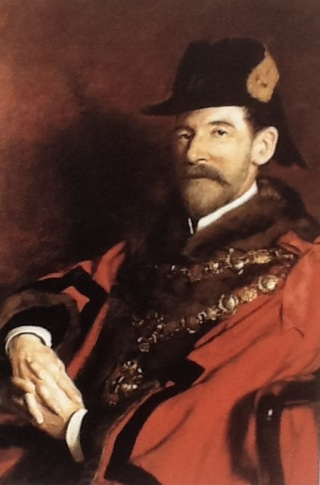 Merton was always prone to ill health, suffering badly from bronchitis; after one very serious attack, it was recommended that he should spend a spring in the South of England,where the climate might suit his health, and even consider taking up residence there permanently.
Although this would mean a move for the whole family, eventually the decision was made, and for a while Merton and Annie stayed at the Bath Hotel.
Merton's health greatly improved, and they both began to feel at home in what was then a small,comparatively unknown seaside resort.
They completed purchase of the hotel on Christmas Day, 1876, and together set out to extend and refurbish it.
Here is an old print of the Bath Hotel. 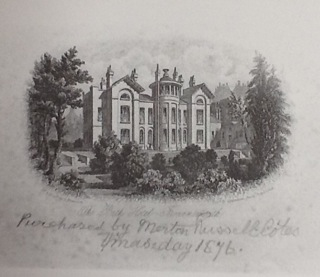 This was the beginning of many years of development of the hotel site,and involvement in the local politics and social life of the little town.
The family grew and prospered,and Merton was nominated to the Bournemouth Board of Improvement Commissioners in 1882. 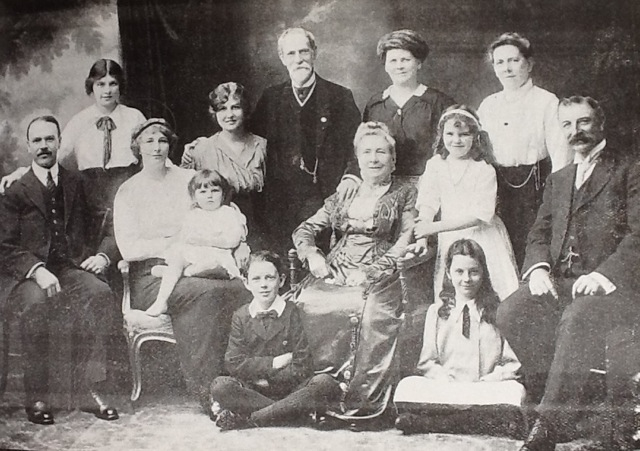 During the ensuing decade he set out to promote the image of the hotel as a high-class, sophisticated residence for visitors.
In particular he purchased paintings and sculpture which were displayed there; in 1891 The Black and White Magazine reported that the value of art works in the hotel was £300,000.
Merton made sure that his name and that of the hotel were kept constantly in the local press.
Meanwhile the various collections continued to increase. 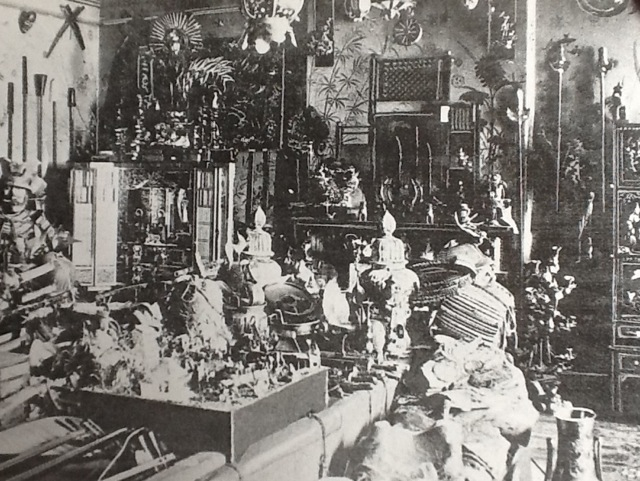 The Russell-Coteses were able to indulge an interest in foreign travel,encouraged by the need for Merton to be in a warm climate because of his continued ill-health.
In 1884 they went to Australia, New Zealand and Hawaii,and on the return journey spent time in Tokyo.
They filled over a hundred cases with decorative art works, and developed a room in the hotel devoted to Japanese artefacts,even employing a resident artist to decorate and arrange it.
They next visited the West Indies and the United States,and added to their collections.
The Art Journal reported on the couple's sitting-room, crammed with specimens, in 1895: "Here the best of his small treasures are brought together. His cabinets of china, English, Oriental and Dresden are considerable, and sculpture, always so difficult to place has an honoured position amongst the other arts.
Scarce an inch of wall space can be seen anywhere." 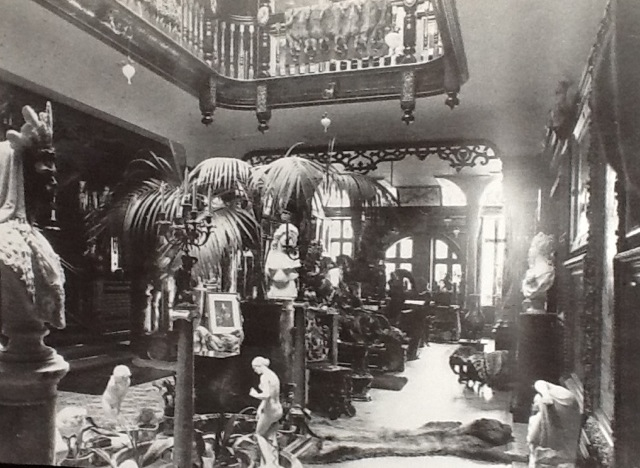 Merton was elected Mayor of Bournemouth for 1894/5, and opened the town's first libraries, giving banquets to celebrate the occasions.
By now his art works and artefacts were attracting national attention.
He was able to use his prestige and influence to stop the council building shops and houses along the cliffs.
He dreamed of adding galleries and a large house, Cliff Hall, to the hotel site, thus making a complex of buildings which would house and exhibit his magnificent collections.
They had meantime travelled extensively in Egypt, the Mediterranean, Scandinavia and Russia, adding significally to the 'Museum' treasury.
When the undercliff drive and promenade were opened in 1907, Merton and Annie were in possession of a premier location on the East Cliff.
They hosted a lunch to celebrate the opening, and announced that they intended "to present Bournemouth with the collection of paintings and other works of art, curiosities etc., which had been collected from all parts of the world, at the same time asking the town's acceptance of their residence, East Cliff Hall, where these valuable works are at present housed."

Merton and Annie spent the rest of their lives on this project,and Cliff Hall became the house at the heart of today's Russell-Cotes Gallery and Museum. 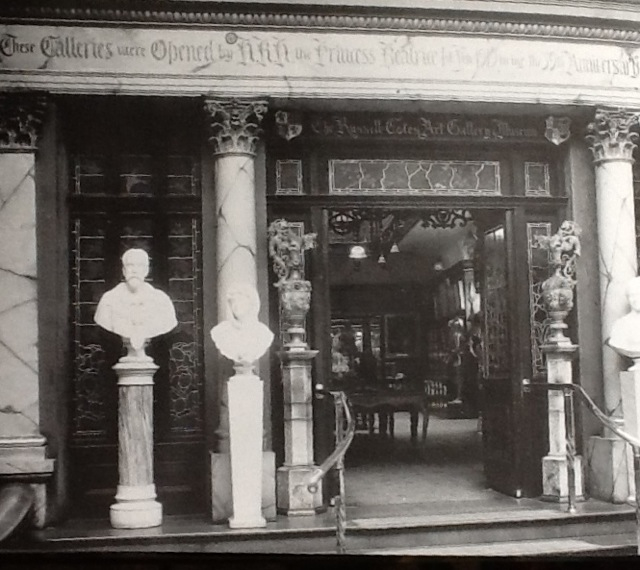 It has taken quite a long time to reach this point, the actual design and development of what is a truly beautiful building,decorated and preserved in mid/late Victorian style and filled to bursting with art works and artefacts from all over the world.
The Victorians sought out every kind of treasure and carried it home: this Museum reflects, as no other, the attitudes of the Imperialists of the period. 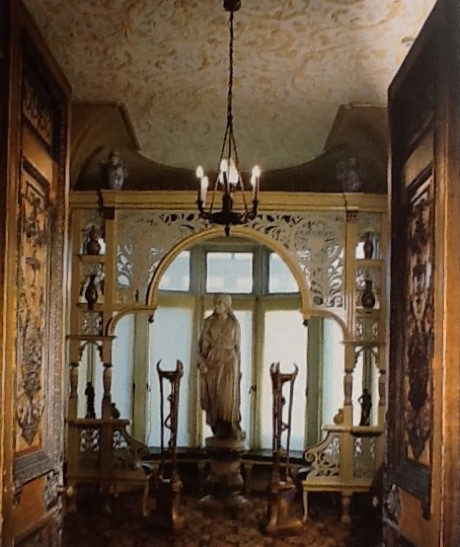 In the second article I shall show you some of the decorative details of the building, and selected artefacts and paintings. 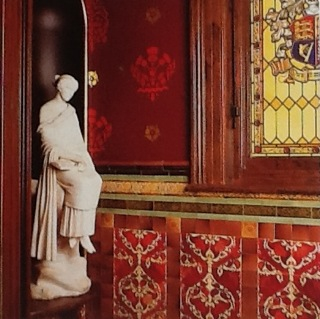 I hope you look forward to going in with me!
< PrevNext >