I hope you enjoyed the first article about some of our discoveries.
Here I hope to write about how fossils are made,and what they looked like as living creatures.
The name FOSSIL comes from the Latin Fossilis, from the verb Fodere, to dig.
There are a number of ways in which fossils are made.

1 Dessication, or drying out (as in dessicated coconut.)
This happens in hot,dry conditions, when the flesh dries on old bones.
I have two examples, both given to me by children; a seahorse and a frog. 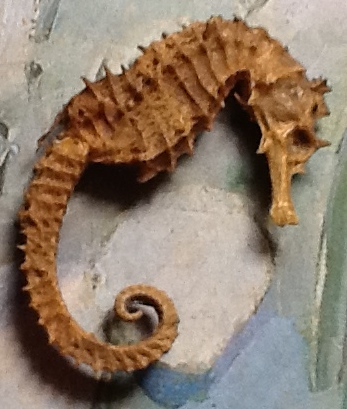 Both were found in hot, dry sand. 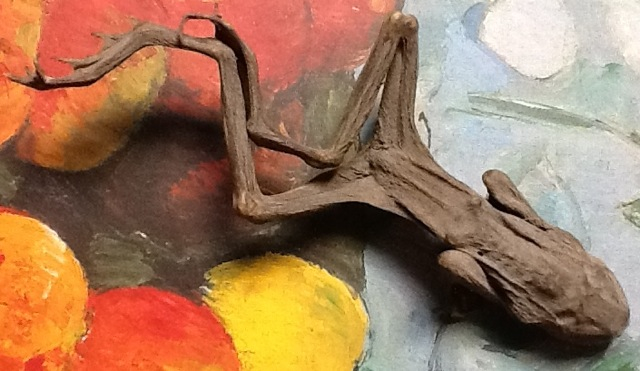 2 Entombment in ancient ice.
During the nineteenth century the perfectly preserved bodies of Mammoths were found in Siberia.
Obviously these finds deteriorate unless kept frozen!

3 Burial over many thousands of years; underwater fossils are the most successful, because predators and weathering are very destructive.
Once buried, animal remains are relatively safe.
The soft, fleshy parts of an organism are very often destroyed, and the reconstructions of extinct creatures are based upon comparison with living organisms with similar anatomic structures.

4 Trace fossils -- footprints, burrows, internal casts -- can be very enlightening.
Usually it is the hard parts of an animal which survive; sometimes even pigment survives.
In exceptional cases, when burial is rapid, details of scales, feathers, leaves and bark, and even of soft body parts, have been uncovered, but shells,teeth and bones are most commonly found.
In many cases, over thousands of years the minerals that make up the hard body parts are replaced by other minerals -- quartz or iron, for example.
In the next picture a belemnite fossil has been transformed, over many thousands of years, into opalescent stone.

In many sandstones the shell of a mollusc can be dissolved away, leaving a perfect cast of the soft body, even including muscle attachments.
I was given this excellent example by my headmistress at Plashet School in East Ham. 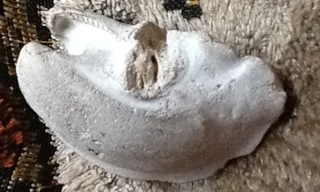 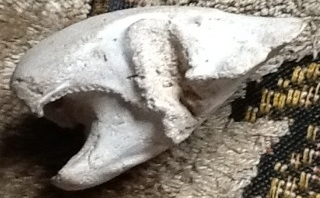 It is a perfect mould of a Jurassic bivalve from Dorset, and came from the Portland stone which was used in facing slabs for the new building.
In the entrance hall, when the school was first opened, was a huge ammonite, almost six feet in diameter, which had been uncovered whilst quarrying. 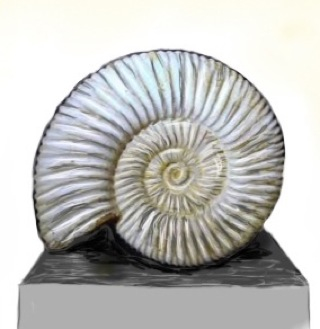 One of the commonest fossils found on the Dorset coast is the ammonite.
Although this creature is now extinct, because its shell- structure is very similar to the pearly Nautilus scientists have concluded that its soft parts would have been similar, and classify it as a cephalopod (an animal in which head and feet are together). 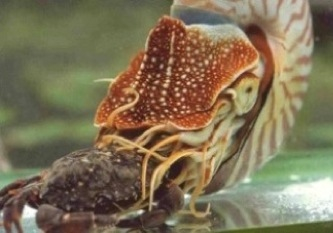 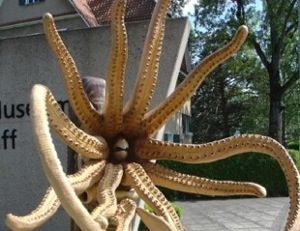 The Nautilus in the picture is eating a crab; its mouth is in the centre of a number of limbs.
Because soft parts of extinct creatures are not often found, the artists' impressions are in fact not actual evidence of reality; the model in the adjacent picture is outside Stuttgart Museum, and as you can see the 'arms' or 'legs' are shown as very much longer than those of the Nautilus.
In the following picture you can see another artist's reconstruction of an ammonite. 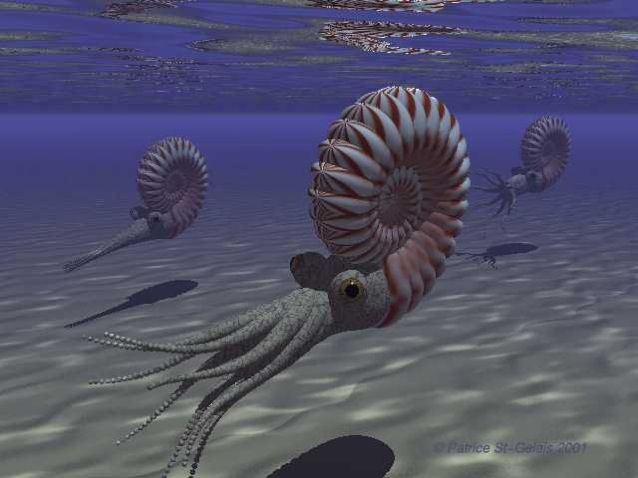 Because soft parts of belemnites have been found, the drawings of them are probably more accurate.
The pointed 'slate-pencil' fossil parts were at the end of the creature and acted as a balance, and movement through the water was by water-jets, rather like the squids and cuttlefish of today.
It is thought that the 'arms' did not have suckers. Here are two interpretations of belemnites. 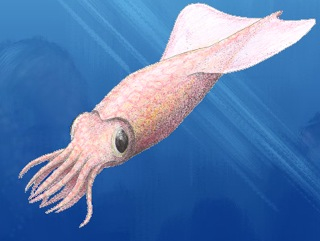 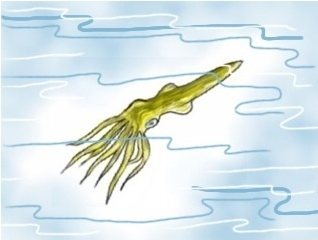 It is very important to remember that the models of dinosaurs you will find in Museums, although very carefully researched, are not absolutely, certainly correct, and the noises we hear on films like Jurassic Park are not based on fact.
Imagination and probability have to play some part in all reconstructions.
It is just possible that the blood we see shed in those dramatic fights was not bright red, but yellow or green!
A great deal can be deduced by studying bones, but mistakes can be made.
It has been known, when fossil remains were few, for assumptions to have been incorrect.
The dinosaur models created for Alexandra Palace after the Great Exhibition (see 'Dinosaurs in the Park') are now considered far from accurate. 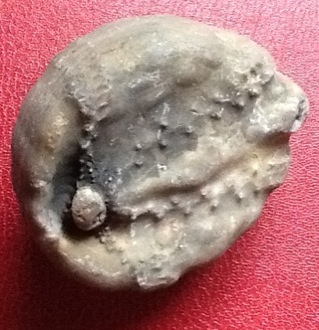 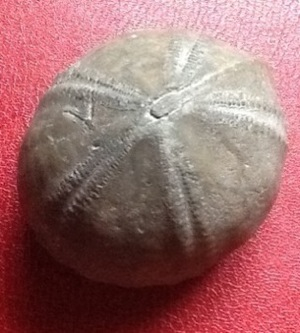 Fossils are only of real value to scientists if they have 'provenance' -- in other words, if there is a proper record of where they were found.
Although the last pictures are of a very good internal cast of a large sea-urchin, because I bought it in an antique shop in Norfolk there are no real clues about its geological date or the circumstances of its preservation.
< PrevNext >