I was lucky enough, some years ago, to visit the remarkable Mont Saint - Michel in Normandy.
Ever since our early camping days in the West Country, when I first saw St. Michael's Mount, its 'little brother' off the Cornish coast, I had always wanted to see the magical rock rising out of the sandflats, with the mediaeval town at its base and the Abbey at its peak,topped by a golden statue of St. Michael.
The only problem was to be my lack of mobility, and indeed I did not manage to match the challenge, although it must be said I tried.
I did reach the final steep rise to the Abbey, and the views were all I could have wished; some of the photographs my daughter took are the most beautiful In my collection. 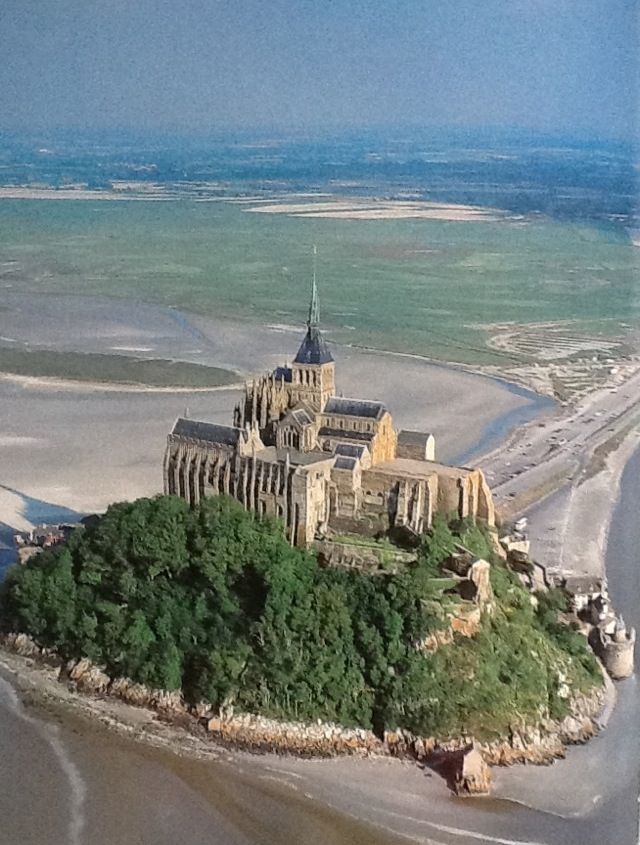 The legends about the origin of the Mount are many and varied.
It is said that in early days the land was forested, until the sea gradually engulfed it.
Certainly remains of trees, buried in the sands, have been found.
The story goes that a huge tidal wave completely covered the area, at the exact moment when, at the start of the 8th.century, Bishop Aubert dedicated the Mount to Saint Michael.
The Mount was left isolated, as it is today.
It is a fact that the difference between high and low tide in the Bay of Mont Saint-Michel results in tidal reaches of more than 12 metres, the widest in the world.
The sea comes in over a dozen miles in a few hours, as fast as a galloping horse, and there are dangerous pockets of quicksand. 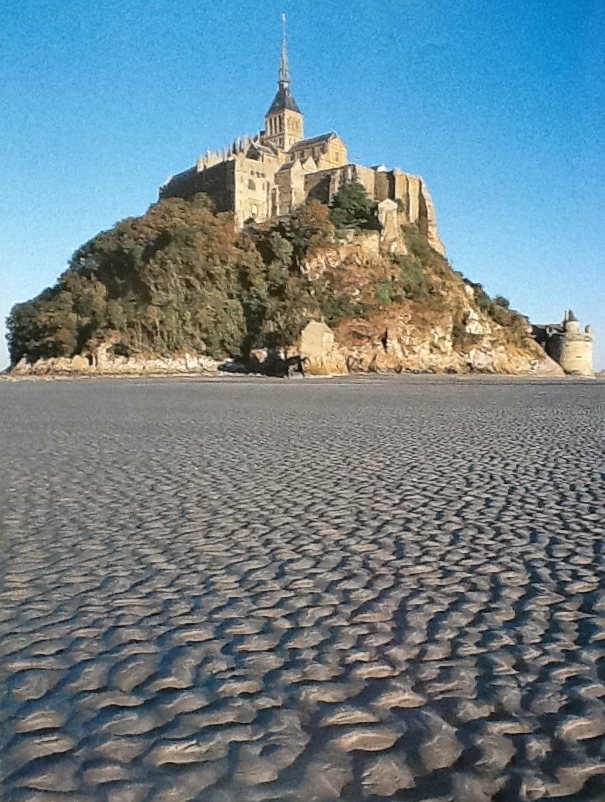 When Christianity began to replace the Gods of the declining Roman Empire, the Mount was used by hermits,trying to escape the world,who lived in poverty there.
Christians settled around the bay, and fishermen would provide food for the solitary inhabitants.
At the same time the growing church was becoming formally organised and the Bishops encouraged the faithful to emulate exceptional men and women, the Saints.
Another legend is that in 708 Aubert, Bishop of Avranches, was visited by Saint Michael in a dream and ordered to turn the Mount into a shrine to him.
There are many, many stories of miracles and wonders performed in this period; suffice it to say that, as time went by, the rock became known as Mont Saint- Michel and monks were sent there to live in community and pray for the world. 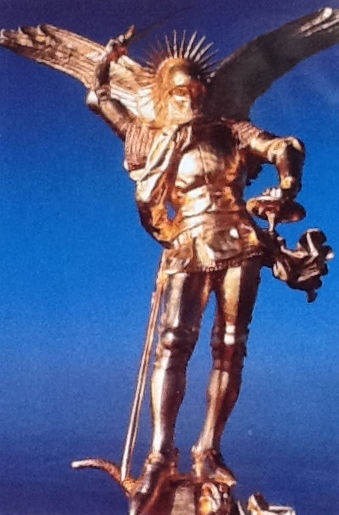 The abbey, rising high above the flat sands, is topped by a shining golden statue of the Archangel, and like a church steeple in the English countryside lifts our thoughts above our daily struggles.

It truly is a powerful symbol.

THE MONKS
The first building was solid and four- square, not yet the fairy- tale turreted palace we see today.
The work of the monks was to pray for all men.
Their day was divided into eight canonical hours;
Matins, at daybreak, Lauds, Prime, Terce, Sext at midday and Nones, Vespers and Compline at nightfall.
(When I was at College we had a Compline service every evening, with plainsong,and it was a peaceful and beautiful end to the day.)

THE BUILDINGS GROW AND CHANGE
Over the centuries, many changes and additions were made.
Fortifications were added after the Hundred Years' War, in the 16th century the abbey fell into ruin, Louis XI used the building as a prison, and even after the French Revolution the Abbey was nothing but a gloomy gaol.
The monks had disappeared.

RESURRECTION
During the 19th century the Victorian writers and Romantics rediscovered the abbey, and attempts were made to restore the buildings.
In 1874 the Mount became, officially, a historic monument. 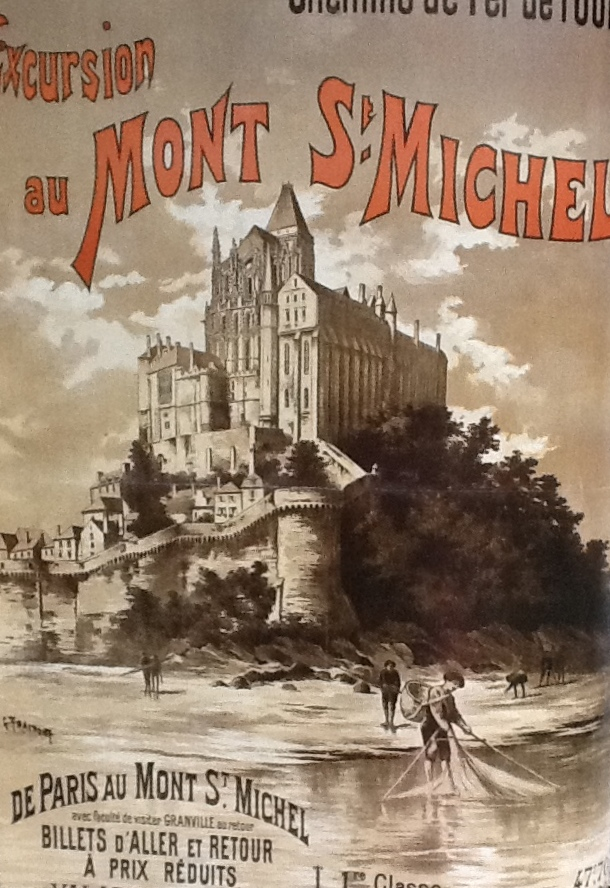 In 1966, after the festivities celebrating the abbey's one thousandth anniversary, it was taken over by a Benedictine order.
In 2001 the Jerusalem Monastic Fraternity were asked to take up the work 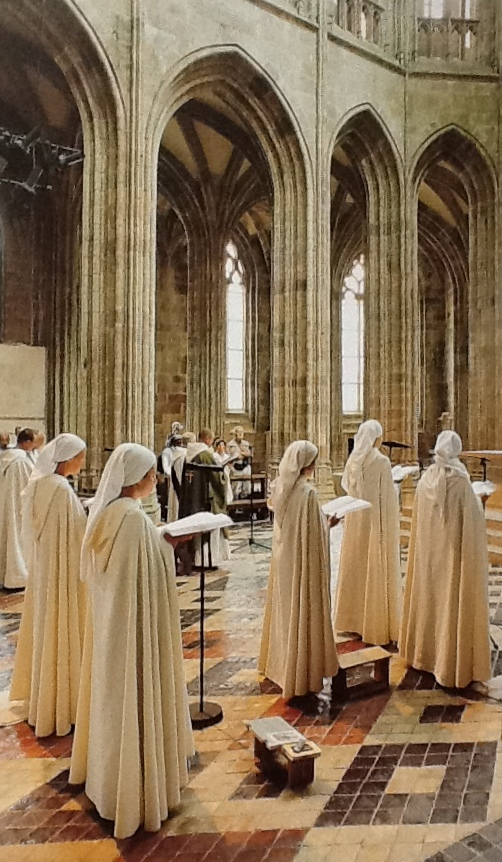 A community of nuns now work and serve the citizens, welcome visitors,and worship and pray in the Abbey.
It has reconnected to its spiritual past. 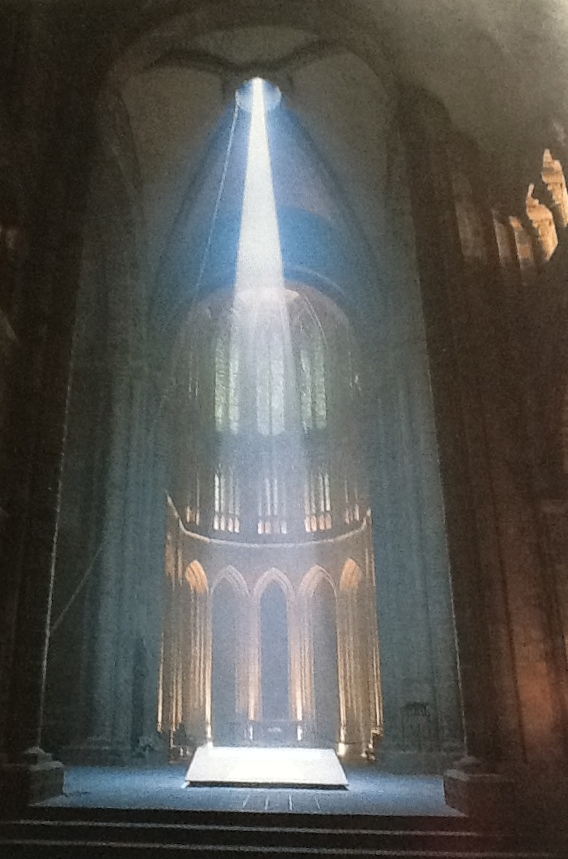 We spent a magical day at the Mount.
At the base is a mediaeval town, with a narrow,steeply stepped street, crammed on either side by little souvenir shops and eating-places. 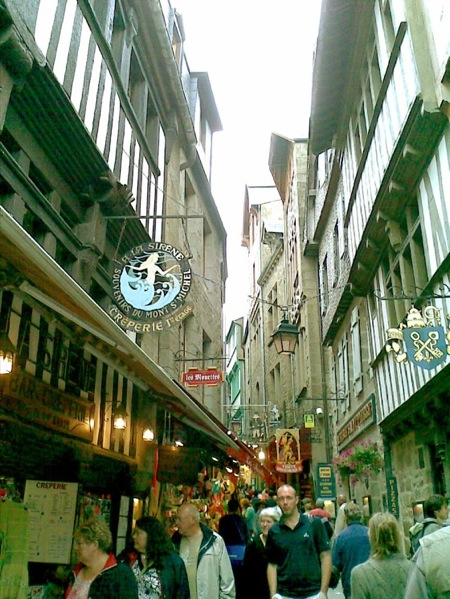 There are old postcards of the same street.
Here is an interesting example. 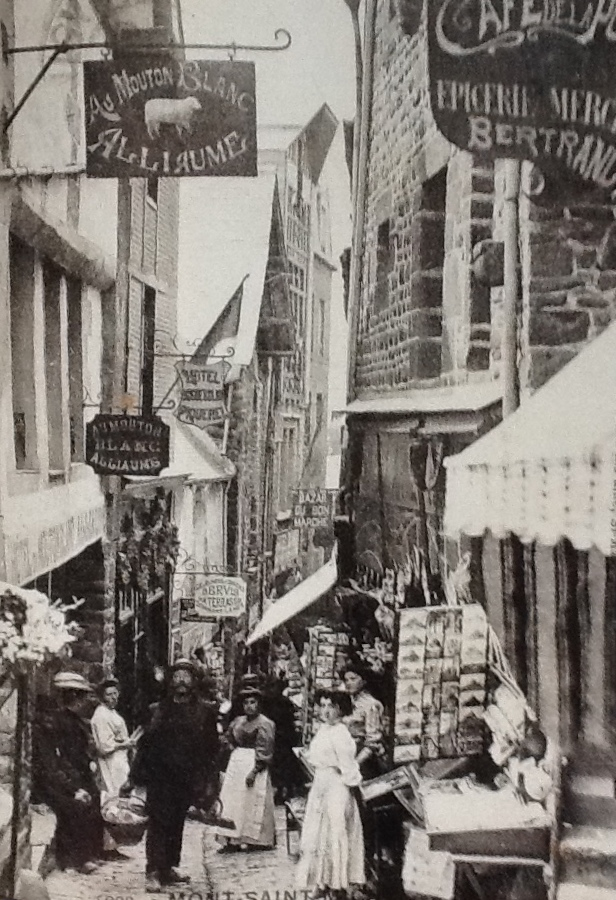 Hundreds of visitors pass up and down; there is no rush, no pushing or shouting, just a feeling of quiet excitement.
I will admit I struggled a bit, but we kept going until the decision had to be made that I would not be able to get into the Abbey, and the others went on and up.
I was still high up, and the views were amazing. 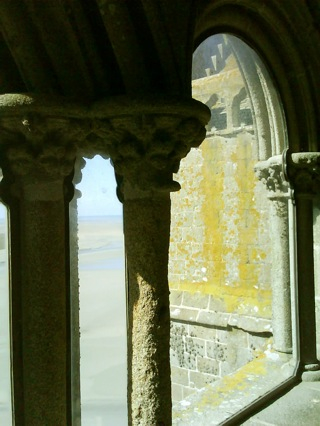 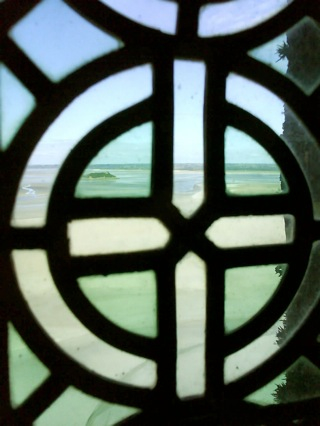 The warm salt air blowing over the sandflats far beneath, the tiny figures of people below me, and the ancient tiles on the mediaeval rooftops all kept me interested and occupied until my friends returned to tell me about all they had seen and learned. 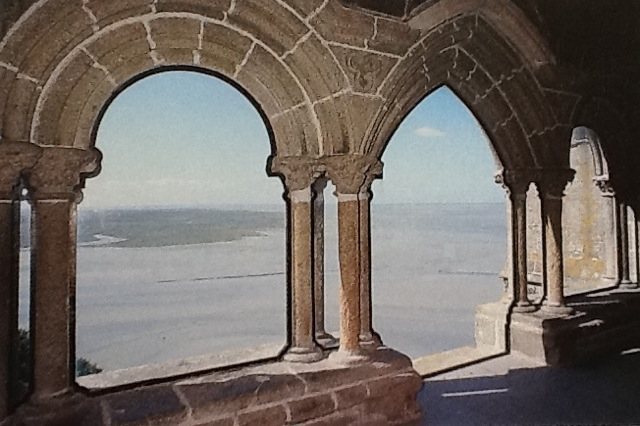 Later I was able to share their experiences through some of the photographs Mary had taken,and now I can share them with you... 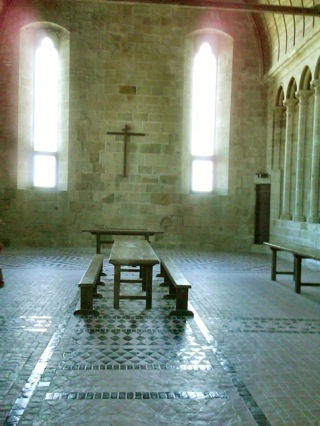 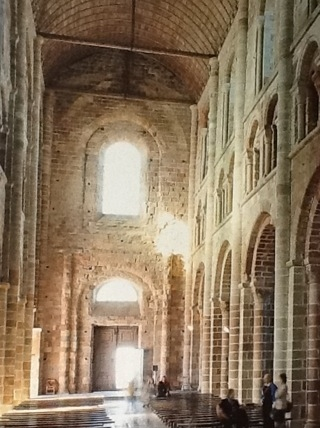 Going down the mount was much easier than climbing up, and there was still much to enjoy.
The textures of roof-tiles, here and there bright window-boxes, glimpses of the wide wet sands and people far below, the smell of sea and sun-warmed stone,gave way at last to the huddle of shops and souvenir traffic, and a return to the world. 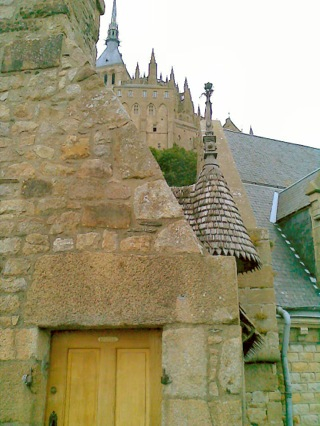 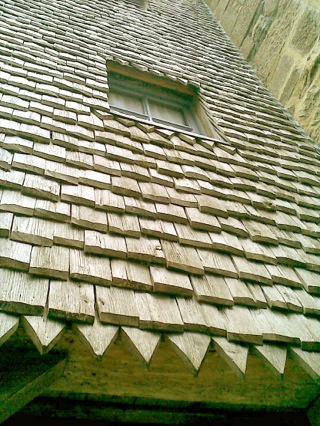 So we made our way slowly down the narrow way, with a different view at every turn, and reluctantly said goodbye to the quaint old town, making our way to the car, which was parked by the rocky shore.
There, watched by a very interested seabird, Carole and Peter set out a picnic table.
And what a picnic! Crusty French baguettes, butter, cheese, ham, grapes, yoghurts, all delicious and eaten in such a lovely place... 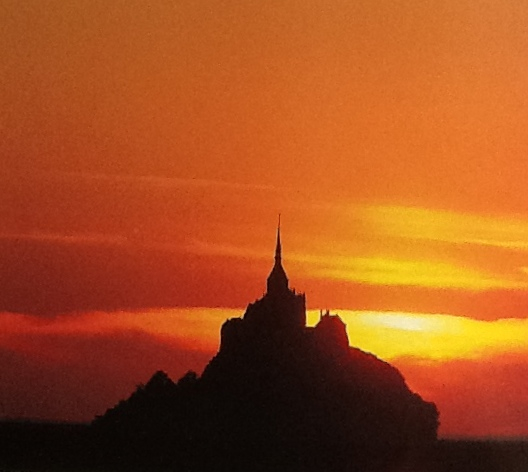 I have such happy memories of Mont Saint - Michel.
Do go, if you ever get a chance.
Meanwhile, enjoy the pictures!
< PrevNext >