A Reproach from the Past

Chief Seattle was chief of the Dwamish, Suquamish and allied Native American Tribes.
In January,1855 all their lands in Washington State were ceded to the government by the Treaty of Point Elliot.
The indigenous way of life was to disappear for ever.

The picture is of a Sioux chief,a professional study made when the white man was finally in charge of the Prairie.
It is part of the doctored image of history we have been left.
Beneath is part of a letter dictated and sent by Chief Seattle to the President, Franklin Pierce, in 1854.
Chief Seattle died in 1866, before the complete destruction of the traditional life-style of his tribe.
It is a deeply moving testimony to his love of the land and the riches with which we have all, red or white,been provided. 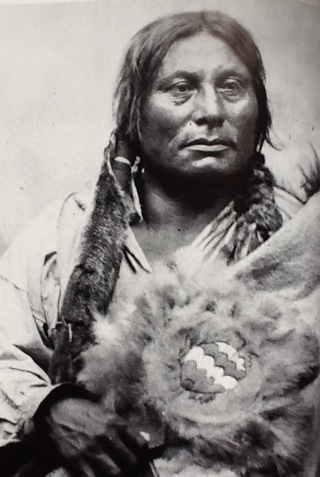 How can you buy or sell the sky, the warmth of the land?
The idea is strange to us.
If we do not own the freshness of the air and the sparkle of the water, how can you buy them?

The white man's dead forget the country of their birth when they go to walk among the stars.
Our dead never forget this beautiful earth, for it is the mother of the red man.
We are part of the earth, and it is part of us.
The perfumed flowers are our sisters; the deer, the horse, the great eagle, these are our brothers.
The rocky crests, the juices in the meadows, the body heat of the pony, and man-- all belong to the same family.

So, when the Great Chief in Washington sends word that he wishes to buy our land, he asks much of us.
The Great Chief sends word he will reserve us a place so that we can live comfortably to ourselves.
He will be our father and we will be his children.
So we will consider your offer to buy our land.
But it will not be easy.
For this land is sacred to us.

This shining water that moves in the streams and rivers is not just water but the blood of our ancestors.
The rivers are our brothers, they quench our thirst.
The rivers carry our canoes, and feed our children.
If we sell you our land, you must remember, and teach your children, that the rivers are our brothers, and yours, and you must henceforth give the rivers the kindness you would give any brother.
We know that the white man does not understand our ways.

One portion of land is the same to him as the next, for he is a stranger who comes in the night and takes from the land whatever he needs.
The earth is not his brother, but his enemy, and when he has conquered it, he moves on.
He kidnaps the earth from his children, and he does not care.
He treats his mother, the earth, and his brother, the sky, as things to be bought, plundered, sold like sheep or bright beads.
His appetite will devour the earth, and leave behind only a desert.

I do not know: our ways are different from your ways.
This we know: the earth does not belong to man; man belongs to the earth.
This we know.
All things are connected.
Man did not weave the web of life: he is merely a strand in it.
Whatever he does to the web, he does to himself.

Even the white man, whose God walks and talks with him as friend to friend, cannot be exempt from the common destiny.
We may be brothers after all.
We shall see.

One thing we know, which the white man may one day discover-- our God is the same God.

You may think now that you own Him as you wish to own our land; but you cannot.
He is the God of man, and His compassion is equal for the red man and the white.
This earth is precious to Him, and to harm the earth is to heap contempt on its Creator.
The whites too shall pass; perhaps sooner than all other tribes.
Contaminate your bed, and you will one night suffocate in your own waste.

But in your perishing you will shine brightly, fired by the strength of the God who brought you to this land and for some special purpose gave you dominion over this land and over the red man.

That destiny is a mystery to us, for we do not understand when the buffalo are all slaughtered, the wild horses are tamed, the secret corners of the forest heavy with the scent of many men, and the view of the ripe hills blotted by talking wires.
Where is the thicket? Gone.
Where is the eagle? Gone.

The end of living and the beginning of survival.


The battle for their old lifestyle was different for every tribe.
Often it meant death and bitter war.
This is Sitting Bull, chief of the Hunkpapa Sioux, who fought and defeated General Custer at the Battle of Little Bighorn in 1876. 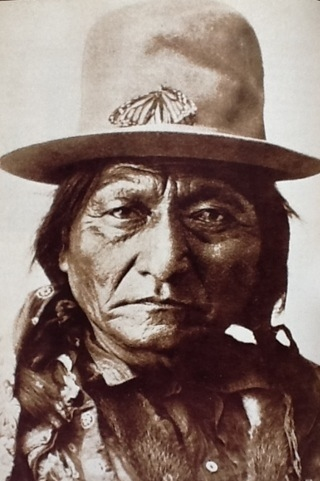 Buffalo were essential for the survival of Indian tribes, providing food, shelter and clothing.
Every part of the animal was used, and there was ecological balance.
That is, until the white man arrived..... 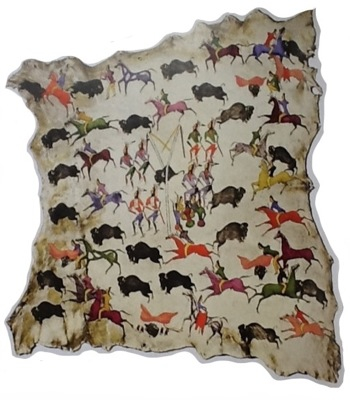 In the 1870s buffalo herds were being destroyed by white hunters, who took the skins for trade and often left the bloody carcasses to rot on the plains. 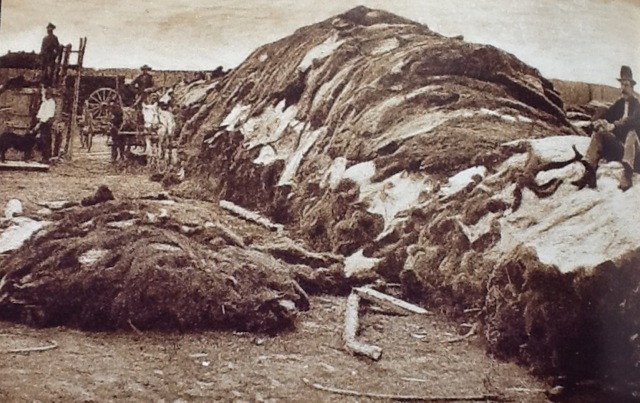 By 1890 buffalo were all but extinct. 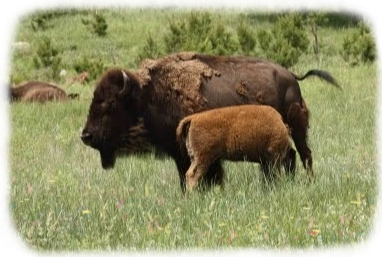 A poem by Vachel Lindsay

The flower-fed buffaloes of the spring

In the days of long ago,

Ranged where the locomotives sing

And the prairie flowers lie low:--

Is swept away by the wheat,

In the spring that still is sweet.

But the flower-fed buffaloes of the spring

Left us, long ago.

They gore no more, they bellow no more,

They trundle around the hills no more:--

With the Blackfeet, lying low,

With the Pawnees, lying low, 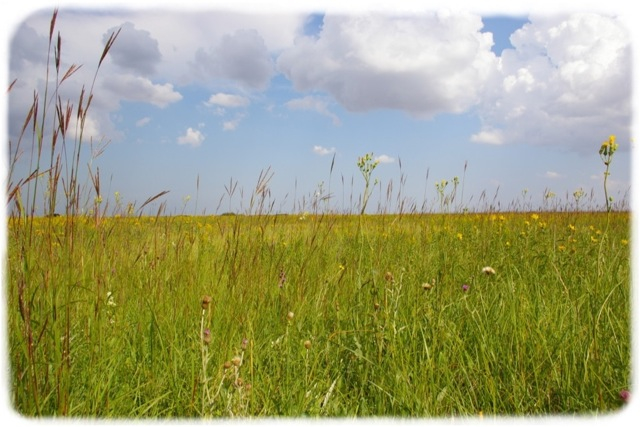