If you follow this website, you will certainly have gathered that I love books!
This article is about a favourite from my collection, a beautiful little book I bought in Buxton some years ago.
It is an Edinburgh edition, printed in October, 1911.
The cover is typical of the period.
It has illustrations(and, as Alice said, "What is the use of a book without pictures or conversations in it?") which are from watercolours by H.C.Preston Macgoun,R.S.W.
The title is 'Pet Marjorie.' 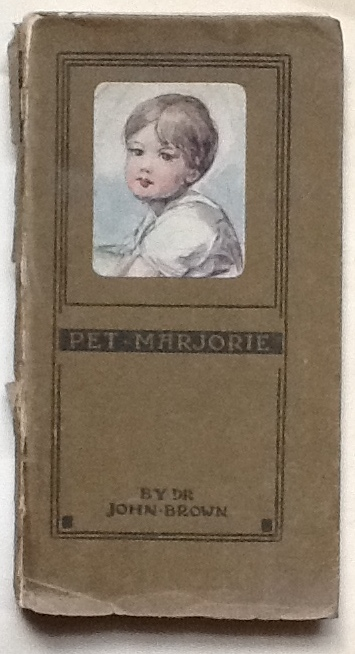 The book tells the story of the short life of a little girl, Marjorie Fleming(1803-11),who died of measles at the age of eight.
She lived in Edinburgh,and among her many friends and admirers was Sir Walter Scott, the famous novelist, who would recite to her and listen to her performing Shakespeare.
My book tells many stories of their friendship, and the pictures capture their moments of meeting.
She wrote a journal at a very early age, and her letters, poems and diaries have been published in many forms. 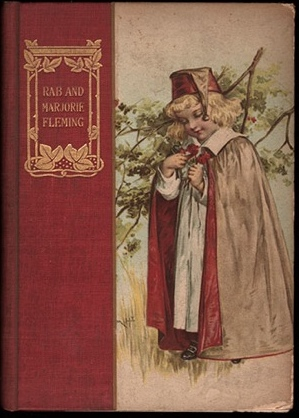 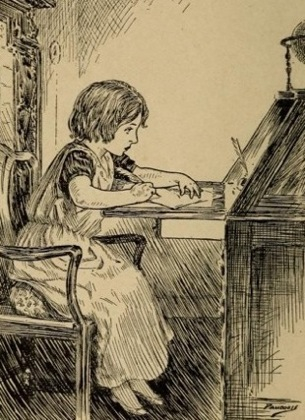 I bought the book, not just for its size(I like small things), or for its content, but because of one of the pictures, which as I stood in the shop and looked at it reminded me of an old black-and-white photo at home of my daughter when she was a child.
In the illustration Marjorie is talking excitedly to her old friend, and using her hands to help with the story.
In the photo Mary is talking animatedly to her Great-Aunt Blanche, and the lifted face and raised hands are so similar to those in the watercolour!
I have put the pictures here,together, to show you.

In the photo Mary is ready for bed.
She is wearing a winceyette nightie which I always liked,and could not throw away.
I kept it long after it was far too small,and for this article I found the bedroom drawer where it has been kept for years, and another keepsake from that time in her life, a test-tube with one of her fair curls inside. 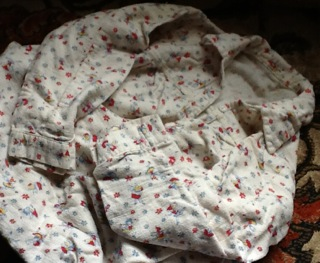 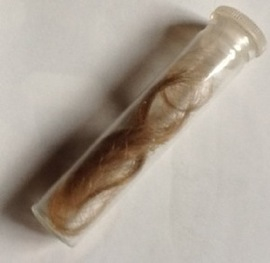 Now, back to the book!

I shall insert three of the watercolours of Marjorie with Sir Walter Scott.

Marjorie spent much of her sixth, seventh and eighth years in Edinburgh, where she was tutored by her cousin Isabella.
She began her first journal, when she was six, like this: 'Many people are hanged for Highway robbery Housebreking Murder &c &c. Isabella teaches me everything I know and I am much indebted to her she is learned witty and sensible.'
Her writing was always careful and she took her work seriously. 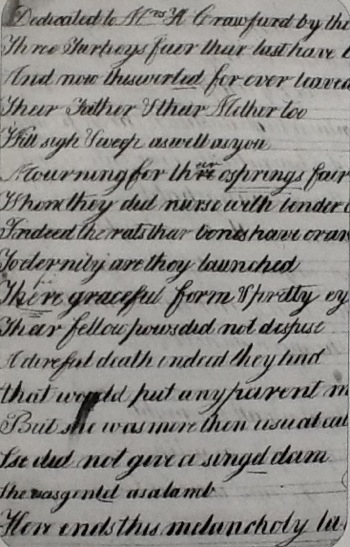 She wrote her first letter when she was five, and we can see what a sharp and critical observer she had already become (it must be said, she was as critical of herself as of others):
'My dear Isa, I now sit down to answer all your kind and beloved letters which you was so good as to write to me.
This is the first time I ever wrote a letter in my life.
There are a great many Girls in the Square and they cry just like a pig when we are under the painfull necessity of putting it to death.
Miss Potune a Lady of my acquaintance praises me dreadfully.
I repeated something out of Dean Swift and she said I was fit for the stage, and you may think I was primmed up with majestick Pride, but upon my word I felt myself turn a little birsay-birsay is a word that William composed which is as you may suppose a little enraged.
This horrid fat simpliton says that my Aunt is beautifull which is intirely impossible for that is not her nature.'

This from a five-year-old!

Here are other snippets from her Diary;
'The day of my existence has been delightful and charming.
I am at Ravelston enjoying nature's fresh air.
The birds are singing sweetly- the calf doth frisk and nature shows her glorious face.' 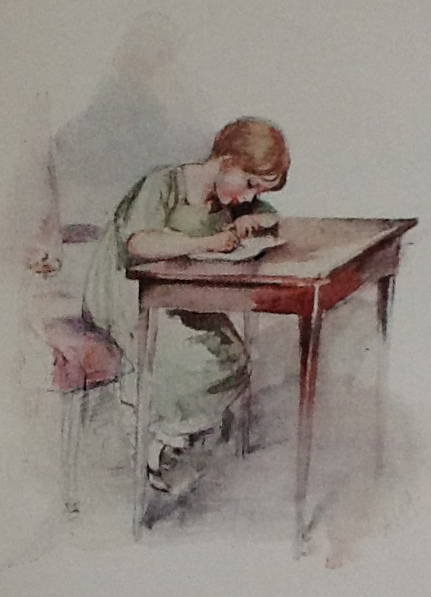 'I confess I have been very more like a divil than a creature for when Isabella went upstairs to teach me religion and my multiplication and to be good and all my other lessons I stamped with my foot and threw my new hat which she had made on the ground and was sulky and was dreadfully passionate, but she never whiped me but said Marjory go into. another room and think what a great crime you are committing letting your temper git the better of you.
.Isabella has given me praise for checking my temper for I was sulky even when she was kneeling an hole hour teaching me to write.' '
This is Saturday and I am very glad of it because I have play half the day and I get money too but alas I owe Isabella 4 pence because I am finned 2 pence whenever I bite my nails.
Isabella is teaching me how to make simme colings nots of interrigations peorids commoes(?), etc...
As this is Sunday I will meditate upon Senciable and Religious subjects.
First I should be very thankful I am not a begger.' '
I am going tomorrow to a delightful place, Braehead by name, belonging to Mrs. Crraford, where there is ducks cocks hens bubblyjocks 2dogs 2cats and swine which is delightful.
I think it is shocking to think that the dog and cat should bear them and they are drowned after all.
I would rather have a man-dog than a woman-dog, because they do not bear like woman-dogs; it is a hard case--it is shocking.
I am here to enjoy natures delightful breath it is sweeter than a fial of rose oil.' 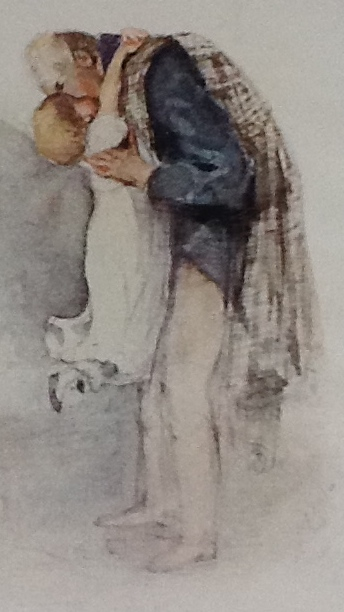 At six she ventured into verse.
Rhyme was very important to her, and sometimes affected sense.....

'EPHIBOL(EPIGRAM OR EPITAPH--WHO KNOWS WHICH?) ON MY DEAR ISABELLA.
Here lies sweet Isabell in bed,
With a night-cap on her head;
Her skin is soft, her face is fair,
And she has very pretty hair;
She and I in bed lies nice,
And undisturbed by rats or mice;
She is disgusted by Mr. Worgan,
Though he plays upon the organ.
Her nails are neat, her teeth are white,
Her eyes are very,very bright;
In a conspicuous town she lives,
And to the poor her money gives:
Here ends sweet Isabella's story,
And may it be much to her glory.'
'Of summer I am very fond,
And love to barhe into a pond;
The look of sunshine dies away,
And will not let me out to play;
I love the morning's sun to spy,
Glittering through the casement's eye,
The rays of light are very sweet,
And puts away the taste of meat;
The balmy breeze comes down from heaven,
And makes us like for to be living.'

Here are a few assorted opinions from her journals: '
The casawary is a curious bird, and so is the gigantic crane,and the pelican of the wilderness, whose mouth holds a bucket of fish and water.
Fighting is what ladies is not qualyfied for, they would not make a good figure in battle or in a duel.
Alas! We females are of little use to our country.
The history of all the malcontents as ever was hanged is amusing.'
'Braehead is extremely pleasant to me by the companie of swine, geese, cocks etc.,and they are the delght of my soul.'
'I am going to tell you of a melancholy story.
A young turkie of 2 or 3 months old, would you believe it, the father broke its leg, and he killed another!
I think he ought to be transported or hanged.' 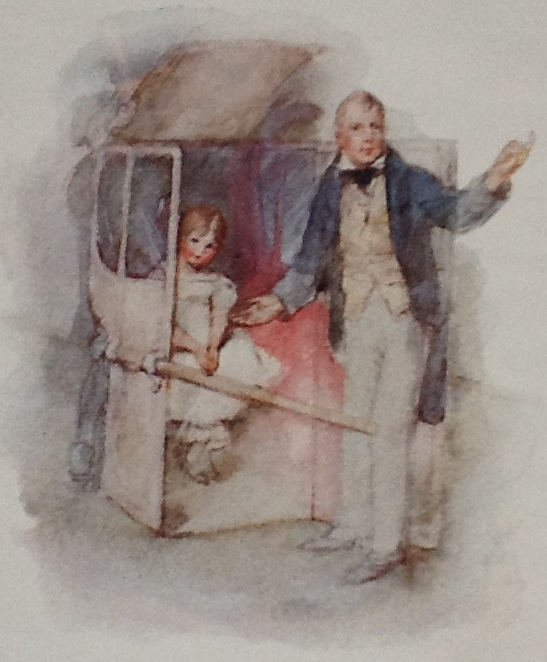 'Queen Street is a very gay one, and so is Princes Street, for all the lads and lasses, besides bucks and beggers, parade there.'
'Some days ago Isabella had a terrible fit of the toothake, and she walked with a long nightshift at dead of night like a ghost, and I thought she was one.
She prayed for nature's sweet restorer - balmy sleep - but did not get it - a ghostly figure indeed she was, enough to make a saint tremble.
It made me quiver and shake from top to toe.
Superstition is a very mean thing, and should be despised and shunned.'

One more poem:
'DEDICATED TO MRS.H.CRWAFORD BY THE AUTHOR,M.F.
Three turkeys fair their last have breathed,
And now the world for ever leaved;
Their father and their mother too,
They sigh and weep as well as you;
Indeed, the rats their bones have crunched,
Into eternity theire launched.
A direful death indeed they had,
As wad put any parent mad;
But she was more than usual calm,
She did not give a single dam.'

She was a very affectionate and openhearted child.
In one of her last letters to her mother, she wrote:
'I long for you with the longings of a child to embrace you-- to fold you in my arms.
I respect you with all the respect due to a mother.
You dont know how I love you.
So I shall remain, your loving child,
M.Fleming.' 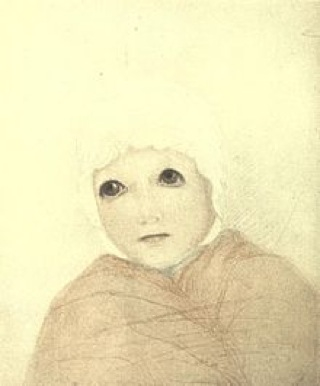 A watercolour of Marjorie, during her last illness.

Certainly Marjorie was a precocious child.
She read avidly, observed critically, loved and felt in a strangely mature way.

Her last wish, only a few hours before she died, was to be 'let out at the New Year'.
She wanted 'to purchase a New Year's gift for Isa Keith with the sixpence you gave me for being patient in the measles;and I would like to choose it myself.'

Three days before she died, she asked to be allowed to write a poem.
There was some doubt whether it would br right to allow this, for fear of hurting her eyes, but permission was granted, and rapidly she wrote fourteen lines, '

To my loved cousin, on the author's recovery.....

Oh! Isa, pain did visit me,
I was at the last extremity;
How often did I think of you,
I wished your graceful form to view,
To clasp you in my weak embrace,
Indeed I thought I'd run my race:
Good care, I'm sure, was of me taken,
But still, indeed, I was much shaken,
At last I daily strength did gain.
And oh! at last, away went pain;
At length the doctor thought I might
Stay in the parlor all the night;
I now continue so to do,
Farewell to Nancy and to you.'

She went to bed apparently well, but woke in the middle of the night crying "My head! My head!" and after three days of what was possibly meningitis her short and promising life was over.

Marjorie's manuscripts are now in the National Library of Scotland, but it was fifty years before her works were published.
They have since been read and enjoyed, and praised in writing, by many great writers.
During her life she was given many pet names: Madgie, Maidie, Muff and Muffy among others.
On her tombstone in the Kirkyard at Kirkcaldy is carved "Pet Marjorie." 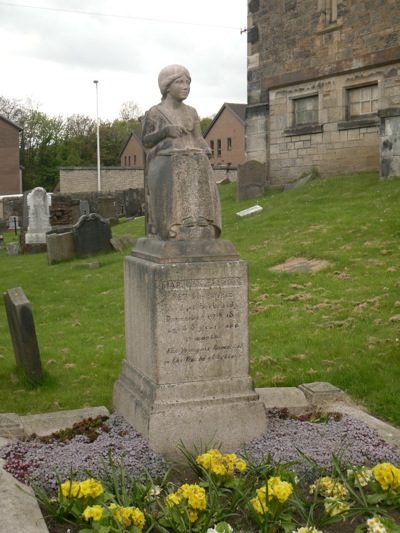