The Story of the Knollys Rose

For some years I was a member of All Hallows by the Tower, also known as All Hallows Barking, because in the 7th century it was built on land owned by the Abbess of Barking.
I loved to think that she would travel up the Thames from Barking Abbey by boat to attend Mass, and walk through the Saxon arch which still stands in the church today.
I was Sunday-School leader there, and some of the children lived in the Tower of London.

In 2002 I received an invitation to attend a ceremony which takes place in Seething Lane and began in 1381, the ceremony of the Knollys Rose. 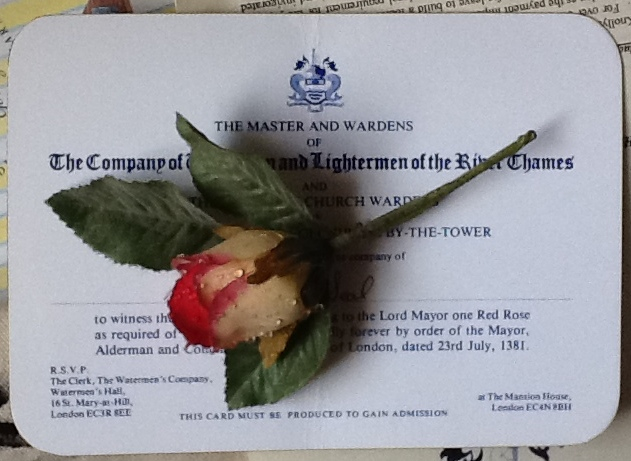 The invitation was from THE COMPANY OF WATERMEN AND LIGHTERMEN OF THE RIVER THAMES, and came from Watermen's Hall at 16, St. Mary-at-Hill.
It was an invitation 'to witness the ancient custom of rendering to the Lord Mayor one Red Rose as required of Sir Robert Knollys annually forever by order of the Mayor, Alderman and Commonalty of the City of London, dated 23rd July, 1381.'

There is a very interesting history to this yearly ceremony.
For over 600 years a single red rose has been cut from a garden in Seething Lane and presented to the Corporation of the City of London as payment for leave to build a footbridge across Seething Lane.
The footbridge has long since disappeared, and the legal requirement grew into the present formal ceremony and procession,which was first arranged by the Company of Watermen and Lightermen in 1960.

Sir Robert Knollys was a rich and prominent mercenary leader who in the second half of the 14th century led his armies into Europe and won great victories over the French.
His wife, Constance,sailed to support him in 1360 with three ships, 20 men at arms and 14 archers.
He was a respected citizen of London, and with Mayor Walworth assisted the King in putting down the Peasants' Revolt.
In 1381 he retired from Military Service and invested his loot in property.
Sir Robert owned a house on the West side in Seething Lane, or as it was called then 'Syendenlane in the Parish of All Hallows Berking-chirche'.
While he was away in France,his wife is reputed to have purchased a piece of land on the East side of Seething Lane-where the present-day garden is sited- and built a footbridge over the Lane from their house to her garden on the other side. 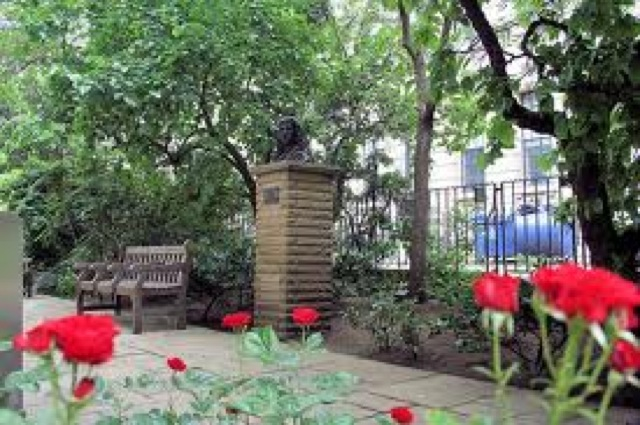 This was done without the equivalent of planning consent, and as a result the Corporation had to impose a fine.
Although it was a major offence, because of the position of Sir Robert as leading citizen and successful soldier the fine was no more than symbolic, a peppercorn rent.
Each year on the feast of St. John the Baptist(24thJune) one red rose was to be paid to the Lord Mayor.
The Ceremony has become one of the City's traditions.
The group of guests and officials gather in the garden. 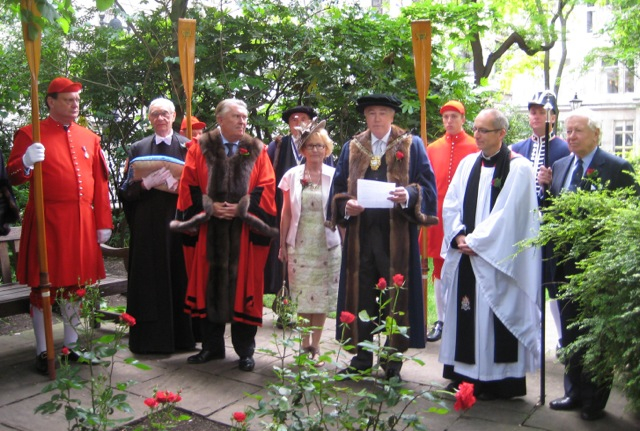 The rose is picked from the garden in Seething Lane, pinned on to the altar cushion from All Hallows,and carried in procession by the verger, the Vicar and Churchwardens, the Master of the Company,and a body of Watermen & Lightermen, followed by the invited guests, to Mansion House. 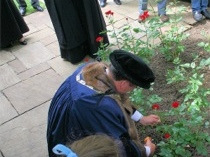 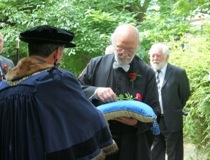 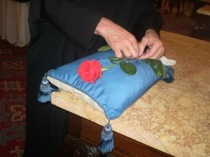 We were accompanied, much to my delight, by mounted Police, who stopped the traffic on the way.
I was, naturally, at the resr of the grand procession, but it was the first time I have been photographed by tourists!
Perhaps it was the police they were photographing? 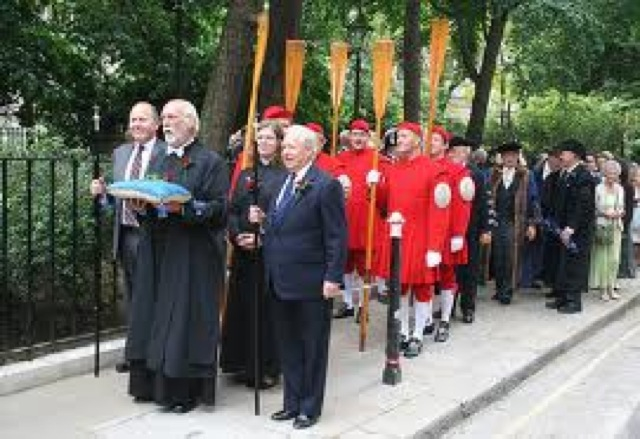 Once in the Mansion House, we were greeted with ample refreshments and wine, and each of us was given a beautiful silk rose, with artificial dewdrops, which made an apt souvenir.
The Watermen and Lightermen stood formally at their posts around the room, oars beside them; the Rose was formally presented, there was a welcome speech from the Lord Mayor, the vicar responded, more goodies(dare I say'seconds?') and we had a tour of the Mansion House, which I had never before entered. 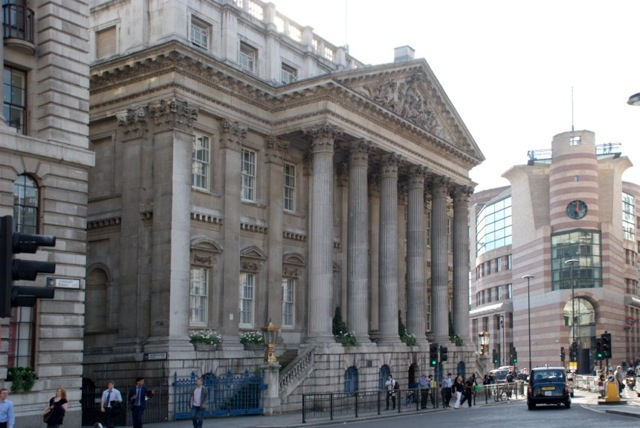 A very grand place indeed!
Used for all the formal receptions, grand dinners, speeches and award ceremonies which make up our Civic life, completely unknown to and apart from the humble citizen.
Gilded furniture, stained glass, statues, rich carpets.
Truly posh!
It was a very English occasion.

I still have my invite and the bedewed rose.
< PrevNext >