The 1837 Royal Academy exhibition opened at the beginning of May, and on June 20th Victoria ascended to the throne.
This painting by Landseer was a popular success, and his first of many in Queen Victoria's reign.
Looked at today, it appears simple and sentimental, but when first exhibited it received complimentary comments from many established critics, and was enthusiastically greetad in the press.
In the first volume of ' Modern Painters' (1843) Ruskin described it as ' one of the most perfect poems or pictures which modern times have seen.' 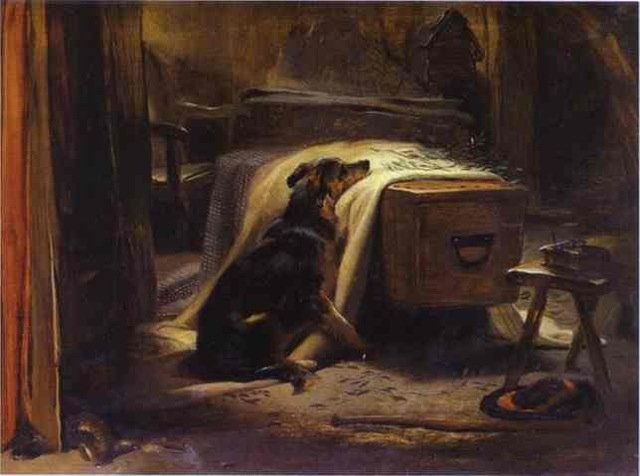 He went on to say, 'The exquisite execution of the glossy and crisp hair of the dog, the bright sharp touching of the green bough, the clear painting of the wood of the coffin and the folds of the blanket, are language - language clear and expressive in the highest degree.
But the close pressure of the dog's breast against the wood, the convulsive clinging of the paws, which has dragged the blanket off the trestle, the total powerlessness of the head, laid close and motionless, upon its folds, the fixed and tearful fall of the eye in its utter hopelessness, the rigidity of repose which marks that there has been no motion nor change in the trance of agony since the last blow was struck on the coffin-lid, the quietness and gloom of the chamber, the spectacles marking the place where the Bible was last closed, indicating how lonely has been the life, how unwatched the departure, of him who is now laid solitary in his sleep - these are all thoughts - thoughts by which the picture is separated at once from hundreds of equal merit, as far as mere painting goes, by which it ranks as a work of high art, and stamps its author, not as the neat imitator of the texture of a skin, or the fold of a drapery, but as the Man of Mind.' ( It strikes me that Ruskin used extremely long sentences!)
The painting was bought by a collector, John Sheepshanks, who presented it to the Victoria and Albert Museum in1857.
It was engraved by B.P. Gibbon in 1838, and became one of the best-selling prints of the century. 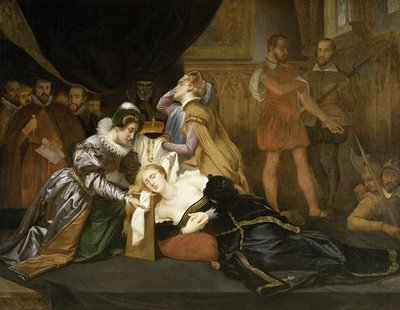 There are many stories of dogs who were loyal to their owners long after their death.
It is said that after the execution of Mary Queen of Scots a little Skye Terrier, named Geddon, crept out from her skirts and refused to leave her body.
He was covered in blood, and had to be carried away to be washed.


The story of Greyfriars Bobby, another Skye terrier who belonged to Auld Jock, a nightwatchman in Edinburgh, and for 14 years spent his days at the grave of his beloved master until he died himself in 1872, is recorded in books and films. 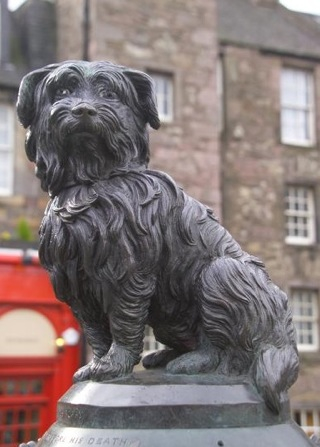 A rather less-publicised example of loyalty is commemorated in Corstophine Old Parish churchyard,where a stone brought down from the hillside records the death of John Foord, a shepherd who died in a snowstorm in 1795 and was found frozen on the mountain, with his dog beside him.
A small stone beside the larger one was carried down at the same time,and placed there in memory of the dog. 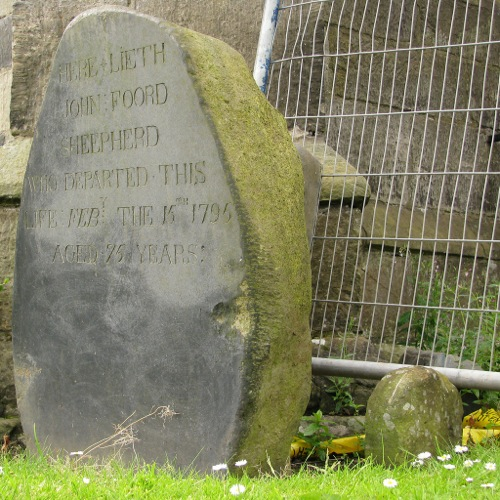 A strange thought; all of these stories have a Scottish connection!
< PrevNext >