So Fair a House Part 2

I have already told the history of the Russell-Cotes art Gallery and Museum in Bournemouth.
In this article I want to take you round East Cliff Hall, and show you some of its details.
It is a very impressive and beautiful building, and when given its listed status in 1992 was thus described: ' Cement rendered Italianate building of eccentric design, on steep slope, one storey to road, three storeys to garden....House set back, with pavilion roofs in bright red tiles and iron cresting....' Here you can see one of the pink marbled columns which are in some of the rooms and at the inside entrance steps.
The Russell-Coteses told their architect, John Frederick Fogerty, that they wanted a building with drama and vitality, rather than a strict adherence to one style.
They wanted something instantly recognisable from the Pier Approach; every visitor to Bournemouth would get a distant view of the sand-coloured,gilt-topped building with its red conical roofs, designed to attract attention and create debate. 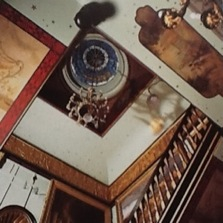 The interior of the building is rich in texture, colour and detail.
The artists John Thomas and his son Oliver were employed so that every room played its part in ensuring that East Cliff Hall would be seen as a major art object in its own right.
Although the building appears from the main entrance to be relatively modest, a visitor soon discovers that it extends in every direction. There is a stylish main staircase, a hall with pond and fountain, and everywhere wonderful stained glass, domes, roof lights, mosaics and decorative tiles. This is the alcove off the balcony.
Fogerty was influenced by the Arab Hall of Lord Leighton's famous studio residence, now the Leighton House Museum, and there are many oriental details in the overall design.
Every room is used to display the art collections, and paintings, statues, exotic artefacts, potted plants and palms fill every spare space.
Here are a selected few.
There are paintings from many periods. There are cabinets and shelves loaded with porcelain and objets d'art.
Here are a few examples of ornamental detail in the building. The doors, leading into the Drawing-room, are from a palace in Florence. The beautiful embossed wallpaper is from Tynecastle. In the bathroom is a spectacular mural of peacocks, a cockatoo and a monkey eating fruit in a formal garden.
Here are some of the bathroom tiles. I have never before been into the toilet in a Museum and felt that I was in somebody's house.
It was small and only had room for one, had period fittings with the old chain-pull and the original Poole pottery tiles.
Perhaps I had gone back in time? This gives some idea of the way every space is used for display.
I always had the feeling that I might suddenly meet the owners of the house.
The staircase, with its gilded knobs and thick carpet,is evidence of the status of the inhabitants.
The servants always used the back entrance and stairs, at a lower level, and were not visible in the main house.
There are so many things to see in this beautiful house that I left at every visit with real reluctance.

In the garden there are sculptures both ancient and modern. I feel that I have not been able to do justice to this remarkable Museum, which is both a house and a gallery.
The Russell-Coteses must have been a remarkable couple.
They intended to make their mark, and as far as I am concerned they certainly did!